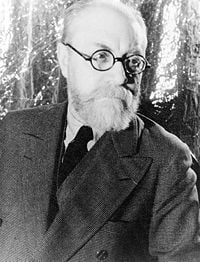 Henri Matisse (December 31, 1869 – November 3, 1954) was a French artist, noted for his use of color and his fluid, brilliant, and original draftsmanship. As a draughtsman, printmaker, and sculptor, but principally as a painter, Matisse is one of the best-known artists of the twentieth century. Matisse was one of the leaders of Les Fauves, a short-lived and loose grouping of early Modern artists whose works emphasized freshness and spontaneity and the use of deep color over the representational values retained by Impressionism. Fauvists simplified lines, made the subject of the painting easy to read, exaggerated perspectives, and used brilliant but arbitrary colors.

At the end of his life, Matisse, who had been baptized a Catholic but had not practiced his religion for many years, attempted a measure of reconciliation with his faith. He designed the Chapelle du Saint-Marie du Rosaire (Chapel of Our Lady of the Rosary), often referred to as the Matisse Chapel or the Vence Chapel, as a kind of spiritual challenge. Matisse considered the chapel his masterpiece, and it is recognized my many art critics as one of the greatest works of religious art of the twentieth century, a groundbreaking reconciliation of modernism with core values of traditional culture.

Born Henri-Émile-Benoît Matisse in Le Cateau-Cambrésis, Nord-Pas-de-Calais, France, he grew up in Bohain-en-Vermandois. In 1887 he went to Paris to study law, working as a court administrator in Le Cateau-Cambrésis after gaining his qualification. He first started painting during a period of convalescence following an attack of appendicitis, and discovered "a kind of paradise" as he later described it.[1] In 1891 he returned to Paris to study art at the Académie Julian and became a student of William-Adolphe Bouguereau and Gustave Moreau. Influenced by the works of the post-Impressionists Paul Cézanne, Gauguin, Van Gogh and Paul Signac, but also by Japanese art, Matisse made color a crucial element of his paintings from the beginning. Many of his paintings from 1899 to 1905 make use of a pointillist technique adopted from Signac.

His first exhibition was in 1901 and his first solo exhibition in 1904. His fondness for bright and expressive color became more pronounced after he moved southwards in 1905 to work with André Derain and spent time on the French Riviera. The paintings of this period are characterized by flat shapes and controlled lines, with expression dominant over detail. He became known as a leader of the Fauves (wild beasts), a group of artists which also included Derain, Georges Braque, Raoul Dufy and Maurice Vlaminck. The decline of the Fauvist movement after 1906 did nothing to affect the rise of Matisse; many of his finest works were created between 1906 and 1917 when he was an active part of the great gathering of artistic talent in Montparnasse. Matisse had a long association with the art collector Sergei Shchukin. He made one of his major works, La Danse (The Dance), especially for Shchukin.

He was a friend as well as rival of his younger contemporary Picasso, to whom he is often compared. A key difference between them is that Matisse drew and painted from nature, while Picasso was much more inclined to work from imagination. The subjects painted most frequently by both artists were women and still lifes, with Matisse more likely to place his figures in fully realized interiors.

Matisse lived in Cimiez on the French Riviera, now a suburb of the city of Nice, from 1917 until his death in 1954. His work of the decade or so following this relocation shows a relaxation and a softening of his approach. This "return to order" is characteristic of much art of the post-World War I period, and can be compared with the neoclassicism of Picasso and Stravinsky, and the return to traditionalism of Derain. After 1930 a new rigor and bolder simplification appear. In 1941 he was diagnosed with cancer and, following surgery, he started using a wheelchair. Matisse did not allow this setback to halt his work, and with the aid of assistants he set about creating cut paper collages, often on a large scale, called gouaches découpés. His Blue Nudes series feature prime examples of this technique; these demonstrate the ability to bring his eye for color and geometry to a new medium of utter simplicity, but with playful and delightful power.

The first painting of Matisse acquired by a public collection was "Still Life with Geranium" in 1910, today exhibited in the Pinakothek der Moderne in Munich.

Today, a Matisse painting can fetch as much as US $17 million. In 2002, a Matisse sculpture, "Reclining Nude I (Dawn)," sold for US $9.2 million, a record for a sculpture by the artist.

The Chapelle du Saint-Marie du Rosaire (Chapel of Our Lady of the Rosary), often referred to as the Matisse Chapel or the Vence Chapel is a small chapel built for Dominican nuns. [2] It was built in the small town of Vence on the French Riviera between 1949 and 1951 under an architectural plan proposed by Matisse. It houses a number of Matisse originals and was regarded by Matisse himself as his "masterpiece." While the simple white exterior has drawn mixed reviews from casual observers, many regard it as one of the great religious structures of the twentieth century.

In 1941, Matisse, who lived most of the year in Nice, France in the south of France, developed cancer and underwent surgery. During the long recovery he was particularly helped by a young part-time nurse, Monique Bourgeois, who took care of Matisse with great tenderness. Matisse asked her to pose for him, which she did, and several drawings and paintings exist. In 1943 Monique decided to enter the Dominican convent in Vence, a nearby hill town to Nice, and she became Sister Jacques-Marie. Matisse eventually bought a home at Vence, not far from the convent where the young nun was stationed. She visited him and told him of the plans the Dominicans had to build a chapel beside the girls' high school which they operated in Vence. She asked Matisse if he would help with the design of the chapel. He had never done anything like it, but Matisse agreed to help, beginning in 1947.

At the age of 77, Matisse began the greatest project of his life and spent more than four years working on the chapel, its architecture, its stained glass windows, its interior furnishings, its murals, and the vestments of the priests. It is perhaps the greatest ensemble artwork of the twentieth century, and certainly the greatest religious commission. While Matisse had been baptized a Catholic, he had not practiced the religion for many years. He designed the chapel as an artistic challenge.

The Chapel and Interior

The chapel is built on a hillside and one enters by descending a flight of stairs, and then turning to the right. The chapel is in an L shape, with the longer portion directly inside the door. The altar is placed at an angle where the two legs of the L join. The chapel is 15 meters long by 6 meters wide. The longer segment is for the students or townspeople; the shorter section was for the nuns who lived and taught at the school. Both sides face the altar.[3]

The altar is made of warm brown stone, chosen for its resemblance to the color of bread and the Eucharist. Matisse also designed the bronze crucifix on the altar, the candle holders in bronze, and the small tabernacle. The wrought iron candle holder with a flame always burning and hanging from the ceiling was made by local craftsmen who have a special tradition of making wrought iron.

There are three sets of stained glass windows, upon which Matisse spent a great deal of time. All three sets make use of just three colors: an intense yellow for the sun, an intense green for vegetation and cactus forms, and a vivid blue for the Mediterranean Sea, the Riviera sky and the Madonna. The two windows beside the altar are named the "Tree of Life," but the forms are abstract. The color from the windows floods the interior of the chapel, which is otherwise all white.

For the walls, Matisse designed three great murals to be made by painting on white tiles with black paint and then firing the large sections of tile. Each tile measures 12 inches.2. Matisse was so crippled with ailments by this time that he could only work from a wheelchair, and he had a long stick with a brush strapped to his arm and pieces of construction paper placed on the wall. He then drew the images, which were transferred to tiles by skilled craftsmen.

Behind the altar is a large image of Saint Dominic, founder of the Order of Dominicans and by tradition founder of the practice of the rosary for Catholics. He was a thirteenth century wandering preacher from Spain. His followers wear a white garment, or habit, with a panel hanging straight down the front. The simplest but most powerful of lines was created by Matisse to depict the saint.

On the side wall there are abstract images of flowers and an image of the Madonna and Child, all created in black outlines on the white tiles. Rather than clasping the child to herself, as she is usually depicted, Matisse chose to show Mary offering her son to the whole world.

On the back wall of the chapel are the traditional 14 stations of the cross. Although the 14 stations are usually depicted individually, Matisse incorporated all of them on one wall in one cohesive composition. The series begins at the bottom left as Jesus is brought before Pontius Pilate and condemned. The stations follow Jesus' progress carrying the cross. At the top in the center are the three most powerful images—the Raising of the Cross with Jesus' body nailed to it, the actual Crucifixion, and then Taking the Body of Jesus Down. The center panel has a straight vertical and horizontal composition, while the two surrounding stations have strong diagonal lines leading to the head of Jesus on the cross.

Matisse also designed the priests' vestments for the chapel, using the traditional ecclesiastical colors of the religious seasons: purple, black, pink/rose, green, and red. The Pope requested that the nuns send the vestments to Rome to be put in the Vatican's new museum of modern religious art. The nuns made copies of five of the sets of vestments, including chasuble, maniple, stole, and covering of the chalice, and sent them to Rome.

There are two doors in carved wood, designed by Matisse, for the confessionals. Along the hallway to the gift shop are photos of Matisse designing the chapel. There are also some of Matisse's original sketches for the Stations and vestments. Maquettes for all the vestments made, as well as for a number never actualized, were made by Matisse on brown wrapping paper and black construction paper. They can be seen in the Pompidou Center in Paris.