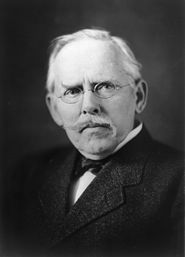 Jacob August Riis (May 3, 1849 – May 26, 1914), was a Danish-born American muckraker journalist, photographer, and social reformer. He is known for his dedication to using his photojournalistic talents to help the less fortunate in New York City, which was the subject of most of his prolific writings and photographic essays. As one of the first photographers to use flash, which allowed him to document the reality of people's situations in the dark slum areas at night, he is considered a pioneer in photography.

Jacob Riis' work initiated reforms toward better living conditions for the thousands of people living in poorhouses in New York City slums. His photography, taken up to help him document the stories, became an important tool in his fight. Riis was remarkably successful in using his photographic skill to educate and inform, leading those such as Theodore Roosevelt who were in positions to make changes to do so. In coining the epithet "Muckraker" to describe those such as Riis, Roosevelt noted that in looking down and exposing the problems (the "muck"), they run the risk of only looking down and becoming ensconced in the filth themselves. Riis, however, was able to maintain his optimism, his belief that every human being had the potential to achieve happiness. Thus, he impacted in a positive way the American society of which he became part. Yet, he retained certain attitudes, prejudices against women and those of other ethnicities than himself. In contemporary society Riis would have been challenged more seriously to overcome such bias.

Jacob Riis was born in Ribe, Denmark, the third of fifteen children of Niels Riis, schoolteacher and editor of the local newspaper, and Carolina Riis, a homemaker. Riis was influenced both by his stern father and by the authors he read, among whom Charles Dickens and James Fenimore Cooper were his favorites. At age 11, Riis's younger brother drowned. Riis would be haunted for the rest of his life by the images of his drowning brother and of his mother staring at his brother's empty chair at the dinner table. At 12, Riis amazed all who knew him when he donated all the money he received for Christmas to a poor Ribe family, at a time when money was scarce for anyone. When Riis was 16, he fell in love with Elisabeth Gortz, but was rejected. He moved to Copenhagen in dismay, seeking work as a carpenter.

Immigration to the United States

Riis moved to the United States in 1870, when he was 21. He arrived during an era of social turmoil. Large groups of migrants and immigrants flooded urban areas in the years following the Civil War seeking prosperity in a more industrialized environment. Twenty-four million people moved to urban centers, causing a population increase of over 700 percent. 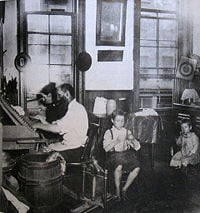 Bohemian cigarmakers at work in their tenement.

The demographics of American urban centers grew significantly more heterogeneous as immigrant groups arrived in waves, creating ethnic enclaves often more populous than even the largest cities in the homelands. Riis found himself just another poor immigrant in New York City. His only companion was a stray dog he met shortly after his arrival. The dog brought him inspiration and when a police officer mercilessly beat it to death, Riis was devastated. One of his personal victories, he later confessed, was not using his eventual fame to ruin the career of the offending officer. Riis spent most of his nights in police-run poorhouses, whose conditions were so ghastly that Riis dedicated himself to having them shut down.

At the age of 25, Riis wrote to Elisabeth Gortz to propose a second time. This time she accepted, and joined him in New York City. She became a great support in his work. 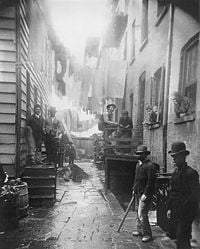 Bandit's Roost by Jacob Riis, 1888, from How the Other Half Lives. The image is taken at 59½ Mulberry Street, considered the most crime-ridden, dangerous part of New York City.

Riis held various jobs before he accepted a position as a police reporter in 1873 with the New York Evening Sun newspaper. In 1874, he joined the news bureau of the Brooklyn News, working there for three years. In 1877, he became a police reporter, this time for the New York Tribune. During these stints as a police reporter, Riis worked the most crime-ridden and impoverished slums of the city. Through his own experience in the poorhouses, and witnessing the conditions of the poor in the city slums, he decided to make a difference for those who had no voice.

Riis was one of the first photographers in United States to use flash powder, allowing his documentation of New York City slums to penetrate the dark of night, and helping him capture the hardships faced by the poor, especially on the notorious Mulberry Street. In 1889, Scribner's Magazine published Riis's photographic essay on city life, which Riis later expanded to create his magnum opus How the Other Half Lives. Riis believed that potential of every individual was to achieve happiness. In his Making of An American (1901) he wrote:

”Life, liberty, pursuit of happiness? Wind! says the slum, and the slum is right if we let it be. We cannot get rid of the tenements that shelter two million souls in New York today, but we can set about making them at least as nearly fit to harbor human souls as might be.” 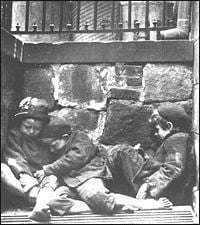 Riis’s How the Other Half Lives was directly responsible for convincing then-Commissioner of Police Theodore Roosevelt to close the police-run poorhouses. After reading it, Roosevelt was so deeply moved by Riis' sense of justice that he met Riis and befriended him for life, calling him "the best American I ever knew." Roosevelt himself coined the term "muckraking journalism," of which Riis is a recognized example.

In 1905, Riis’ wife grew ill and died. In 1907, he remarried, and with his new wife Mary Phillips, moved to a farm in Barre, Massachusetts. Riis' children came from this marriage.

Riis died on May 26, 1914, at his Massachusetts farm. His second wife would live until 1967, continuing work on the farm, working on Wall Street, and teaching classes at Columbia University.

Contemporary critics have noted that, despite Riis' sense of populist justice, he had a deprecating attitude towards women and people of certain ethnic and racial groups. In his autobiography, The Making of an American, Riis decided to allow his wife to add a chapter examining her own life. After letting her begin an honest and evocative biographical sketch over several pages titled "Elisabeth Tells Her Story," Riis cut half of her story, saying: "...it is not good for woman to allow her to say too much."

Furthermore, Riis' writings revealed his prejudices against certain ethnic groups, cataloging stereotypes of those with whom he had less in common ethnically. Riis’ middle class and Protestant backgrounds weighed heavily in his presentation of How the Other Half Lives. Both instilled a strong capitalist idealism; while he pitied certain poor examined as worthy, many others he viewed with contempt. According to Riis, certain races were doomed to failure, as certain lifestyles caused families’ hardships. An example of Riis' ubiquitous ethnic stereotyping is seen in his analysis of how various immigrant groups master the English language:

"Unlike the German, who begins learning English the day he lands as a matter of duty, or the Polish Jew, who takes it up as soon as he is able as an investment, the Italian learns slowly, if at all" (Riss 1890).

Jacob Riis was a reporter, a photographer, photojournalist, and "muckraker" journalist, whose work initiated reforms toward better living conditions for the thousands of people living in poorhouses in New York City slums. His photography, taken up to help him document his story, became an important tool in his fight. With it he became important figure in the history of documentary photography.

Numerous memorials around New York City carry Riis’ name. Among others, Jacob Riis Park and Jacob Riis Triangle, both located in Queens, are named after him. The Jacob August Riis School, a New York City public school in Manhattan's Lower East Side is also named after Riis. Jacob Riis Settlement House, a multi-service community based organization, is located in the Queensbridge Houses, in Long Island City, Queens.

Retrieved from https://www.newworldencyclopedia.org/p/index.php?title=Jacob_Riis&oldid=1009714
Categories:
Hidden category:
This page was last edited on 12 March 2018, at 19:30.
Content is available under Creative Commons Attribution/Share-Alike License; additional terms may apply. See Terms of Use for details.