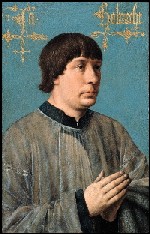 Jacob Obrecht (1457/1458 – late July, 1505) was a Flemish composer of Renaissance music. He was the most famous composer of masses in Europe in the late fifteenth century, only being eclipsed by Josquin Desprez after his death. In addition, Obrecht wrote many motets and songs. For his source material he preferred the popular chansons of the day. While it may seem unusual that a composer would build a sacred composition upon fragments of secular, even profane popular songs, this procedure was neither considered improper nor even particularly irreverent at the time. Though he was renowned in his time, Obrecht had little influence on subsequent generations. However the superabundant inventiveness seen in his works is analogous to the contemporary style of painting, shown most famously by Hieronymus Bosch.

He was born in either 1457 or 1458, the only son of Ghent city trumpeter Willem Obrecht and Lijsbette Gheeraerts. His mother died in 1460 at the age of 20. His portrait, painted in 1496, gives his age as 38, establishing his birth date.

Details of his early education are sparse, but he likely learned to play the trumpet, like his father, and in so doing learned the art of counterpoint and improvisation over a cantus firmus. Most likely he knew Antoine Busnois at the Burgundian court; nonetheless, he certainly knew his music, since his earliest mass shows close stylistic parallels with the elder composer.

Obrecht seems to have had a succession of short appointments, many of which ended in less than ideal circumstances. At least twice he was in trouble for financial irregularities, more likely from careless bookkeeping than anything else; there is one interesting record of his covering a shortfall in his accounts by a donation of his compositions to his employer. Throughout the period, though as an employee he may have been undesirable, he was held in the highest respect both by his patrons and by the composers who were his peers. Tinctoris, who was writing in Naples, singles him out in a short list of the master composers of the day—all the more significant because he was only 25 at the time Tinctoris made his list, and on the other side of Europe.

While most of Obrecht's appointments were in Flanders in the Netherlands, he made at least two trips to Italy, once in 1487 at the invitation of Duke Ercole d'Este I of Ferrara, and again in 1505. Duke Ercole had heard Obrecht's music, which is known to have circulated in Italy between 1484 and 1487, and said that he appreciated it above the music of all other contemporary composers; consequently he invited Obrecht to Ferrara for six months in 1487.

In 1504 Obrecht once again went to Ferrara, but on the death of the Duke at the beginning of the next year he became unemployed. In what capacity he stayed in Ferrara is unknown, but he died in the outbreak of plague there just before August 1, 1505.

Stylistically, Obrecht is a fascinating example of the contrapuntal extravagance of the late fifteenth century. He usually uses a cantus firmus technique for his masses, but uses a staggering variety of constructive devices in transforming simple source material into multi-movement mass compositions. Sometimes he takes his source material and divides it up into short phrases; sometimes he uses retrograded versions of complete melodies, or melodic fragments; in one case he even extracts the component notes and orders them by note value, long to short, constructing new melodic material from the reordered sequences of notes. He prefers episodic structures, where each section of a work uses different motivic material: clearly to Obrecht there could not be too much variety. His procedures show a startling contrast to the work of the next generation; for example Josquin, favored unity and simplicity of approach.

For his source material, he clearly preferred the popular chansons of the day. While it may seem strange to a modern listener that a composer would build a sacred composition upon fragments of secular, even profane popular songs, this procedure was neither considered improper nor even particularly irreverent at the time (for example, there is a mass by Mouton—Missa faulte d'argent ["lack of money"]—based on Josquin's chanson of the same name in which a man wakes up in bed with a prostitute, realizing painfully that he does not have enough money to pay her).

His late four-voice mass, Missa Maria zart, tentatively dated to around 1504, is based on a devotional song popular in the Tyrol, which he probably heard as he went through the region around 1503 to 1504. Requiring more than an hour to perform, it is one of the longest polyphonic settings of the mass Ordinary ever written. Its sound-world is uniform, with few of the sharp textural contrasts found in Ockeghem; in this regard it looks ahead to the composers of the early sixteenth century, including Josquin des Prez, who may have been influenced by this and other compositions by Obrecht.

Though he was renowned in his time, Obrecht had little influence on subsequent generations: most likely he simply went out of fashion. The superabundant inventiveness seen in his works is an interesting analogue to the contemporary style of painting, shown most famously by Hieronymus Bosch (also born in 1450).

Retrieved from https://www.newworldencyclopedia.org/p/index.php?title=Jacob_Obrecht&oldid=1009713
Categories:
Hidden category:
This page was last edited on 12 March 2018, at 19:28.
Content is available under Creative Commons Attribution/Share-Alike License; additional terms may apply. See Terms of Use for details.