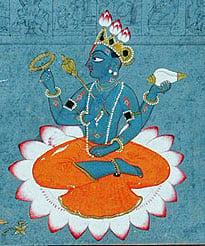 Vishnu, seated in the lotus position on a lotus.

Within the religion of Hinduism, the term Ishta-deva (or Ishta devata) (Sanskrit: işţadevatā) denotes a worshipper's preferred (or beloved) divinity. Hinduism permits a wide range of deities to be worshiped, allowing practitioners to choose the form of God that inspires them the most. For many Hindus, the sincerity of one's worship is more important than the actual name/form of the worship because the various deities are often seen to be themselves manifestations of the great Brahman (the formless Absolute). Although sectarian Vaishnavism places special focus on Vishnu, it is often one of his avatars (i.e Krishna or Rama) that is worshipped. Similarily, Shaktism may focus on a particular form of the Goddess such as Parvati or Lakshmi.

The Hindu doctrine of Ishta-deva underscores the tolerance and acceptance that Hinduism has for religious pluralism, which allows multiple paths to salvation. Hinduism champions the idea of spiritual oneness in the concept of Brahman. Vedic phrases such as Ekam Sat, Vipraha Bahudha Vadanti (Truth is One, though the sages know it as many) (Rig Veda 1:164:46) suggest that the Hindu sages had an awareness of a deeper unified reality underlying the multiplicity of physical forms.

The Sanskrit word işţadevatā or işţadevaḥ is a compound of işţa (desired, liked, reverenced) and devatā (a deity or divine being). It is defined by V. S. Apte as "a favorite god, one's tutelary deity."[1]

There is no universally accepted perspective of God throughout the various branches of Hinduism, and thus the specific nature of belief and worship regarding a practitioner's Ishta-deva depends largely on which tradition they are following. Adherents of the monistic schools (such as Advaita Vedanta) worship multiple forms of God as emanations from the ultimately formless Brahman, whereas followers of the bhakti traditions may worship a particular form (or avatar) of Vishnu, Shiva or Ganesha as the Supreme God (Ishvara).

Famous examples of Ishta-deva from the Hindu scriptures are Hanuman and Tulsidas whose Ishta-deva was Lord Rama, and Mirabai, who was a devotee of Krishna.

The "worship of the five forms" (pañcāyatana pūjā) system, which was popularized by the ninth-century philosopher Śaṅkarācārya among orthodox Brahmins of the Smarta tradition, invokes the five deities Ganesha, Vishnu, Shiva, Devī, and Surya.[2][3] This system was instituted by Śaṅkarācārya primarily to unite the principal deities of the five major sects (Gāṇapatya, Śaiva, Vaiṣṇava, Shakta and Sūrya) on an equal status. The monistic philosophy preached by Śaṅkarācārya made it possible to choose one of these as a preferred principal deity and at the same time worship the other four deities as different forms of the same all-pervading Brahman.

Typically a practitioner worships their Ishta-deva through the form of a murti. This worship may involve offering items to their chosen divinity, such as incense or flowers, or reciting mantras, singing their names and offering prayers.

Remembering the deity and internally building a relationship with (or through) the deity is considered essential to the practice. Within some Advaita schools it is believed that the human mind needs a concrete form to understand the divine that ultimately can never be defined. Just as one can understand the abstract concept of a color only after one has seen a concrete form, one can only realize the deity through a form of murti. In contrast, other schools believe the Supreme Being to possess a divine form, and offer worship to their Ishta-deva as either a representation or direct expansion of the Supreme Person.

Shaivites worship Shiva, either figuratively, or through his Lingam murti. As Shaivism contains both monistic and dualistic traditions, either (or both) of the above approaches may be applicable.

Within a number of Hindu traditions, both present and in the past, living people have claimed (or are claimed by followers) to be avatars of a divine or Supreme being. In these cases, followers have then in some instances worshipped these individuals as Ishta-devas. This practice has been growing in modern times (the followers of Satya Sai Baba being one such example). Some Hindus object to this development and see it as abuse of the avatar doctrine:

"The avatar doctrine has been excessively abused by many Hindus today and we have the strange phenomenon of every disciple of a sectarian Guru claiming him to be an avatar. Christianity has therefore limited the Divine Incarnation as a one-time phenomenon. The theory has strong points and equally strong defects but it surmounts the gross abuse of the doctrine indulged in by many Hindus."[4]

Swami Sivananda has said that a guru can be likened to God if he himself has attained realization and is a link between the individual and the Absolute. Such a guru, according to his definition and interpretation, should have actually attained union with God, inspire devotion in others, and have a presence that purifies all. Such a case is limited in contemporary times.

In Vajrayana Buddhism, an Ishta-deva or Ishta-devata (Sanskrit) (Yidam in Tibetan) is an enlightened being who is the focus of personal meditation, during a retreat or for life. The term is often translated into English as meditational deity. The Ishta-deva appears in the 'Inner' refuge formula of the "Three Roots" and is also the key element of Deity Yoga since the 'deity' is itself the Ishta-deva.

An Ishta-deva is an enlightened being with whom one identifies during meditation: one perceives his or her own Buddha nature through such identification. The iconography of the Ishta-deva may be 'peaceful', 'wrathful' (Tibetan tro wa) or 'neither peaceful or wrathful' (Tibetan: shi ma tro), depending on the practitioner's own nature.[5] The Ishta-deva, which can be masculine or feminine, may refer to the personal deity, the nature of which corresponds to the individual psychological temper of each adept. It represents awakening and so its appearance reflects whatever is required by the practioner in order to awaken. The guru will guide the student as to which Ishta-deva is appropriate for them and then initiation into the mandala of the Ishta-deva is given by the guru, so that Deity Yoga practices can be undertaken. In essence, the mind of the guru and the yidam are one. The yidam is considered to be the root of success in the practice.

Some common Ishta-devas include Hayagriva, Vajrakilaya (Dorje Phurba), Samputa, Guhyasamaja, Yamantaka, Hevajra, Kurukulle, Cakrasamvara, Vajrayogini, and Kalachakra. Other enlightened beings such as the regular forms of the Buddhas, Bodhisattvas, Padmasambhava, certain Dharmapalas, Dakinis, Wealth Deities, and yab-yum representations, among others, can also be practiced as an ishta-deva.

Ishta-devas are both a specific Buddha-form and the student's basic nature or potential to become a Buddha. The student visualizes the outstanding characteristics of the ishta-deva until he achieves complete union with it. Judith Simmer-Brown summarizes:

"... a yidam, a personal meditational deity, a potent ritual symbol simultaneously representing the mind of the guru and lineage of enlightened teachers, and the enlightened mind of the tantric practitioner. Recognizing the inseparability of these two is the ground of tantric practice."[6]

Retrieved from https://www.newworldencyclopedia.org/p/index.php?title=Ishta-deva&oldid=1009569
Categories:
Hidden category:
This page was last edited on 6 March 2018, at 23:18.
Content is available under Creative Commons Attribution/Share-Alike License; additional terms may apply. See Terms of Use for details.