George Canning (April 11, 1770 – August 8, 1827) was a British statesman and politician who served as Foreign Secretary and, briefly, Prime Minister. Canning rose quickly in British politics as an effective orator and writer. His speeches in Parliament as well as his essays gave the followers of William Pitt the Younger a rhetorical power they had previously lacked. Canning's skills saw him gain leverage within the Pittite faction that allowed him influence over its policies along with repeated promotions in the Cabinet. Over time, Canning became a prominent public speaker as well, and was one of the first politicians to campaign heavily in the country.

As a result of his charisma and promise, Canning early on drew to himself a circle of supporters who would become known as the Canningites. Conversely though, Canning had a reputation as a divisive man, as many felt alienated by him. His most significant achievements included support for various freedom struggles against imperial rule and in helping to restrict the great powers from undue interference in the affairs of other nations. He recognized the independence from Spain of emerging republics in the New World, and famously suggested that the Old World needed the New World to amend for its mistakes. He supported the Greeks in their revolt against the Ottoman Empire, and prevented France from helping Spain crush rebellions in the Americas.

Canning was born in Marylebone, London. His father, George Canning Sr. of Garvagh, County Londonderry, was a gentleman of limited means, a failed wine merchant and lawyer, who renounced his right to inherit the family estate in exchange for payment of his substantial debts. George Sr. eventually abandoned the family and died in poverty on April 11, 1771, his son's first birthday, in London. Canning's mother, Mary Ann Costello, took work as a stage actress, a profession not considered respectable at the time.

Because Canning showed unusual intelligence and promise at an early age, family friends persuaded his uncle, London merchant Stratford Canning (father to the diplomat Stratford Canning), to become his nephew's guardian. George Canning grew up with his cousins at the home of his uncle, who provided him with an income and an education. Stratford Canning's financial support allowed the young Canning to study at Eton College and Christ Church, Oxford.

While at school, Canning gained renown for his skill in writing and debate. He struck up friendships with Lord Liverpool, Granville Leveson-Gower, and John Hookham Frere. Canning began practicing Law after receiving his BA from Oxford in the summer of 1791. Yet, he wished to enter politics. 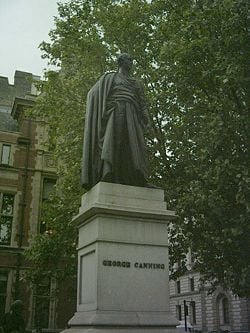 Stratford Canning was a Whig and would introduce his nephew, in the 1780s, to prominent Whigs such as Charles James Fox, Edmund Burke, and Richard Brinsley Sheridan. George Canning's friendship with Sheridan would last for the remainder of Sheridan's life.

George Canning's impoverished background and limited financial resources, however, made unlikely a bright political future in a Whig party whose political ranks were led mostly by members of the wealthy landed aristocracy in league with the newly rich industrialist classes. Regardless, along with Whigs such as Burke, Canning himself would become considerably more conservative in the early 1790s, after witnessing the excessive radicalism of the French Revolution.

So when Canning decided to enter politics he sought and received the patronage of the leader of the "Tory" group, William Pitt the Younger. In 1793, thanks to the help of Pitt, Canning became a Member of Parliament for Newtown.

On November 2, 1795, Canning received his first ministerial post: Under Secretary of State for Foreign Affairs. In this post he proved a strong supporter of Pitt, often taking his side in disputes with the Foreign Secretary Lord Grenville. He resigned this post on April 1, 1799.

In 1799, Canning became a commissioner of the Board of Control, followed by Paymaster of the Forces in 1800. When Pitt the Younger resigned in 1801, Canning loyally followed him into opposition and again returned to office in 1804, with Pitt, becoming Treasurer of the Navy.

Canning left office with the death of Pitt the Younger, but was appointed Foreign Secretary in the new government of the Duke of Portland the following year. Given key responsibilities for the country's diplomacy in the Napoleonic Wars, he was responsible for planning the terror attack on Copenhagen in September 1807, much of which he undertook at his country estate, South Hill Park at Easthampstead in Berkshire.

In 1809, Canning entered into a series of disputes within the government that were to become famous. He argued with the Secretary of State for War and the Colonies, Lord Castlereagh, over the deployment of troops that Canning had promised would be sent to Portugal, but which Castlereagh sent to the Netherlands. The government became increasingly paralyzed in disputes between the two men. Portland was in deteriorating health and gave no lead, until Canning threatened resignation unless Castlereagh was removed and replaced by Lord Wellesley. Portland secretly agreed to make this change as soon as it became possible.

Castlereagh discovered the deal in September of 1809, and became furious, demanding redress. He challenged Canning to a duel, and Canning accepted. It was fought on September 21, 1809. Canning had never before fired a pistol. In the duel Canning missed; Castlereagh wounded his opponent in the thigh. There was much outrage that two cabinet ministers had resorted to such a method. Shortly afterwards the ailing Portland resigned as Prime Minister and Canning offered himself to George III as a potential successor. However, the King appointed Spencer Perceval instead, and Canning left office once more. He did take consolation though, in the fact that Castlereagh also stood down.

Upon Perceval's assassination in 1812, the new Prime Minister, Lord Liverpool offered Canning the position of Foreign Secretary once more. Canning refused, as he also wished to be Leader of the House of Commons and was reluctant to serve in any government with Castlereagh. In 1814, he became the British Ambassador to Portugal, returning the following year. He received several further offers of office from Liverpool and in 1816, he became President of the Board of Control.

Canning resigned from office once more in 1820, in opposition to the treatment of Queen Caroline, estranged wife of the new King George IV. Canning and Caroline were personal friends.

In 1822, Castlereagh, now Marquess of Londonderry, committed suicide. Canning succeeded him as both Foreign Secretary and Leader of the House of Commons. In his second term of office he sought to prevent South America from coming into the French sphere of influence and in this he was successful. He also gave support to the growing campaign for the abolition of slavery. Despite personal issues with Castlereagh, he continued many of his foreign policies, such as the view that the powers of Europe (Russia, France, etc.) should not be allowed to meddle in the affairs of other states. This policy enhanced public opinion of Canning as a liberal. He also prevented the United States from opening trade with the West Indies.

Liverpool retired as Prime Minister in 1827, and Canning was chosen to succeed him, in preference to both the Duke of Wellington and Sir Robert Peel. Neither man agreed to serve under Canning and they were followed by five other members of Liverpool's Cabinet as well as forty junior members of the government. The Tory Party was now heavily split between the "High Tories" (or "Ultras," nicknamed after the contemporary party in France) and the moderates supporting Canning, often called "Canningites." As a result Canning found it difficult to form a government and chose to invite a number of Whigs to join his Cabinet, including Lord Lansdowne. The government agreed not to discuss the difficult question of parliamentary reform, which Canning opposed but the Whigs supported.

However Canning's health by this time was in steep decline. He died on August 8, 1827, in the very same room where Charles James Fox met his own end, 21 years earlier. To this day Canning's total period in office remains the shortest of any Prime Minister of the United Kingdom, 119 days. He is buried in Westminster Abbey.

Canning has come to be regarded as a "lost leader," with much speculation about what his legacy could have been had he lived. His government of Tories and Whigs continued for a few months under Lord Goderich but fell apart in early 1828. It was succeeded by a government under the Duke of Wellington, which initially included some Canningites but soon became mostly "High Tory" when many of the Canningites drifted over to the Whigs. Wellington's administration would soon go down in defeat as well. Some historians have seen the revival of the Tories from the 1830s onwards, in the form of the Conservative Party, as the overcoming of the divisions of 1827. What would have been the course of events had Canning lived is highly speculative. The Canningites were distinct within the Tory party because they favored Roman Catholic emancipation and freer trade.

To some later Conservatives, most prominently Benjamin Disraeli, Canning came to be regarded as a model and forerunner of One Nation Conservatism, providing a contrast to Sir Robert Peel, whom Disraeli attacked bitterly.