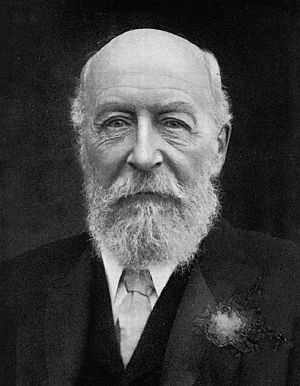 George Cadbury (September 19, 1839 – October 24, 1922), the third son of the Quaker tea and coffee dealer John Cadbury, was the co-founder of Cadbury's cocoa and chocolate company, a social reformer, a philanthropist, and a politician. George was born in Edgbaston, Birmingham, England, and was to remain an integral part of the Birmingham society throughout his life.

Although he was a successful businessman, he is best known for building decent housing for his employees and for establishing what has been described as a private social security program for their benefit. Through ownership of several newspapers, he promoted his ideas about welfare, which included improvement of working conditions and the then-innovative concept of an old age pension. Through charities and trusts established by them, the Cadbury family, led by George, is as well known for its philanthropy and humanitarianism as it is for its successful business. After World War I he left the Liberal Party, which he had represented as an elected member of the Birmingham City Council and Worcestershire County Council, and was a co-founder of an anti-war movement established in 1914, the Union of Democratic Control alongside, among others, Ramsay MacDonald, Britain's first Labor Prime Minister.

George Cadbury modeled responsible leadership that lives for the sake of others as he applied the principles of his Quaker faith in business, politics, and his personal life. He regularly taught once a week as a volunteer at the Birmingham Adult School, and through visiting his students' homes became personally aware of their often squalid living conditions. He and his wife, Elizabeth, both were leaders in philanthropy and raised two sons who carried on that tradition as adults. 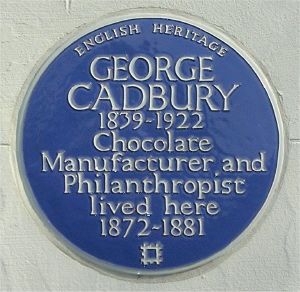 George Cadbury was born September 19, 1839 in Edgbaston, Birmingham, where his father John was a tea and coffee merchant. George was a pupil at the Quaker School. His family were committed members of the Society of Friends. George and his brother Richard took control of their father's business in 1861, since he was too ill to continue to manage it. George married Elizabeth Mary Taylor (1858-1951) in 1888. Elizabeth shared her husband's social agenda, serving on the Birmingham Education Committee and as an elected member of the Council (1919-25). Elizabeth held the Presidency of the National Council of Evangelical Free Churches in 1925 and was created a Dame of the British Empire in 1934. George and Elizabeth's sons, George Cadbury, Jr., Edward and John Lawrence Cadbury followed their parents as philanthropists, in public service as well as working in the family business.

When George and Richard took over, the business was failing. The two brothers introduced powdered cocoa to their customers, and the business began to make a profit. From an early age, George decided that he wanted to place the welfare of his workers before anything else, and invest in the community that enabled his company to succeed. He believed that if workers enjoyed a happy home life in attractive and sanitary surroundings, with a garden in which they could grow food, both they and the company would benefit from the esprit de corps that this would encourage. 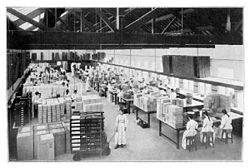 The packing room at Bournville, circa 1903.

In 1878 the brothers moved the factory from its then too-crowded site in Bridge Street in the City of Birmingham, purchasing 14 acres (57,000 m²) of land in open country, four miles (6 km) south of Birmingham, where they opened a new factory in 1879. In 1897 the Cadbury brothers started to produce chocolate. Called Cadbury's Dairy Milk, this lightly colored chocolate became the most popular in Britain, adding to the fame of the company. Over the following years more land was acquired and a model village, which became known as Bournville, designed by architect William Alexander Harvey, was built to provide low cost houses for the workers. For this, the Cadbury's purchased 120 acres next to the factory. Each house had its own garden and the village's design included open spaces, pioneering the Garden City idea, which aims to introduce the benefits of a rural environment into the urban context. Cadbury wanted one tenth of the estate "laid out and used as parks" [1]. Later, a hospital and a library and other community facilities were added. A Trust was established in 1900 to maintain the village, and ownership was invested in the Trustees. There were then 313 houses on the estate.

Cadbury Ltd. prospered because of humanitarian working conditions. In the Bournville factory, named after the local river and the French word for town, they produced chocolate from 1879. The brothers cared for their employees; they both believed in the social rights of the workers and hence they installed canteens and sport grounds. Nineteen years after Richard died, George opened a works committee for each gender which discussed proposals for improving the firm. He also pressed ahead with other ideas, like an annuity, a deposit account and education facilities for every employee. They introduced a half-day of work on Saturday, and days off on Public Holidays. Cadbury also donated the Lickey Hills Country Park to the people of Birmingham. 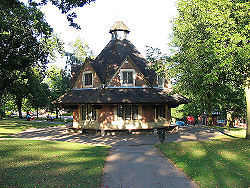 Bournville Rest House was built to celebrate the Silver Wedding Anniversary of George and Elizabeth Cadbury, and was paid for by the employees of Cadbury Brothers Ltd. The design is by William Alexander Harvey, who was architect of many of the buildings on the estate and is based on a medieval butter market in Dorset. Currently, the building houses the Visitors Center for the Carillon.

Cadbury also founded the Animal Friends Society, a "a forerunner of the Royal Society for the Prevention of Cruelty to Animals" [2]. Except for what went towards upkeep of his family, Cadbury gave all his money to charity.

George Cadbury was a pioneer of improving the working and living conditions of workers. He believed in the dignity and worth of all people. He also believed that happy families are essential to social cohesion. Birmingham, as an industrial city, grew during the nineteenth century into one of the most important economic centers in the United Kingdom, to become the second largest city. Nonconformity was strongly represented there and some of its leading politicians were practicing Christians who wanted to create a city, that, like the family and the state, would be created by divine will for the common good. George Dawson (1821-1876), a prominent Free Church minister in Birmingham, called this the "civic gospel". At the opening of the Birmingham Public Library in 1865, Dawson spoke of the city's God-given responsibility to "make provision for all our people". He said: "We are a Corporation, who have undertaken the highest duty that is possible to us; we have made provision for our people—for all our people—and we have made a provision of God's greatest and best gifts unto Man." [3]. As a member of the City Council, elected in 1877, Cadbury supported the reforms led by the Mayor, Joseph Chamberlain known as municipal socialism, which brought ownership of the gas supply, water, garbage disposal under municipal control and created a system of public parks. The Cadbury brothers formed Work Councils for their employees, one for men and one for women. Members were elected. The Councils discussed working conditions, education, health, safety, and also recreational activities. Every Sunday morning for 50 years George Cadbury taught at the Birmingham Adult School. A keen sportsman, George encouraged sport among his workers[4].

Cadbury was a devout Quaker throughout his life and saw, as did such fellow social reformers as Dawson, a link between his faith and his civic responsibilities. He saw all people as equal before God, which motivated much of his humanitarian and reform work. [5]. In 1903, Cadbury donated the former Cadbury family home to the Society of Friends as Woodbrooke Quaker Study Center. Woodbrooke was from the beginning open to people from any faith and focused on peace and reconciliation, spirituality and other areas of special interest to Quakers. Later, Woodbrooke became a constituent college of the Selly Oak federation, of which George's son, Edward Cadbury was a founding member, building the Selly Oak College Library.

Through the business that George and his brother established and the Village Trust they founded, the Cadbury brothers' legacy continues to enrich the lives of many people. Their heirs continued to establish charitable foundations—endowing a chair in Theology at Birmingham University, founding and supporting the Selly Oak Colleges, as well as supporting many other institutions. The George Cadbury Hall is named for him in the Selly Oak complex (now part of the University of Birmingham) where the George Cadbury Lectures are held. Edward Cadbury was instrumental in establishing the theology department at the University of Birmingham, where a family member served as Chancellor. Edward also donated Saint Francis Hall to the University, which houses the Chaplaincy. Charitable foundations include the Edward Cadbury Charitable Trust (founded by Edward, George's son) and the Barrow Cadbury Trust, established by Richard's son. George's grandson, Sir Adrian Cadbury, is recognized internationally as a leader in the field of reforming corporate governance.