Ellesmere Island is the largest of the Queen Elizabeth Islands in the Canadian Arctic Archipelago. Belonging to the Nunavut territory of Canada, Ellesmere is located off the northwest coast of Greenland. Its Cape Columbia is the most northerly point of land in Canada. The world's tenth largest island at 75,767 square miles (196,236 square km), it is Canada's third largest. The Arctic Cordillera mountain system covers much of Ellesmere Island, making it the most rugged island in the archipelago, with vast ice fields and deeply indented coastlines. Nunavut's highest point, Barbeau Peak, reaches an elevation of 8,583 feet (2,616 meters).

More than one-fifth of the island has been turned into a national park. Quttinirpaaq National Park, in Inuktitut language, means "top of the world." The physical geography of Ellesmere Island is stunning, with breathtaking scenery and enchanting wildlife. Due to the lack of industrialization, its Arctic air is among the clearest on Earth. Though much of the island is ice or snow covered, the vegetation of its snow-free areas supports herds of musk oxen, caribou, and polar bears, as well as the Arctic Hare and birds such as the majestic Artic Tern.

The population is concentrated in three small settlements (Eureka, Grise Ford [Aujuittuq], and Alert) and a weather station and military outpost—the northernmost community in North America. The combined population of these settlements is less than 200. However, there are those who venture here time and again, to conquer what is affectionately called the "Horizontal Himalayas." 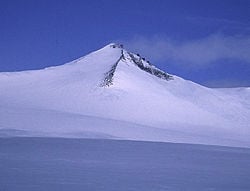 Barbeau Peak, named for Dr. Marius Barbeau, a Canadian anthropologist and characterized by deep and long crevasses, razor thin ridges and highly variable and volatile weather, is the highest mountain within the British Empire Range as well as the Arctic Cordillera.

The first inhabitants of Ellesmere Island were small bands of Inuit drawn to the area for Peary Caribou, muskox, and marine mammal hunting in approximately 1000-2000 B.C.E.[1]

As was the case for the Dorset (or Palaeoeskimo) hunters and the pioneering Neoeskimos, the Post-Ruin Island and Late-Thule-culture Inuit used the Bache Peninsula region extensively both summer and winter until environmental, ecological and possibly social circumstances caused the area to be abandoned. It was the last region in the Canadian High Arctic to be depopulated during the "Little Ice Age," attesting to its general economic importance as part of the Smith Sound culture sphere of which it was occasionally a part and sometimes the principal settlement component.[2]

Vikings, likely from the Greenland colonies, reached Ellesmere Island, Skraeling Island and Ruin Island during hunting and trading (with the Inuit groups) expeditions.[3] Unusual structures on Bache peninsula are believed to be the remains of a late-period Dorset stone longhouse.[4]

The first European to sight the island after the Little Ice Age was William Baffin, in 1616. It was named in 1852, by Edward Inglefield's expedition after Francis Egerton, 1st Earl of Ellesmere. The American expedition led by Adolphus Greely, in 1881, crossed the island from east to west. The Greely expedition found fossil forests on Ellesmere Island in the late 1880s. Stenkul Fiord was first explored in 1902, by Per Schei, a member of Otto Sverdrup's 2nd Norwegian Polar Expedition. 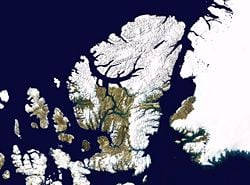 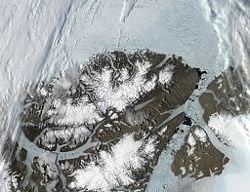 A satellite image of the northern segment of Ellesmere Island, Nunavut. Greenland is to the east.

The Ellesmere Island coastline is incised by fjords, with its northern coast extended by ice shelves. The landscape is spectacular, ruggedly jagged. The mountains of Grant Land on the Island's north is formed by a chain of sedimentary rocks some 100,000 years old, and shrouded in ice nearly 2,953 feet (900 m) thick. Rock spires break through this ice; the highest mountain in North America is on Ellesmere, Barbeau Peak, at 8,583 feet (2616 m).

While numerous species of birds and land mammals make the Island their home, sea ice discourages marine mammals. Though the climate is extreme, a peculiar "thermal oasis" at Lake Hazen produces surprisingly warm summers. Ellesmere is a true polar desert, with only 2.75 inches (70 mm) of precipitation annually in some places; consequently, vegetation is sparse.[6]

In July 2007, a study noted the disappearance of habitat for waterfowl, invertebrates, and algae on the Island. According to John P. Smol of Queen's University in Kingston, Ontario, and Marianne S. V. Douglas of the University of Alberta in Edmonton, warming conditions and evaporation have caused low water level changes in the chemistry of ponds and wetlands in the area. The researchers noted that, "In the 1980s, they often needed to wear hip waders to make their way to the ponds…while by 2006, the same areas were dry enough to burn.[7]

Large portions of Ellesmere Island are covered with glaciers and ice, with Manson Icefield and Sydkap in the south; Prince of Wales Icefield and Agassiz Ice Cap along the central-east side of the island, along with substantial ice cover in Northern Ellesmere Island. The northwest coast of Ellesmere was covered by a massive, 500 km (300 mi) long ice shelf until the twentieth century. The Ellesmere ice shelf reduced by 90 percent in the twentieth century due to global warming, leaving the separate Alfred Ernest, Ayles, Milne, Ward Hunt, and Markham Ice Shelves.[8] A 1986 survey of Canadian ice shelves found that 48 square kilometres (19 sq mi) (3.3 km³, 0.8 cu mi) of ice calved from the Milne and Ayles ice shelves between 1959 and 1974.[9] 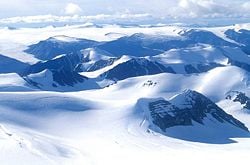 The Osborn Range of the Arctic Cordillera mountain system

The breakup of the Ellesmere ice shelves has continued in the twenty-first century: the Ward Ice Shelf experienced a major breakup during summer 2002;[12] the Ayles Ice Shelf calved entirely on August 13, 2005; the largest break off of the ice shelf in 25 years, it may pose a threat to the oil industry in the Beaufort Sea. The piece is 66 square kilometres (25 sq mi).[13] In April 2008, it was discovered that the Ward Hunt shelf was fractured into dozens of deep, multi-faceted cracks.[14] It seems likely the shelf is disintegrating.

Schei and, later, Nathorst[15] described the Paleocene-Eocene (ca. 55 Ma) fossil forest in the Stenkul Fiord sediments. The Stenkul Fjord site represents a series of deltaic swamp and floodplain forests.[16] The trees stood for at least 400 years. Individual stumps and stems of >1 m (>3 ft) diameter were abundant. There was an abundance of Metasequoia and possibly Glyptostrobus trees.

In 2006, University of Chicago paleontologist Neil H. Shubin reported the discovery of the fossil of a Paleozoic (ca. 375 Ma) fish, named Tiktaalik roseae, in the former stream beds of Ellesmere Island. The fossil exhibits many characteristics of fish, but also indicates a transitional creature that may be a predecessor of amphibians, reptiles, and dinosaurs.[17]

Ellesmere Island is noted as being the northernmost occurrence of eusocial insects; specifically, the bumblebee Bombus polaris. Interestingly, there is a second species of bumblebee occurring there, Bombus hyperboreus, which is a parasite in the nests of B. polaris. [18] 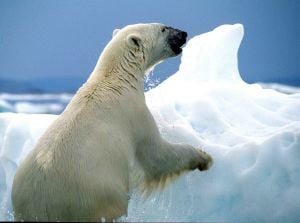 More than one-fifth of Ellesmere Island is protected as Quttinirpaaq National Park (formerly Ellesmere Island National Park), which includes seven fjords and a variety of glaciers, as well as Lake Hazen, North America's largest lake north of the Arctic Circle. Barbeau Peak, the highest mountain in Nunavut at 2,616 m (8,583 ft), is located in the Park's British Empire Range. The most northern mountain range in the world, the Challenger Mountains, is located in the northeast region, while the northern lobe of the island is called Grant Land.

The Park is located on the northeastern corner of Ellesmere Island. It is the second most northerly park on Earth after Northeast Greenland National Park. In Inuktitut language, Quttinirpaaq means "top of the world." It was established as Ellesmere Island National Park Reserve in 1988, and the name was changed to Quttinirpaaq in 1999,[19] when Nunavut territory was created, and became a national park in 2000.[20]

The land here is dominated by rock and ice. It is a polar desert with very little annual precipitation and many of the glaciers here are remnants from the last episode of glaciation. The reserve covers nearly 14,672 square mile (38,000 sq km), making it the second largest park in Canada (after Wood Buffalo National Park). Some wildlife, including Arctic Hare, Peary Caribou, and Muskoxen live in the park, but sparse vegetation and low temperatures support only small populations. Plant and animal life is heavily concentrated in the Lake Hazen region, which due to its sheltered location has a milder climate than the surrounding plateaus.

Much of the highlands of the reserve accumulate snow that typically does not melt in the summer, but instead compacts into ice and flows down glaciers and into the Arctic Ocean. In many instances, this occurs in the form of land-based glaciers, which terminate before reaching water, with ice melting into lakes or streams as it drains away. Glaciologists can monitor these glaciers for signs that their ends (termini) are retreating, a possible indicator of regional climate warming. In other instances, the glaciers reach the sea and flow out over the water, breaking apart as icebergs. Such glaciers are known as tidewater glaciers. In these glaciers, the terminus can retreat suddenly and may not reflect short-term regional climate change. Their movement is driven by complex processes related to the thickness of the ice and the depth of the water.

Parks Canada, which is responsible for the area, operates the Tanquary Fiord Airport, which is one of the main access points for tourists who visit the area.

The volcanics of the Maskell Inlet Assemblage are mostly made up of tuffs, with smaller flows. Compositionally these are mostly andesite or undifferentiated andesite/basalt. The volcanics on Ellesmere Island has been uncertainly associated to both the early volcanic activity of the Iceland hotspot and the Alpha Ridge. The Ellesmere Island Volcanics are part of the High Arctic Large Igneous Province.

In 2001, the population of Ellesmere Island was recorded as 168. There are three settlements on Ellesmere Island including Alert, Eureka, and Grise Fiord. Politically, it is part of the Qikiqtaaluk Region.

Canadian Forces Station (CFS) Alert is the northernmost settlement in the world. With the end of the Cold War and the advent of new technologies allowing for remote interpretation of data, the overwintering population has been reduced to 50.

Eureka, which is the second northernmost settlement in the world, consists of three areas, the "airport" which includes "Fort Eureka" (the quarters for military personnel maintaining the island's communications equipment), the Environment Canada Weather Station and the Polar Environmental Atmospheric Research Laboratory (PEARL), formally the Arctic Stratospheric Ozone (AStrO) Observatory.