David Daniel Kaminsky, known as Danny Kaye (January 18, 1913 – March 3, 1987), was a Golden Globe-winning American actor, singer, and comedian. In many of his movies, as well as on stage, Kaye proved to be an able actor, singer, dancer, and comedian, often having his comedic talents showcased by special material written by his wife, Sylvia Fine. He showed quite a different and serious side as Ambassador for UNICEF, and in one of his few dramatic roles in the memorable TV-movie Skokie, in which he played a Holocaust survivor. Before he died in 1987, Kaye also demonstrated his ability to conduct an orchestra during a comical, but technically sound, series of concerts organized for UNICEF fundraising. Kaye received two Academy Awards, an honorary award in 1955 and the Jean Hersholt Humanitarian Award in 1982.

Born in Brooklyn to Jewish immigrants from the Ukraine, Kaye became one of the world's best-known comedians. Kaye spent his early youth attending PS 149 in East New York, Brooklyn. He continued on to Thomas Jefferson High School, although he never graduated. He learned his trade in his teen years in the Catskills as a tummler in the Borscht Belt.

Danny Kaye made his film debut in a 1935 comedy short subject, entitled Moon Over Manhattan. In 1937, he signed with New York-based Educational Pictures for a series of two-reel comedies. Kaye usually played a manic, dark-haired, fast-talking Russian in these low-budget shorts, opposite young hopefuls June Allyson or Imogene Coca. The Kaye series ended abruptly when the studio shut down permanently in 1938.

Kaye scored a personal triumph in 1941, in the hit Broadway comedy Lady in the Dark. His show-stopping number was "Tchaikovsky," by Kurt Weill and Ira Gershwin, in which he sang the names of a whole string of Russian composers at breakneck speed, seemingly without taking a breath.

His feature film debut was in producer Samuel Goldwyn's Technicolor comedy Up in Arms (1944), a wartime remake of Goldwyn's Eddie Cantor comedy Whoopee! Goldwyn agonized over Kaye's ethnic, Borscht-belt looks and ordered him to undergo a nose job. Kaye refused, and Goldwyn found another way to brighten Kaye's dark features: He had Kaye's hair lightened, giving him his trademark redheaded locks. Kaye's rubber face and fast patter were an instant hit, and rival producer Robert M. Savini cashed in almost immediately by compiling three of Kaye's old Educational shorts into a makeshift feature, The Birth of a Star (1945).

Kaye starred in several movies with actress Virginia Mayo in the 1940s, and is well known for his roles in films such as The Secret Life of Walter Mitty (1947), The Inspector General (1949), On the Riviera (1951) co-starring Gene Tierney, White Christmas (1954, in a role originally intended for Donald O'Connor), Knock on Wood (1954), The Court Jester (1956), and Merry Andrew (1958). Kaye starred in two pictures based on biographies, Hans Christian Andersen (1952) about the Danish story-teller, and The Five Pennies (1959) about jazz pioneer Red Nichols. His wife, Sylvia Fine, wrote many of the witty, tongue-twisting songs for which Danny Kaye became famous. Some of Kaye's films included the theme of doubles, two people who look identical (both played by Danny Kaye) being mistaken for each other, to comic effect.

According to a series of memos released by the Federal Bureau of Investigation under the Freedom of Information Act, the FBI investigated a rumor that Kaye dodged the draft during World War II. Allegedly, Kaye faked a medical condition in order to gain 4-F status and exemption from military service. However, these accusations were never proven, and though the FBI maintained a file on Kaye's connections to supposed Communist groups, he was never prosecuted.[1]

Kaye starred in a radio program of his own, The Danny Kaye Show, on CBS in 1945-1946. Despite its clever writing (by radio legend Goodman Ace, Sylvia Fine, and respected playwright-director Abe Burrows) and performing cast (including Eve Arden, Lionel Stander, and big bandleader Harry James), the show lasted only a year.

Kaye was sufficiently popular that he inspired imitations:

According to The New York Times, when he appeared at the London Palladium music hall in 1948, he "roused the Royal family to shrieks of laughter and was the first of many performers who have turned English variety into an American preserve." Life magazine described his reception as "worshipful hysteria" and noted that the royal family, for the first time in history, left the royal box to see the show from the front row of the orchestra.

He hosted the Academy Awards in 1952.[2] The program was broadcast only on radio. Telecasts of the Oscar ceremony would come later.

He hosted his own variety hour on CBS television, The Danny Kaye Show, from 1963 to 1967. During this period, beginning in 1964, he also acted as television host to the annual CBS telecasts of MGM's The Wizard of Oz. Kaye also did a stint as one of the What's My Line? Mystery Guests on the popular Sunday Night CBS-TV program. Later, Kaye also served as a guest panelist on that quiz show. Years later, Kaye guest-starred in episodes of The Muppet Show, The Cosby Show, and the 1980s remake of The Twilight Zone.

Kaye's influence was felt beyond the entertainment world, into the world of professional sports as well. Kaye was the original owner of the Seattle Mariners, along with his partner Lester Smith, from 1977-81. Prior to that, the lifelong fan of the Brooklyn/Los Angeles Dodgers recorded a song called "The D-O-D-G-E-R-S Song (Oh really? No, O'Malley!)," describing a fictitious encounter with the San Francisco Giants, which was a hit during those clubs' real-life pennant chase of 1962. That song is included on one of the Baseball's Greatest Hits CD's.

During the 1950s, Kaye also acted in a pantomime production of Cinderella, in Sydney, Australia, where he played the role of Buttons, Cinderella's stepfather's servant, and also Cinderella's friend. In the 1970s, Kaye injured his leg during the run of the Richard Rodgers musical Two by Two, but went on with the show, cavorting on stage from a wheelchair.

In 1980, Kaye hosted and sang in the 25th Anniversary of Disneyland celebration, and hosted the opening celebration for Epcot Center in 1982, both of which were aired on prime-time American television.

In his later years, he took to entertaining at home as chef—he had a special stove installed in his patio—and host. He specialized in Chinese cooking. The library at the Culinary Institute of America in Hyde Park, New York, is named for him.

He also had a longstanding interest in medicine, and was permitted to observe surgery on several occasions.[3] 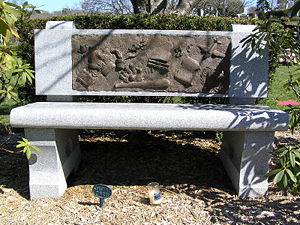 The bench at Danny Kaye's grave in Kensico Cemetery

Kaye died in 1987, from a heart attack, following a bout of hepatitis. He left a widow, Sylvia Fine, and a daughter, Dena. He is interred in the Kensico Cemetery in Valhalla, New York. His grave is adorned with a bench that contains friezes of a baseball and bat, an aircraft, a piano, a flower pot, musical notes, and a glove.

Throughout his life, Kaye donated to various charities.

He acted as the first International Ambassador for UNICEF. Working alongside UNICEF's Halloween fundraiser founder, Ward Simon Kimball Jr., Mr. Kaye educated the public on impoverished children in deplorable living conditions overseas and assisted in the distribution of donated goods and funds.

Kaye was enamored by music. While he often claimed an inability to read music, he was quite the conductor. Kaye was often invited to conduct symphonies as charity fundraisers. Over the course of his career, he raised over $5,000,000 in support of musicians pension funds.[4]