During the Viking period, between the eighth and eleventh centuries, Danes were involved in exploring and settling as far West as Newfoundland. They also held sway over parts of Britain (known as Danelaw and levied the Danegeld tribute from the Anglo-Saxon kings until the eleventh century. They also had settlements in Ireland, France, and Normandy and traded as far away as Constantinople. At the beginning of the thirteenth century, Denmark obtained possessions in Estonia. In personal union with Norway, Denmark-Norway also had possession of old Norwegian holdings, Greenland, the Faroe Islands, Orkney, Shetland, and Iceland. In the seventeenth century, following territorial losses on the Scandinavian Peninsula, Denmark-Norway began to develop colonies, forts, and trading posts in Africa, the Caribbean, and India. Christian IV first initiated the policy of expanding Denmark's overseas trade, as part of the mercantilist wave that was sweeping Europe. Denmark's first colony was established at Tranquebar, or Trankebar, on India's southcoast in 1620. Admiral Ove Gjedde led the expedition that established the colony.

The only remaining vestige of this empire, and its only substantial territory ever, is that of Greenland, whose colonial status ceased in 1953, and is now an autonomous region of the Danish state. The Faroe Islands have had autonomy within Denmark since 1948. Denmark’s overseas possessions were acquired in the main peacefully via treaties, purchase and trade concessions. Denmark did not become embroiled in the wider imperial contest between European powers, or in the Scramble for Africa. 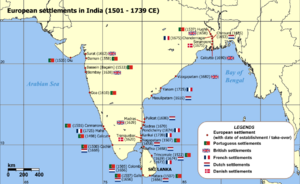 Danish and other European settlements in India.

Denmark maintained a scattering of small colonies and trading posts throughout the Indian sub-continent (but not Ceylon/Sri Lanka) from the seventeenth to nineteenth centuries, after which most were sold or ceded to Britain which had become the dominant power there. The Danish East India Company was established in 1616 to rival the British and Dutch companies, but was not as successful. By 1779, the Danish colonies were under direct rule from Copenhagen. The Dane’s had hoped to acquire Sri Lanka but did not succeed.

The colony at Tranquebar on India’s South Eastern coast was kept for over 200 years, with a few interruptions, until it was sold to the British in 1845. Trankebar was never an enormously profitable venture, but it was still something of a success. 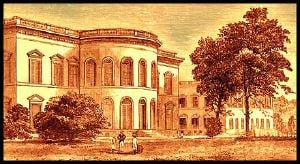 Old Serampore College, chartered by the King of Denmark in 1827 founded by the British Baptist missionary, William Carey.

In 1755, Denmark acquired the village of Serampore (Frederiksnagore), and later the towns of Achne and Pirapur. They are located about 25 kilometres north of Calcutta. In 1829, a Danish university was established at Serampore, which still exists today. It was here that the first British Baptist missionaries settled at a time when missionary activity was still banned in British East India Company territory. They established Serampore College in 1818, which received its Royal Charter from the King of Denmark in 1827. It remains the only College in India authorized to grant degrees in Christian theology, and validates many other institutions in India.

These towns were also sold to Britain in 1845. Other imperial ventures include colonization attempts of Dansborg and the Nicobar Islands, called Frederik Øerne ("Frederik Islands") by the Danes.

Denmark acquired the island of St. Thomas in 1671, St. Jan (today St. John) in 1718, and bought St. Croix from France in 1733. All of the islands' economies were based primarily on sugar. These islands were known as the Danish West Indies and were eventually sold to the United States in 1917 for $25 million. The Danes had wanted to get rid of the islands for some decades as the economies of the islands had been declining since Denmark abolished slavery, on which the profitability of the sugar industry depended. The United States hoped to use them as naval bases. Since 1917, the islands have been known as the U.S. Virgin Islands.

Denmark maintained a number of trading stations and four forts on the Gold Coast in west Africa, especially around modern day Ghana. The three trading stations were Fort Frederiksborg (Kpompo), Fort Christiansborg, (by Accra in 1661) that was purchased from Sweden, and Frederiksberg. The forts were Fort Prinsensten built in 1784, Fort Augustaborg from 1787, Fort Friedensborg and Fort Kongensten, several of which are ruins today. Of these, only one is still used today, Fort Christiansborg, which is the Ghanaian president's residence in Ghana. Plantations were established by Frederiksborg, but they failed. Fort Christiansborg became the base for Danish power in west Africa, and the center for slave trade to the Danish West Indies. In 1807, Denmark's African business partners were suppressed by the Ashanti, which led the abandonment of all trading stations. Denmark sold its forts to Great Britain in 1850.

King Fredeick IV of Denmark was interested in the "well-being of his Indian subjects" which for him meant helping to spread Christianity. He established the Royal Dabish Misison, which was pioneered by Bartholpmew Ziegenbalg, who reached india in 1706. He advocated that the preaching of "the gospel must be based on an accurate knowledge of the mind of the people" and himself "made a careful study of the actual religious beliefs of the people of South India."[1] Although the Danish Mission itself confined its work to Danish terrirory. Danish missionaries also worked elswhere, often supported by other agencies. The Mission at Tranquebar included medical doctors who were not, however, expected to evangelize.[2] Later, Christian misisonaries would be criticized for offering their humanitarian services only in order to entice people to become Christian and not as an expression of unconditional love.

Denmark can be considered a European colonial power, although it did not acquire as large a territory as did such nations as Holland, France, Portugal, Spain, or the British. It does not have a reputation in the developing world as a former oppressor but is regarded as a generous donor, although Danish controlled territory was not treated especially better than that governed by other powers. Being smaller there may have been less manipulation and oppression, less need to divide and rule. Slavery was practiced in its West Indies colony. It prohibited the slave trade but not slavery in 1792; that followed in 1848. Denmark emerged from its colonial experience with one of the highest standards of living in Europe, and with a comparatively liberal attitude towards immigration. Denmark has a well developed social welfare system and as a nation is committed to development and to the protection of the environment. Denmark’s colonial legacy can be said to have opened the eyes of a comparatively small nation on the rest of the world, although exactly why it seems to see the world as a venue for benevolent acts rather than as a sphere for the projection of its own self-interests is an interesting question. Its empire was a trading enterprise, less designed to feed industry at home than were some other imperial projects. Although Denmark became an industrialized nation during its colonial days, it did not need the same huge amounts of raw materials to fuel its factories that Britain and France did and agriculture is still an important component of its economy. Perhaps the type of trade conducted during the colonial period by Denmark was generally of a more mutually beneficial nature, which led to greater respect for the cultural other, who, consequently were less despised than they were in the colonies of some other European powers.

Retrieved from https://www.newworldencyclopedia.org/p/index.php?title=Danish_Empire&oldid=1071185
Categories:
Hidden category:
This page was last edited on 24 June 2022, at 00:31.
Content is available under Creative Commons Attribution/Share-Alike License; additional terms may apply. See Terms of Use for details.