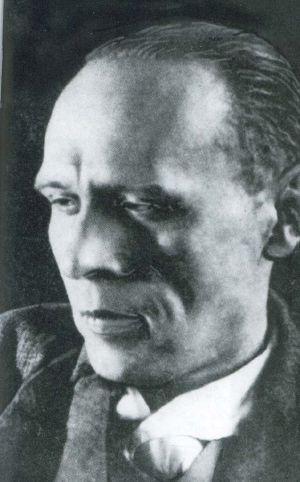 Kharms founded the avant-garde collective OBERIU, or Union of Real Art. Inspired by Russian Futurism, especially the works of Khlebnikov and Kazimir Malevich, he created an aesthetic based on the notion of the autonomy of art. Like modern art, modern literature began to experiment with the artistic medium, language. Khlebnikov was an early pioneer in Russia, but Kharms quickly embraced this new style.

Like most of the modernists, Kharms saw the Russian Revolutions in 1905 and 1917, as part of creating a new society that was part of the same revolutionary movement that was taking place in the arts. However, the revolution would soon turn into a new orthodoxy, Stalinism. The artistic expression of that orthodoxy was Socialist realism, which would silence a generation of writers, including Kharms. The political expression was the Great Purges, which would cost Kharms his life.

Daniil Ivanovich Yuvachev (Даниил Иванович Ювачёв) was born in St. Petersburg, into the family of Ivan Yuvachev, a well known member of the revolutionary group, Narodnaya Volya or The People's Will. By the time Daniil was born, the elder Yuvachev had already been imprisoned for his involvement in subversive acts against the tsar and had become a religious philosopher, as well as an acquaintance of Anton Chekhov who accompanied the author during his trip to Sakhalin.

Daniil invented the pseudonym Kharms while attending high school at the prestigious German Peterschule, the school set up by Tsar Peter the Great for the children of German artisans brought to St. Petersburg as part of Peter's campaign to build a "window to the west." It was likely influenced by his fascination with Arthur Conan Doyle's Sherlock Holmes. While at the Peterschule, he learned the rudiments of both English and German, and it may have been the English "harm" and "charm" that he incorporated into "Kharms." Throughout his career Kharms used variations on his name and the pseudonyms DanDan, Khorms, Charms, Shardam, and Kharms-Shardam, among others. It is rumored that he scribbled the name Kharms directly into his passport.

In 1924, he entered the Leningrad Electrotechnicum, from which he was expelled for "lack of activity in social activities." After his expulsion, he gave himself over entirely to literature. He joined the circle of Tufanov, a sound-poet, and follower of Velemir Khlebnikov's ideas of "zaum" (or "trans-sense") poetry. He met the young poet Alexander Vvedensky at this time, and the two became close friends and inseparable collaborators.

In 1927, the Association of Writers of Children's Literature was formed, and Kharms was invited to be a member. From 1928 until 1941, Kharms continually produced children's works and had a great success.

In 1928, Daniil Kharms founded the avant-garde collective OBERIU, or Union of Real Art. He embraced the new movements of Russian Futurism laid out by his idols, Khlebnikov, Kazimir Malevich, and Igor Terentiev, among others. Their ideas served as a springboard. His aesthetic centered around a belief in the autonomy of art from real world rules and logic, and the intrinsic meaning to be found in objects and words outside of their practical function.

By the late 1920s, his antirational verse, nonlinear theatrical performances, and public displays of decadent and illogical behavior earned Kharms—who always dressed like an English dandy with a calabash pipe—the reputation of being a talented but highly eccentric “fool” or “crazy-man” in Leningrad cultural circles.

Even then, in the late 20s, despite rising criticism of the OBERIU performances and diatribes against the avant-garde in the press, Kharms nurtured a fantasy of uniting the progressive artists and writers of the time (Malevich, Filonov, Terentiev, Vladimir Mayakovsky, Kaverin, Zamyatin) with leading Russian Formalist critics (such as Yury Tynyanov, Victor Shklovsky, Boris Eikhenbaum, and Lydia Ginzburg) and a younger generation of writers (all from the OBERIU group–Alexander Vvedensky, Konstantin Vaginov, Nikolai Zabolotsky, Igor Bakhterev), to form a cohesive cultural movement of Left Art. Political circumstances did not allow Kharms to realize his dreams.

Kharms was arrested in 1931 together with Vvedensky, Tufanov and some other writers, and was in exile from his hometown (forced to live in the city of Kursk) for most of a year. He was arrested as a member of "a group of anti-Soviet children's writers," and some of his works were used as an evidence. Soviet authorities, having become increasingly hostile toward the avant-garde in general, deemed Kharms’ writing for children anti-Soviet because of its absurd logic and its refusal to instill materialist and Soviet social values.

He continued to write for children's magazines when he returned from exile, though his name would appear in the credits less often. His plans for more performances and plays were curtailed, the OBERIU disbanded, and Kharms receded into a very private life, writing only for the desk drawer, for his wife, Marina Malich, and for a small group of friends, the “Chinari,” who met privately to discuss matters of philosophy, music, mathematics, and literature.

In the 1930s, as the mainstream Soviet literature was becoming more and more conservative under the guidelines of Socialist Realism, Kharms found refuge in children's literature. (He had worked under Marshak at DetGIz, the state-owned children's publishing house since the mid-1920s, writing new material and translating children literature from the west, including Wilhelm Busch's Max and Moritz). Many of his poems and short stories for children, published in the Chizh (Чиж), Yozh (Еж), Sverchok (Сверчок), and Oktyabryata (Октябрята) magazines, are considered classics of the genre and his roughly twenty children's books are well known and loved by kids to this day—all despite his personal deep disgust for children, unknown to the public at that time. His "adult" writing was not published during his lifetime with the sole exceptions of two early poems. Still, these were lean times and his honorariums did not quite pay the bills, plus the editors in the children's publishing sector were suffering under extreme pressure and censorship and some were disposed of during Stalin's Great Purge.

Thus, Kharms lived in debt and hunger for several years until his final arrest on suspicion of treason in the summer of 1941 (as most people with a previous arrest were being picked up by the NKVD in those times). He was imprisoned in the psychiatric ward at Leningrad Prison No. 1. and died in his cell in February, 1942—most likely from starvation, as the Nazi blockade of Leningrad had already begun. His work was saved from the war by loyal friends and hidden until the 1960s, when his children’s writing became widely published and scholars began the job of recovering his manuscripts and publishing them in the west and in samizdat.

Kharms' stories are typically brief vignettes (see also short prose and feuilleton) often only a few paragraphs long, in which scenes of poverty and deprivation alternate with fantastic, dreamlike occurrences and acerbic comedy. Occasionally they incorporate incongruous appearances by famous authors (for example, Pushkin and Gogol tripping over each other; Count Leo Tolstoy showing his chamber pot to the world; Pushkin and his sons falling off their chairs, and so on).

The poet often professed his extreme abhorrence of children and pets, as well as old people; his career as a children's writer notwithstanding.

Kharms' world is unpredictable and disordered; characters repeat the same actions many times in succession or otherwise behave irrationally; linear stories start to develop but are interrupted in midstream by inexplicable catastrophes that send them in completely different directions.

His manuscripts were preserved by his sister and, most notably, by his friend Yakov Druskin, a notable music theorist and amateur theologist and philosopher, who dragged a suitcase full of Kharms's and Vvedensky's writings out of Kharms's apartment during the blockade of Leningrad and kept it hidden throughout difficult times.

Kharms' adult works were picked up by Russian samizdat starting around the 1960s, and thereby did have an influence on the growing "unofficial" arts scene. (Moscow Conceptualist artists and writers such as Kabakov, Prigov, Rubinstein, were influenced by this newly found avant-garde predecessor).

As for English translations—oddly, many have appeared of late in American literary journals. In the 1970s, George Gibbian at Cornell published the first English collection of OBERIU writing, which included stories and a play by Daniil Kharms and one play by Alexander Vvedensky. In the early 1990s, a slim selected volume translated into British English by Neil Cornwell came out in England. New translations of all the members of the OBERIU group (and their closely knit group of friends, the Chinari) appeared in Summer, 2006 in the U.S. ("OBERIU: An Anthology of Russian Absurdism," containing poetry, drama and prose by Alexander Vvedensky, Daniil Kharms, Nikolai Zabolotsky, Nikolai Oleinikov, Leonid Lipavsky, and Yakov Druskin, edited Eugene Ostashevsky and translated by Matvei Yankelevich, Thomas Epstein, Genya Turovskaya, Eugene Ostashevsky, and Ilya Bernstein), including not only prose, but plays, poetry, and philosophical tracts and treatises, with an introduction by Eugene Ostashevsky (not Susan Sontag, who is on some websites advertised as the author of the foreword).

His reputation in the twentieth century in Russia was largely based on his widely beloved work for children. His other writings (a vast assortment of stories, miniatures, plays, poems, and pseudo-scientific, philosophical investigations) were virtually unknown until 1970's, and not published officially in Russia until "glasnost". Beginning in the 1970s, many of Kharms' children's texts were set to music, and were often heard on the radio.

Among those influenced by Kharms' work include:

Retrieved from https://www.newworldencyclopedia.org/p/index.php?title=Daniil_Kharms&oldid=1071184
Categories:
Hidden category:
This page was last edited on 24 June 2022, at 00:30.
Content is available under Creative Commons Attribution/Share-Alike License; additional terms may apply. See Terms of Use for details.