Samizdat (Russian: самиздат, Polish: Bibuła, Bulgarian: самиздат) was the clandestine copying and distribution of government-suppressed literature or other media in Soviet-bloc countries. Translated the word самиздат means self-published. Copies were made a few at a time, and those who received a copy would be expected to make more copies. This was often done by handwriting or typing. This grassroots practice to evade officially imposed censorship was fraught with danger as harsh punishments were meted out to people caught possessing or copying censored materials. It began with poetry, but extended to include political dissent and all forms of culture that were not officially sanctioned. Samizdat demonstrates the human committment both to freedom and to truth, in the face of repressive regimes. The peoples under Soviet domination rejected the official version of reality and risked their lives to communicate the truth as they understood it.

Vladimir Bukovsky defined it, tongue-in-cheek, as follows: "I myself create it, edit it, censor it, publish it, distribute it, and [may] get imprisoned for it."[1]

Essentially, the samizdat copies of texts, such as Mikhail Bulgakov's novel The Master and Margarita, were passed among friends. The techniques to reproduce the forbidden literature and periodicals varied from making several copies of the content using carbon paper, either by hand or on a typewriter, to printing the books on semi-professional printing presses in larger quantities. Before glasnost, the practice was dangerous, since copy machines, printing presses and even typewriters in offices were under control of the First Departments (KGB outposts in every major enterprise): for all of them reference printouts were stored for identification purposes.

Etymologically, the word "samizdat" is made up of "sam" (Russian: сам, "self, by oneself") and "izdat" (Russian: издат, shortened "издательство," izdatel'stvo, "publisher"), thus, self-published.

The term was coined as a pun by the Russian poet, Nikolai Glazkov, in the 1940s based on an analogy with the names of Soviet official publishing houses, such as Politizdat (short for Politicheskoe izdatel'stvo, Russian: Политиздат [2]), Detizdat (literature for children), etc.

The term became very popular, spawning related terms such as: Magnitizdat which refers to the passing on of taped sound recordings (magnit- referring to magnetic tape), often of "underground" music groups, bards or lectures.

In Poland, the usual term in the later years of Communism was drugi obieg or "second circulation" (of publications), the "first circulation" implying legal and censored publications. The term bibuła ("blotting-paper") is more time-honored, having been used even in Tsarist times.

In the Soviet Union

Self-published and self-distributed literature has a long history, but samizdat is a unique phenomenon in the post-Stalin Soviet Union and other countries that were under Soviet domination. Under the grip of censorship of police state, these societies used underground literature for self-analysis and self-expression. [3]

At the outset of the Khrushchev Thaw in the mid-1950s, poetry became very popular and writings of a wide variety of known, prohibited, repressed, as well as young and unknown poets circulated among Soviet intelligentsia.

On June 29, 1958, a monument to Vladimir Mayakovsky was opened in the center of Moscow. The official ceremony ended with impromptu public poetry readings. The Moscovites liked the atmosphere of relatively free speech so much that the readings became regular and came to be known as "Mayak" (Russian: Маяк, the lighthouse, but also a play of Mayakovsky's last name), with students as a majority of participants. However, it did not last long as the authorities began cracking down on the meetings. In the summer of 1961, several meeting regulars (among them Eduard Kuznetsov) were arrested and charged with "anti-Soviet agitation and propaganda" (Article 70 of the RSFSR Penal Code, a catch-all charge that allowed the state to arrest virtually anyone it deemed a problem). The editor and publisher of the Moscow samizdat magazine "Синтаксис" (Syntaxis) Alexander Ginzburg was arrested in 1960.

Even some legitimate publications, such as a novel One Day in the Life of Ivan Denisovich by Alexander Solzhenitsyn (winner of the Nobel Prize in Literature in 1970), had been published in the state-controlled media. It was first published in literary magazine Novy Mir in November 1962, but were practically impossible to find in (and later taken out from) circulation and made their way into samizdat.

Not everything published in samizdat had political overtones, as in the case of the poetry of Joseph Brodsky. Nonetheless, in 1963, Brodsky (who would become a Nobel laureate in 1987) was charged with "social parasitism" and convicted for being nothing but a poet. In the mid-1960s, an underground literary group СМОГ ("Самое Молодое Общество Гениев," Samoye Molodoye Obshchestvo Geniyev, translated as The Youngest Society of Geniuses) issued their literary almanac "Сфинксы" (Sfinksy; The Sphinxes), collections of prose and poetry. Some of their writings were close to the Russian avant-garde literature of the 1910s–1920s.

The infamous 1965 show trial of writers Yuli Daniel and Andrei Sinyavsky (also charged with violating Article 70) and increased repressions marked the demise of "the Thaw" and harsher times for samizdat. Some of the samizdat content became more politicized and played an important role in the dissident movement in the Soviet Union.

From 1964 to 1970, historian Roy Medvedev regularly published analytical materials that later appeared in the West under the title "Политический дневник" (Politicheskiy Dnevnik; The Political Journal).

One of the longest-running and well-known samizdat publications was the information bulletin "Хроника текущих событий" (Khronika Tekushchikh Sobitiy; Chronicle of Current Events)[4], dedicated to the defense of human rights in the USSR. For 15 years from 1968 to 1983, a total of 63 issues were published. The anonymous authors encouraged the readers to utilize the same distribution channels in order to send feedback and local information to be published in the subsequent issues. The Chronicle was known for its dry concise style; its regular rubrics were titled "Arrests, Searches, Interrogations," "Out of Court Repressions," "In Prisons and Gulag (Camps)," "News of Samizdat," "Persecution of Religion," "Persecution of Crimean Tatars," "Repressions in Ukraine," "Lithuanian Events," etc. The authors maintained that according to the Soviet Constitution, the Chronicle was not an illegal publication, but the long list of people arrested in relation to it included leading dissidents, such as Natalya Gorbanevskaya, Yuri Shikhanovich, Pyotr Yakir, Victor Krasin, Sergei Kovalev, Alexander Lavut, and Tatyana Velikanova, among others.

Another notable and long-running (about 20 issues in the period of 1972-1980) publication was refusenik political and literary magazine "Евреи в СССР" (Yevrei v SSSR, Jews in the USSR), founded and edited by Alexander Voronel and after his release, by Mark Azbel and Alexander Luntz.

With increased proliferation of computer technologies, it became practically impossible for the government to control the copying and distribution of samizdat.

After Ayatollah Ruhollah Khomeini was exiled by the Shah of Iran in 1964, his sermons were smuggled into Iran on cassette tapes and widely copied, increasing his popularity and leading, in part, to the Iranian Revolution. 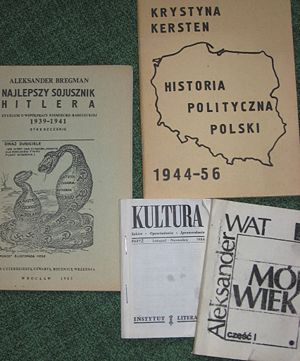 In the nineteenth century in partitioned Poland, many underground newspapers existed; among the most prominet was Robotnik (1894-1939), published in over 1,000 copies from 1894.

In the People's Republic of Poland during the 1970s and 1980s, several books (sometimes as long as 500 pages) were printed in quantities often exceeding 5,000 copies. Newspapers were also published. For example, in 1980, a news-sheet, Solidarnosc, reached a print run of 30,000 copies daily [5] and some of the largest runs reached over 100,000 copies.

Most of the Polish underground press was organized in the 1970s by the Movement for Defense of Human and Civic Rights (ROBCiO) and Workers' Defense Committee (KOR). Over several years, alongside hundreds of small individual publishers, several large underground publishing houses were created, fueled by supplies smuggled from abroad or stolen from official publishing houses.

The Polish underground press successfully drew on experiences of Second World War veterans of Armia Krajowa and much attention was paid to conspiracy; however, after martial law in Poland and the government crackdown on Solidarity, the activities of underground publishing were significantly curtailed for several years following. However, with the communist government losing power in the second half of the 1980s, production of Polish samizdat (in Poland known as bibuła) dramatically increased and many publications were distributed throughout the entire country. After the Autumn of Nations in 1989 some of the underground publishers transformed into regular and legal publishing houses.

There were important differences of scale between Polish underground publishing and the samizdats of the Soviet Union, Hungary, Czechoslovakia, and other Soviet-sphere countries. In the 1980s, at any time there were around one hundred of independent publishers in Poland that formed an extremely interesting institution of an underground market. Books were sold through underground distribution channels to paying customers, including the top communist leaders. Among a few hundred periodicals, the Tygodnik Mazowsze weekly reached an average circulation of 20,000, occasionally printing up to 50,000 copies. The estimated production of books and thick journals can be put close to one thousand per year and more than one million copies. Other products on this market included cassettes, videocassettes, postcards, stamps, and calendars.

Retrieved from https://www.newworldencyclopedia.org/p/index.php?title=Samizdat&oldid=1092610
Categories:
Hidden category:
This page was last edited on 23 December 2022, at 02:12.
Content is available under Creative Commons Attribution/Share-Alike License; additional terms may apply. See Terms of Use for details.