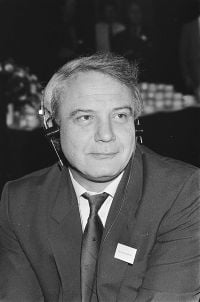 Vladimir Bukovsky in May, 1987

He was one of the first to expose the use of psychiatric imprisonment against political prisoners in the Soviet Union. He spent a total of 12 years in Soviet prisons, labor camps and in "psikhushkas," forced-treatment psychiatric hospitals used by the regime as special prisons. In his later years, he warned of the increased authoritarianism in Russia, and unsuccessfully attempted to register as a candidate for president in the 2008 election.

Vladimir Bukovsky was born in the town of Belebey, Bashkirian ASSR, Russian SFSR (now Bashkortostan), where his family was evacuated from Moscow during World War II.

In 1959, he was expelled from his Moscow school for creating and editing an unauthorized magazine.

From June 1963 to February 1965, Bukovsky was convicted under Article 70-1 of the Penal Code of the RSFSR and sent to a psikhushka for organizing poetry meetings in the center of Moscow (next to the Mayakovsky monument). The official charge was an attempt to copy anti-Soviet literature, namely The New Class by Milovan Djilas.

In December 1965, he organized a demonstration at Pushkin Square in Moscow in defense of the writers Andrei Sinyavsky and Yuli Daniel (see Sinyavsky-Daniel trial). Three days before the planned demonstration, Bukovsky was arrested. He was kept in various psykhushkas without charges until July 1966.

In January 1967, he was arrested for organizing a demonstration in defense of Alexander Ginzburg, Yuri Galanskov, and other dissidents (the charge was violation of Article 190-1, which carried three years of imprisonment); he was released in January 1970.

In 1971, Bukovsky managed to smuggle to the West over 150 pages documenting abuse of psychiatric institutions for political reasons in the Soviet Union. The information galvanized human rights activists worldwide (including inside the country) and was a pretext for his subsequent arrest the same year. At the trial, in January 1972, Bukovsky was accused of slandering Soviet psychiatry, contact with foreign journalists, and possession and distribution of samizdat (he was charged with Article 70-1, and sentenced to seven years of imprisonment plus five years in exile).

Together with a fellow inmate in the prison camp No. 35 near Perm, psychiatrist Semyon Gluzman, he coauthored A Manual on Psychiatry for Dissidents[1] in order to help other dissidents fight abuses of the authorities.

The fate of Bukovsky and other political prisoners in the Soviet Union, repeatedly brought to attention by Western human rights groups and diplomats, was a cause of embarrassment and irritation for the Soviet authorities.

On December 18, 1976, while imprisoned, Bukovsky was exchanged for former Chilean Communist leader Luis Corvalán. In his autobiographical book, To Build a Castle, Bukovsky describes how he was brought to Switzerland handcuffed.

In the United Kingdom 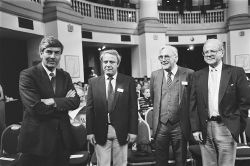 Since 1976, Bukovsky lived in Cambridge, England, focusing on neurophysiology and writing. He received a Masters Degree in Biology and has written several books and political essays. In addition to criticizing the Soviet regime, he also picked apart what he calls "Western gullibility," a lack of a tough stand by Western liberalism against Communist abuses.

In 1983, together with Vladimir Maximov and Eduard Kuznetsov he co-founded and was elected president of the international anti-Communist organization Resistance International (Интернационал сопротивления).

In April 1991, Vladimir Bukovsky visited Moscow for the first time since his forced deportation. In the run-up to the 1991 presidential election Boris Yeltsin's campaign considered Bukovsky as a potential vice-presidential running-mate (other contenders included Galina Starovoitova and Gennady Burbulis). In the end, the vice-presidency was offered to Alexander Rutskoi.

In 1992, after the collapse of the Soviet Union, President Yeltsin's government invited Bukovsky to serve as an expert to testify at the CPSU trial by the Constitutional Court of Russia, where the communists were suing Yeltsin for banning their party. The respondent's case was that the CPSU itself had been an unconstitutional organization. To prepare for his testimony, Bukovsky requested and was granted access to a large number of documents from Soviet archives (then reorganized into TsKhSD). Using a small handheld scanner and a laptop computer, he managed to secretly scan many documents (some with high security clearance), including KGB reports to the Central Committee, and smuggle the files to the West.[2] The event that many expected would be another Nuremberg Trial and the beginnings of reconciliation with the Communist past, ended up in half-measures: While the CPSU was found unconstitutional, the communists were allowed to form new parties in the future. Bukovsky expressed his deep disappointment with this in his writings and interviews:

Having failed to finish off conclusively the communist system, we are now in danger of integrating the resulting monster into our world. It may not be called communism anymore, but it retained many of its dangerous characteristics…. Until the Nuremberg-style tribunal passes its judgment on all the crimes committed by communism, it is not dead and the war is not over.[3]

It took several years and a team of assistants to compose the scanned pieces together and publish it. The same collection of documents is also massively quoted in Bukovsky's Judgement in Moscow, which was published in 1994, translated into many languages and attracted international attention.

In 1992, a group of liberal deputies on the Moscow City Council proposed Bukovsky's candidacy for elections of the new Mayor of Moscow, following the resignation of the previous Mayor, Gavriil Popov. Bukovsky refused the offer. In early 1996 a group of Moscow academics, journalists and intellectuals suggested that Bukovsky should run for President of Russia as an alternative candidate to both incumbent President Boris Yeltsin and his Communist challenger Gennady Zyuganov. No formal nomination was initiated. In any case, Bukovsky would not have been allowed to run, as the Russian Constitution stipulates that any presidential candidate must have lived in the country continuously for ten years prior to the election.

In 1997, during the General Meeting in Florence, Bukovsky was elected General President of the Comitatus pro Libertatibus- Comitati per le Libertà- Freedom Committees, the international movement aimed to defend and empower everywhere the culture of liberties. Bukovsky promoted together with Dario Fertilio and Stéphane Courtois, a writer and an historian, the Memento Gulag, or Memorial Day devoted to the victims of communism and totalitarian regimes, to be held each year, on November 7 (anniversary of the Bolshevik Revolution). Since then, the Memento Gulag has been celebrated in Rome, Bucharest, Berlin, La Roche sur Yon, and Paris.

In 2002, Boris Nemtsov, a member of the Russian Duma (parliament) and leader of the Union of Right Forces, and former Deputy Prime Minister of Russia, visited Vladimir Bukovsky in Cambridge to discuss the strategy of the Russian opposition. Bukovsky told Nemtsov that, in his view, it is imperative that Russian liberals adopt an uncompromising stand toward what he sees as the authoritarian government of President Vladimir Putin. In January 2004, together with Garry Kasparov, Boris Nemtsov, Vladimir V. Kara-Murza and others, Vladimir Bukovsky co-founded the Committee 2008, an umbrella organization of the Russian democratic opposition, whose purpose was to ensure free and fair presidential elections in 2008.

In 2005, Bukovsky participated in They Chose Freedom,[4] a four-part documentary on the Soviet dissident movement. In 2005, with the revelations about captives in Guantanamo, Abu Ghraib and the CIA secret prisons, Bukovsky criticized the rationalization of torture.[5] Bukovsky warned about some parallels between the formations of the Soviet Union and European Union.[6] 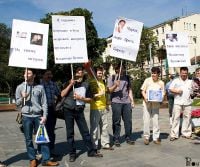 On May 28, 2007, Bukovsky agreed to become a candidate in the Russian presidential election.

More than 800 participants nominated Bukovsky for president on December 16, 2007, in Moscow. Bukovsky secured the required turnout and submitted his registration to the Central Election Commission on December 18, 2007.[7]

The Election Commission turned down Bukovsky's application, claiming that he failed to give information on his activity as a writer when submitting documents to the Election Commission, that he was holding a British residency permit, and that he has not been living on Russian territory over the past ten years.[8]

Bukovsky was among the first 34 signatories of "Putin must go," an online anti-Putin manifesto published on 10 March 2010. In May 2012, Vladimir Putin began his third term as president of the Russian Federation after serving four years as the country's prime minister. The following year, Bukovsky published a collection of interviews in Russia which described Putin and his team as The heirs of Lavrentiy Beria: Putin and his team, Stalin's last and most notorious secret police chief.[9]

In March 2014 Russia annexed Crimea after Ukraine had lost control of its government buildings, airports and military bases in Crimea to unmarked soldiers and local pro-Russian militias.[10] The West responded with sanctions targeted at Putin's immediate entourage, and Bukovsky expressed the hope that this would prove the end of his regime.[11]

In October 2014, the Russian authorities declined to issue Bukovsky with a new foreign-travel passport.[12] The Russian Foreign Ministry stated that it could not confirm Bukovsky's citizenship.

On March 17, 2015, at the long-delayed inquiry into Alexander Litvinenko's fatal poisoning Bukovsky gave his views as to why the former FSB man had been murdered.[13] Interviewed on BBC TV eight years before, Bukovsky expressed no doubt that the Russian authorities were responsible for the London death of Litvinenko on November 23, 2006.[14]

In 2015, the UK Crown Prosecution Service announced prosecution of Bukovsky for "prohibited images" of children allegedly found on his computer.[15] Bukovsky described the accusations as absurd and said that the tip about the images – which he initially said were planted on his computer by a backdoor program – was passed through Europol from Russian security services. Bukovsky also noted that while the original announcement by the CPS accused him of "possession and making," the prosecution materials passed to the court only charged "possession."[16]

In early May 2015, it was reported that Bukovsky had undergone a nine-hour heart operation in a private German clinic, during which he was given two artificial valves. Subsequently, Bukovsky was kept in a medically-induced coma for three days to improve his chances of recovery. After partial recovery from his lengthy heart surgery, Vladimir Bukovsky responded to charges brought against him by the UK Crown Prosecution Service earlier in the year. Issuing a High Court writ for libel, Vladimir Bukovsky said that the CPS had defamed him, and claimed damages of £100,000.[17] Bukovsky was later ruled to be too ill to stand trial.[18]

A funeral service, in accordance with the rites of the Russian Orthodox Church but in the English language, was conducted on November 19, 2019 at the cemetery chapel at Highgate Cemetery, London.

An activist, a writer, and a neurophysiologist, Vladimir Bukovsky is celebrated for his part in the campaign to expose and halt the political abuse of psychiatry in the Soviet Union. Through the publication of his first-hand experience in Soviet prisons, labor camps, and forced-treatment psychiatric hospitals Bukovsky informed the world of this abuse.

After being exchanged for the former Chilean Communist leader Luis Corvalán, Bukovsky took up residence in the United Kingdom where he remained active in his work to expose abuses in the Soviet Union. He was a member of the international advisory council of the Victims of Communism Memorial Foundation, a director of the Gratitude Fund (set up in 1998 to commemorate and support former dissidents), and a member of the International Council of the New York City-based Human Rights Foundation. He was also a Senior Fellow of the Cato Institute in Washington, D.C. In 2001, Vladimir Bukovsky received the Truman-Reagan Medal of Freedom, awarded annually since 1993 by the Victims of Communism Memorial Foundation.

By confronting the Soviet abuse of power, Bukovsky and other dissidents helped to pave a way for the collapse of communism.