Donald David Dixon Ronald O’Connor (August 28, 1925 – September 27, 2003) was a dancer, singer, and actor who was discovered at the age of 11 and debuted in the 1938 film Sing, You Sinners. His early roles came playing "the star as a child"—the younger version of the film's leading man for prologue and flashback sequences.

His fame peaked in the 1950s in a series of movies in which he co-starred alternately with Gloria Jean, Peggy Ryan, and Francis the Talking Mule. His performance in the musical Singin’ in the Rain (1952), featured a vaudeville-inspired comedy solo Make 'Em Laugh, that allowed him to show off his multi-faceted virtuosity and became a film classic.

O'Connor was a favorite of millions of people around the world because of the joy he brought into their lives with his performances.

Donald O’Connor was born on August 28, 1925, in Chicago, Illinois. He was the seventh child born to John Edward "Chuck" O'Connor and Effie Irene Crane O'Connor. Three of the children born to the O'Connor's died in infancy and Donald was the last child the couple had. Both Chuck and Effie began their careers in the circus, where they met and fell in love. Effie was a trapeze performer and only 15 years old when she married the 28 year old Chuck. In describing his father, who was an acrobat with Ringling Brothers-Barnum and Baily Circus, Donald said:

My father started out as a circus 'leaper'. He'd run down a ramp, jump over an elephant and land on a mat. He was a singer, a dancer, an acrobat, a trapeze artist, a clown, a comedian, and also a strong man. He did a little bit of everything, because the more you did the more you made. He was 5'5" and weighed 220 pounds. He was very light on his feet, though: he was known as the Nijinsky of acrobats. The height he could get was incredible. [1]

Together, the couple decided to leave the circus and use their original talents to start their own traveling act for vaudeville.

O'Connor appeared on stage when he was only three days old, at his mother's side as she played the piano. By thirteen months O'Connor was being balanced in the hands of his elder brothers, doing acrobatic tricks and dancing around on stage. O'Connor's father loved when another member of the family could perform because it meant an extra twenty-five dollars a week. Each of the surviving O'Connor children worked in the family act.

At thirteen months, tragedy struck the O'Connor family. O'Connor's six year old sister, Arlene, and O'Connor himself were hit by a car when they were crossing the street. Arlene was killed instantly. Only thirteen short weeks later, Chuck O'Connor collapsed on stage and died from a heart attack. He was only 47 years old. Though Donald was only infant at that time, he was very affected by his family tragedies as he grew into “the toughest little kid in show business.”[2]

Even after the tragic events, the O'Connor family went on performing. The group consisted of O'Connor, his brother Billy (including his wife and child), his brother Jack, and his mother. The family lived by the credo that the "show must go on." On one occasion O'Connor fell and hurt his arm between acts, but went out and performed as usual, doing all the handstands and dancing that the number called for. After the show his mother realized how sick he looked and took him to the hospital where the doctor discovered that he had broken his arm in the fall.

O'Connor always described his vaudeville years as an exciting and happy time. They were billed as the O'Connor Family, the Royal Family of Vaudeville and toured the country doing singing, dancing, comedy, and acting: "Our entire family composed an act. We really didn't have a choice; if you were in the family you appeared in the act. I loved vaudeville. The live audiences created a certain spontaneity."[3]

The O’Connors shared the stage with everyone from the Marx Brothers, to Abbott and Costello, to Jimmy Durante, to Al Jolson. Donald learned from them all: You learned to be great real fast. You went out there and caught the audience’s attention in the first 25 seconds or you ruined it for the family. If you heard laughter you knew it was working.[4]

Donald never went to school, and had no dance training until he was 15, learning his first dance steps on the streets. He later said:

I learned two dance routines. I looked like the world's greatest dancer. I did triple wings and everything. But I had never had any formal training. So, when I went into movies and started working with all those great dancers, I had a terrible time. I couldn't pick up routines because I didn't have any formal training. At the age of 15 — from 15 on, I really had to learn to dance. And that's quite old for someone to start dancing real heavy, professionally.[5]

O'Connor and his brothers started out in films doing acts from their vaudeville shows. At age 11, a talent scout noticed O'Connor and he began his own career in films with his first credited role playing next to Bing Crosby and Fred MacMurray in Sing, You Sinners.

As a child actor O'Connor made 11 films between 1938 and 1939. He usually played the young orphan or the troublesome kid. He gained roles as Huck Finn in Tom Sawyer, Detective and played a young Beau in Beau Geste (1939). His film career faded in 1939 when his mother called him back to the family vaudeville show because the show had lost O'Connor's elder brother Billy to scarlet fever and O'Connor felt a responsibility to see the show through. 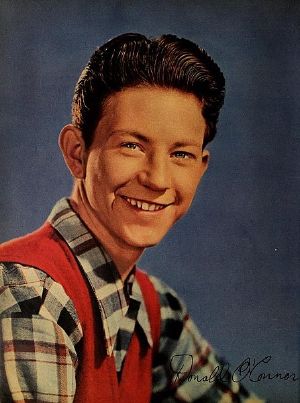 In 1942, O'Connor was rediscovered when an agent for Universal Pictures saw the vaudeville show and signed him up to perform with a group of young and talented teenagers known as the Jivin' Jacks and Jills. During the dance numbers, O'Connor was paired with Peggy Ryan and the couple became a hit. Both went on to receive larger screen roles. O'Connor's fame started to mount with Mister Big in 1943.

O'Connor's screen career was again interrupted when, at age 18, he joined the armed forces in 1944. Donald was assigned to Special Services and he gave over 3,000 performances for the troops. Right before he left for the army, O'Connor married Gwen Carter (17 years old) on February 7, 1944. The marriage lasted ten years and resulted in one daughter, Donna.

O'Connor worked non-stop in movies and television upon his return to show business. In 1949 he was given the leading role in Francis and it proved so successful that Universal made six more of the films, all starring O'Connor. Arthur Lubin, who directed the series, later recalled that O'Connor was a great comedy actor, "Donald knew exactly when to pause to get the laugh." However, he "got very difficult" to work with after a while. "He started drinking, and I think he had problems at home."[6]

It was from working on these films that O'Connor contracted Q Fever, a disease spread by ticks living on cattle and other animals. He became so sick with Q Fever, that he had to pass on playing Bing Crosby's sidekick in White Christmas. All of the dance numbers had been written for him, and the part eventually went to Danny Kaye.

O'Connor garnered the most acclaim for his role in the 1951 blockbuster, Singin' in the Rain, as well as a place in film history. His character didn't have a solo, and when someone suggested the newly written song, Make 'Em Laugh, O'Connor took it and made it his own. Gene Kelly was responsible for all of the choreography of the film, except that number, which he said was all Donald's doing. Reportedly after performing it O'Connor needed three days of bed rest. When he came back to work, he learned that the camera had been out of focus and that he would have to do it all over again.

In 1956, two years after his divorce, he married Gloria Noble, the couple had three children together and were married for the rest of O'Connor's life. 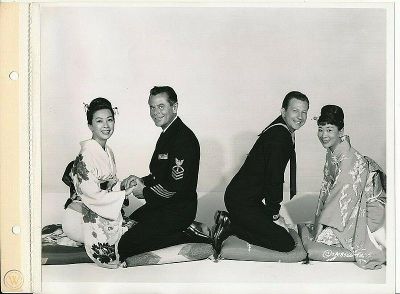 O'Connor teamed with Glenn Ford in Cry for Happy (1961) at Columbia and he played the title role in The Wonders of Aladdin (1961) for MGM.

During the 1970s, O'Connor worked on overcoming his alcoholism, and after his recovery he made a brilliant and notable comeback as a gaslight-era entertainer in the 1981 film Ragtime. It was his first film in 15 years. In 1992 he had a small role with Robin Williams in Toys.

O'Connor's last feature film was the 1997 Jack Lemmon-Walter Matthau comedy Out to Sea. In the film, O'Connor played an aged dance host on the cruise ship. 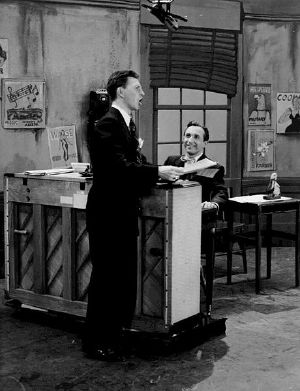 O'Connor also distinguished himself in stage and television roles. He received an Emmy nomination for his work as host on NBC's popular Colgate Comedy Hour in the 1950s. He also had a short-lived television series during the late 1960s.

In the 1970s he expanded his repertoire to include dramatic roles, including a performance on a 1976 episode of Police Story.

In 1981 he made two attempts to headline Broadway shows. The first was Bring Back Birdie, co-starring Chita Rivera. It was a sequel to the very successful Bye, Bye Birdie of 20 years before. It only ran four days so Donald moved on to a stage version of Harvey called Say Hello to Harvey! which debuted in Toronto, Ontario in 1981. The production was intended for Broadway, but it never made it. Donald's next Broadway effort, as Cap'n Andy in a 1983 revival of Showboat, was such a success that he toured with the show periodically for many years.

O'Connor also made frequent television appearances in the 1980s, including Fantasy Island and Love Boat stints. He also received an Emmy award nomination in the category of 'Outstanding Individual Achievement - Special Events' for his impressive musical presentation on the 1980 Academy Awards program.

His television efforts in the 1990s include Murder She Wrote, The Nanny and Fraiser. In 1992 he gave a standout dramatic performance in HBO's Tales From the Crypt. Also in 1992 he produced a work out tape entitled Let's Tap where he gives instruction on 12 different tap steps.

In 1998 Donald signed on for The Fabulous Palm Springs Follies, a revue featuring 54-year-old plus performers. He was their headliner, dancing and singing his way through eight performances a week.

On September 27, 2003, Donald O'Connor died from congestive heart failure at the age of 78. Besides his widow, Gloria and daughter Alicia (born in 1957), O'Connor was survived by his daughter, Donna (born in 1945 to O'Connor and his first wife), and two sons, Donald (born in 1960) and Kevin (born in 1961).[7] His family reported that just before dying he joked: “I’d like to thank the Academy for the lifetime achievement award I will eventually get.” [8]

Retrieved from https://www.newworldencyclopedia.org/p/index.php?title=Donald_O%27Connor&oldid=1077074
Categories:
Hidden category:
This page was last edited on 23 August 2022, at 14:36.
Content is available under Creative Commons Attribution/Share-Alike License; additional terms may apply. See Terms of Use for details.