Cowpox is a rare, mildly contagious skin disease caused by the cowpox virus, which has gained fame because of its use in the eighteenth century for immunization against smallpox, a deadly disease from the same family of viruses as cowpox. Cowpox received its name from milkmaids touching the udders of infected cows; however, today it is acquired most often from contact with an infected cat and is also known as catpox and the virus as catpox virus.

The virus is found in Europe, but is very rare today. Infection in humans results in localized, pustular (producing pus) lesions at the site the virus enters the skin; death is very rare (Aguayo and Calderón; Levin 2007).

The discovery of this nature-provided means of inoculating against smallpox led the way in elimination of a disease that killed an estimated 400,000 Europeans each year during the eighteenth century, and even an estimated 300 to 500 million deaths in the twentieth century before smallpox was completely eradicated.

The main reservoir hosts of the cowpox virus are rodents, but it can spread to cattle, cats, humans, and zoo animals, such as elephants and large felids (Aguayo and Calderón). The main reservoir hosts are woodland rodents, particularly voles and wood mice. It is from these rodents that domestic cats contract the virus. Humans, cattle, and cats are only accidental hosts (Levin 2007). Symptoms in cats include lesions on the face, neck, forelimbs, and paws, and less commonly upper respiratory tract infection (Mansell and Rees 2006).

The cowpox virus is believed to be transmitted to humans by direct contact with an infected animal, with the virus entering through broken skin (Levin 2007). Although historically cowpox infection has been associated with transmission from cattle, from the infected teats of cows being milked, today it is most commonly acquired from domestic cats (Aguayo and Calderón).

Cowpox in humans tends to be self-limiting, with the immune system able to control the infection and the only remnant being scars at the site of the lesions (Levin 2007).

Human cases today are very rare. Fewer than 150 human cases have been reported, with most incidences having been reported in Great Britain, and smaller numbers of cases from Germany, Belgium, France, Netherlands, Sweden, Finland, Norway, and Russia (Levin 2007). The United States has had no reported cases of cowpox (Levin 2007). According to Vestey et al. (1991), cowpox virus infections between 1985 and 1990 were reported at the rate of approximately two per year, but they note that the actual incidences of the disease was probably considerably higher.

Cowpox role in immunization against smallpox 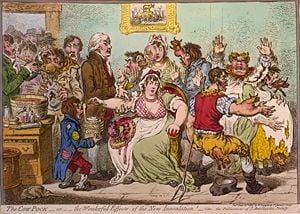 The deadly smallpox disease is caused by the virus Variola virus, which is related to the cowpox virus. After infection with the disease cowpox, the body (usually) gains the ability of recognizing the similar smallpox virus from its antigens and so is able to fight the smallpox disease much more efficiently. The cowpox virus was used to perform the first successful vaccination against another disease when it was employed against smallpox.

The credit for immunization against smallpox generally goes to Edward Jenner (1749-1823), who in 1796 inoculated against smallpox using cowpox. While Edward Jenner has been recognized as the first doctor to give sophisticated immunization, at least six other people before Jenner had independently tested the possibility of using the cowpox vaccine as an immunization for smallpox in humans, including Benjamin Jestey in 1774 and the German teacher Peter Plett in 1791 (Plett 2006). Two decades before Jenner's inoculation, British dairy farmer Benjamin Jestey noticed that "milkmaids" did not become infected with smallpox, or displayed a milder form. Jestey took the pus from an infected cow's udder and inoculated his wife and children with cowpox, in order to artificially induce immunity to smallpox during the epidemic of 1774, thereby making them immune to smallpox. It had been reported that farmers and people working regularly with cows and horses were often spared during smallpox outbreaks. Between 1790 and 1792, Plett (1766-1823), who recognized the wider importance of his discovery, reported his findings to the Medical Faculty of the University of Kiel, but the faculty disregarded Plett's reports and neither responded to them nor changed their preferred method, variolation (Plett 2006).

Twenty-two years after Jestey, Jenner found that by injecting a human with the cowpox virus, the immunized human was then also immune to smallpox. Vaccination to prevent smallpox was soon practiced all over the world. During the nineteenth century, the cowpox virus used for smallpox vaccination was replaced by Vaccinia virus. Vaccinia is in the same family as cowpox and Variola, but is genetically distinct from both. After successful vaccination campaigns throughout the nineteenth and twentieth centuries, the World Health Organization (WHO) certified the eradication of smallpox in 1979. The word vaccination is variously attributed to the Latin root vacca, meaning "cow," or from Latin root vaccinia.

The vaccinia virus now used for smallpox vaccination is sufficiently different from the cowpox virus found in the wild as to be considered a separate virus (Yuan 1999).

Kinepox (cowpox fluid) is an alternate term used for the smallpox vaccine in early nineteenth-century America. Popularized by Jenner in the late 1790s, kinepox was a far safer method for inoculating people against smallpox than the previous method, variolation, which had a three percent fatality rate. (Variolation involved purposefully infecting a person with smallpox (Variola) in a controlled manner so as to minimize the severity of the infection and also to induce immunity against further infection.)

In a famous letter to Meriwether Lewis in 1803, Thomas Jefferson instructed the Lewis and Clark expedition to "carry with you some matter of the kine-pox; inform those of them with whom you may be, of its efficacy as a preservative from the smallpox; and encourage them in the use of it..." (Jefferson 1803). Jefferson had developed an interest in protecting Native Americans from smallpox having been aware of epidemics along the Missouri River during the previous century. One year prior to his special instructions to Lewis, Jefferson had persuaded a visiting delegation of North American Indian Chieftains to be vaccinated with kinepox during the winter of 1801-1802. Unfortunately, Lewis never got the opportunity to use kinepox during the pair's expedition as it had become inadvertently inactive—a common occurrence in a time before vaccines were stabilized with preservatives like glycerol or kept at refrigeration temperatures.