Black-and-white colobus (plural: Clobuses or colobi) is the common name for any of the medium-sized, commonly arboreal, Old World monkeys comprising the genus Colobus of the Colobinae subfamily, characterized by a slender body, long tail, absent or rudimentary thumbs, prominent rump callosities, and a complex stomach that aids digestion of cellulose. There are five extant species in the Colobus genus. These primates are found in Africa, often in tropical rainforests.

The name colobus (or colobus monkey) also is used as a collective term for members of this genus; however, there also are red colobi that comprise the genus Piliocolobus, and the olive colobus is the sole extant member of the genus Procolobus.

The black-and-white colobus monkeys provide important functions in their ecosystems, consuming plant matter and serving as prey for various mammals (large cats such as leopards, chimpanzees), birds of prey (eagles), and reptiles (snakes). They also may disperse seeds that they consume.

For humans, various species, such as the king colobus (C. polykomos), Angolan colobus (C. angolensis), and black colobus (C. satanas) have been hunted by people for their fur, and sometimes for food and for rituals. The guereza (C. guereza) is used in animal testing and also is one of the monkey species that is sacred in Hindu and Buddhist religions. And more generally, the unique form and behavior of the black-and-white colobus, with their arboreal abilities of leaping long distances between branches, adds a value in ecotourism.

The black colobus is one of the most endangered species of African primates and the king colobus also is considered to be highly endangered. Major threats include habitat destruction and hunting. 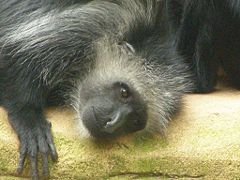 King colobus (C. polykomos). The stump in place of a functional thumb can be seen on the hand.

Black-and-white colobi comprise one of several genera in the subfamily Colobinae of the Cercopithecidae family (Old World monkeys). Members of this subfamily are distinguished from the other Old World monkey family Cercopithecinae (baboons, macaques, mangabeys, drill, mandrills, and so on) by the absence of cheek pouches and the presence of prominent ischial (rump) callosities, which are contiguous in males and separate in females (Kim 2002). Other members of the Colobinae subfamily are the leaf monkeys, proboscis monkeys, langurs, and other relatives. As Old World monkeys, colobi are characterized by close-set nostrils that are downward or forward facing, a tubular ear bone, and a tail that is not prehensile (adapted for grasping or holding).

Black-and-white colobi are medium-sized monkeys with slender bodies and long tails. All five extant species in Colobus are characterized by a reduced or absent thumb, prominent ischial callosities (a callus, or piece of skin that has become thickened as a result of repeated contact and friction, occurring on the animal's buttocks), and a complex stomach that enables them to digest mature or toxic vegetation, aiding in the digestion of cellulose (Thompson 2002). 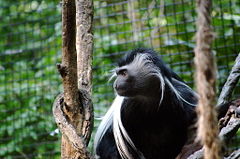 The word "colobus" comes from Greek ekolobóse, meaning "he cut short" or "mutilated," and is so named because its thumb is essentially absent or is a stump that is represented only by a small phalangeal tubercle that may at times bear a nail (Kim 2002). This lack of a thumb may aid their moving quickly through the trees (Kim 2002).

The black-and-white colobus monkeys generally have black fur with white markings. The king colobus (Colobus polykomos) has the chest and whiskers that are white, while the rest of the body is black; the ail is entirely white and not tufted (Landes 2000). The guereza (C. guereza) has a gray face without fur, a glossy black coat, a U-shaped white mantle found on the sides, the face and callosities surrounded by white, and the tail a whitish or yellowish color form tip to base and a large white tuft on the end of the tail (Kim 2002). The black colobus (C. satanas) has a black coat of fur and black tail (Blair 2002). The Angolan colobus (C. sangolensis) have long silky hair, a black body with white brow band, white cheeks, white throat, long-haired white epaulettes on the shoulders and the lower half of the tail is white (Thompson 2002). Young Angolan colobi are born completely white (Thompson 2002).

Members of the colobus genus have a complex stomach divided into two regions, allowing fermentation of foliage by anaerobic bacteria (Kim 2002).

The black-and-white colobus is very arboreal and jump long distances between branches. The Angolan colobus monkeys are the most arboreal of all African monkeys, and generally remain in the canopy of trees, but will occasionally come to the ground near streams to eat vegetation (Thompson 2002). However, the guereza (C. guereza) is known to feed and travel on the ground when the trees are not densely spaced (Kim 2002). And the black colobus (B. satanas) spend much of their time on the ground as quadrupeds, although they occasionally swing through the canopy, particularly when food is scarce and they are dependent on more mature leaves (Blair 2002).

Black-and-white colobi are herbivorous. The Angolan colobus is primarily folivorious, feeding on leaves, but they also feed on stems, bark, flowers, shoots, fruits, buds, and even some aquatic plant fruits and insects (Thompson 2002). The black colobus prefers seeds, although it also feeds on leaves of climbing vines and immature leaves; when food is scarce they will feed on mature leaves, immature fruit, and flowers (Blair 2002).