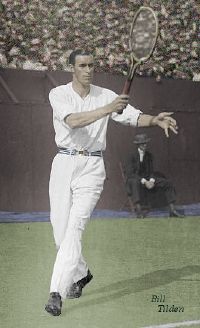 During the 1920s, he went undefeated for seven years. He was among the most famous American athletes of his generation, which included Red Grange, Jack Dempsey, Bobby Jones, and Babe Ruth. He won fans with his penchant for drama and with his wide array of shots. His outright dominance of tennis led him to be voted in 1950, by the Associated Press as the best tennis player of the first half of the twentieth century.

Tragically, he is not widely remembered in the modern era as his two arrests for sexual misbehavior with teenage boys in the late 1940s led to incarcerations. After all of his great accomplishments, he ended up being shunned by much of the tennis world.

Tilden was born to Selina Hey and William T. Tilden, Sr. Before his birth, his parents were beset by tragedy—diptheria brought about the deaths of three of his siblings in 1884, all in the span of three weeks. His parents had two more children: Tilden and his brother Herbert. As a result Bill Tilden lived a sheltered life as a child. He was tutored at home until junior high school. When Tilden was 15, his mother contracted Bright's disease and was confined to a wheelchair. His father, who was considering a campaign for mayor of Philadelphia, was rarely home.

In 1910, he graduated from Germantown Academy in Philadelphia, and entered the University of Pennsylvania. In 1911, when Tilden was 18, his mother died; even though his father was still alive and maintained a large house staffed with servants, he was sent a few houses away to live with a maiden aunt. Three years later, his father died from a kidney infection; a few months later, his beloved brother Herbert died of pneumonia. At age 22, Tilden had experienced losing his entire family to tragic and untimely deaths.[1]

Unique among tennis players, Tilden became a great player only at the relatively advanced age of 27. Prior to 1920, he had won a number of national doubles titles but his first taste of recognition came as the losing finalist at the U.S. Nationals in 1917 and 1918.

He made considerable strides after the winter of 1919-20, when he moved to Rhode Island, and where, on an indoor court, he devoted himself to retooling his relatively ineffective backhand. He emerged with a new grip and a powerful new backhand in the summer of 1920, and for the rest of the decade he dominated world tennis.

In spite of his powerful serve, Tilden preferred to play mostly from the backcourt, where he dazzled opponents with his ever-changing tactics: A mixture of guile, of chopped and sliced shots, of dropshots and lobs, and of sudden, powerful groundstrokes deep to the corners. He hit superbly angled shots on nearly impossible returns and liked nothing better than to face an opponent who threw powerful serves and ground strokes at him and then rushed the net—one way or another Tilden would find a way to hit the ball past him.

His lasting dominance was attributed to relatively consistent good health. Floating cartilage in his knee hindered him seriously from time to time. But it was during the mid-1920s that an infection from a cut on his right hand's middle finger put his playing career in doubt. amputating his finger and even his entire hand was considered, but only the tip of Tilden's middle finger was removed, leaving a short stump. After some adjustments to his technique, Tilden was able to continue his winning ways.

Tilden had long been at odds with the rigid amateur directors of the United States Lawn Tennis Association about his income derived from newspaper articles he wrote about tennis. In 1928, they decreed that he would be suspended from amateur competition and would not be allowed to play in the Davis Cup challenge round between the United States and France. Although he had been doing this for many years, officials had always ignored it. They suspended him for six months.

When the suspension was announced and his French fans heard that Tilden would not be playing they sent diplomats to ask Calvin Coolidge, then president of the United States, to allow Tilden to play. The president told the American ambassador in Paris to disregard the U.S. Davis Cup team captain, and to select Tilden for the team. Tilden was suspended after the match—which he won.

In the late 1920s the great French players known as the "Four Musketeers" (Jean Borotra, Henri Cochet, René Lacoste, and Jacques Brugnon) finally wrested the Davis Cup away from Tilden and the United States, as well as his domination of the singles titles at Wimbledon and Forest Hills.

His last Grand Slam victory was in 1930, when at age 37, he was Wimbledon's oldest gentleman's singles champion.

In 1931, in need of money, he turned professional and joined the young pro tour, which had begun in 1927. He joined with Vincent Richards, Hans Nusslein, and Roman Najuch of Germany and Karel Kozeluh of Czechoslovakia. He played his first match as a professional against Kozeluh at Madison Square Garden in front of 13,500 people. He went on to win the debut tour against the Czech, 63 matches to 13.

As the marquee name on the young tour, Tilden set the path for other similarly popular players to turn professional. Still, even with greats such as Ellsworth Vines, Fred Perry, and Don Budge as his opponents—all of whom were current or recent World No. 1 players—it was often Tilden who ensured the box-office receipts.

In 1934, he won nine of his first 20 matches against Vines. And in 1941, at 48 years old, he toured the United States playing head-to-head matches with Don Budge, who at that time was incontestably the greatest player in the world. Even at his advanced age, Tilden was able to play competitively against these younger players, for at least the first set, if not the whole match.

The tours grew in the 1930s and '40s, and Tilden remained an attraction even though he was approaching the age of 50.

In 1945, at age 52, Tilden and his long-time doubles partner Vinnie Richards won the professional doubles championship; they had won the United States amateur title 27 years earlier in 1918.

Tilden's fame led him to have many famous friends, particularly movie stars. He moved to Hollywood and coached many of them in tennis, including Greta Garbo, Katharine Hepburn, and Tallulah Bankhead. He also became good friends with Charlie Chaplin. Tilden played at Chaplin's tennis parties, where he coached Errol Flynn, Joseph Cotten, Montgomery Clift, Spencer Tracy, and Olivia deHavilland.

His affinity for theatrics was also manifested off the court, as he wrote many unsuccessful short stories and novels about misunderstood but sportsman-like tennis players, and dreamed of being a star on Broadway and in Hollywood. Much of his off-the-court time—as well as his money—was devoted to these pursuits, with failure the inevitable result.

Although Tilden is widely considered to be the greatest tennis player of all time, his life story ended in tragedy. Tilden was a closeted homosexual, but in later years his sexual orientation was given much attention after two publicized arrests for indiscretion with a minor. Tilden was first arrested on Nov. 23, 1946, and was charged with a misdemeanor—contributing to the delinquency of a minor. He was sentenced to a year in prison and served seven and a half months. He was arrested again on Jan. 28, 1949, for a similar offense and was sentenced to a year for violating his probation. He served ten months in prison.

After his second incarceration, Tilden was increasingly shunned by the tennis world. When this became public knowledge, he was no longer allowed to enter tennis clubs or to play on the professional circuit. By the end of his life, his former friends had abandoned him. Some of them literally turned their backs when he approached. The officials at the University of Pennsylvania removed his name from their alumni files. The Germantown Cricket Club, where he had won many of his Davis Cup matches, removed his pictures from their walls. The same happened at Forest Hills.[4]

On June 5, 1953, he died of a heart attack in West Hollywood, California. He was alone, and his rackets were found beside his bed, packed and ready to go to the 1953 U.S. Championships.

The outstanding tennis player of the 1920s and 1930s, and perhaps the single most influential person in the history of tennis, Tilden brought a refreshing and revolutionary mind to the sport. Tilden may have spent more time analyzing the game of tennis than anyone before or since. He wrote many books about tennis strategy, including The Art of Lawn Tennis and Match Play and the Spin of the Ball.

Tilden was posthumously inducted into the International Tennis Hall of Fame in Newport, Rhode Island, in 1959.

Retrieved from https://www.newworldencyclopedia.org/p/index.php?title=Bill_Tilden&oldid=1094978
Categories:
Hidden category:
This page was last edited on 11 January 2023, at 23:42.
Content is available under Creative Commons Attribution/Share-Alike License; additional terms may apply. See Terms of Use for details.