Grange was a three-time all-American in college with 31 touchdowns and 3,362 yards in only 20 games. Less than a week after he completed his college eligibility in 1925, at a time when pro football was unpopular, he signed with the Chicago Bears under George Halas. Making over $100,0000 his first year he became football's first superstar and a national hero. His popularity as a professional gave the pro game its launch into legitimacy.

He ranked with Babe Ruth and Jack Dempsey in the 1920s as the most heralded figures in America's "golden age of sport." When Sports Illustrated magazine did a special issue in 1991 on the greatest moments in sports, Grange was selected for the cover.[2] In 2008 ESPN named Grange the The Greatest College Football Player to ever play.[3]

Grange was born in Forksville, Pennsylvania as the third child of Sadie and Lyle Grange.[4] His father was the foreman of three lumber camps.[4] When he was five, his mother died of pneumonia and his father moved the family to Wheaton, Illinois, where his four brothers had settled.[5] In Wheaton his father became the chief of police.[6]

To make ends meet Grange and his brother had to work to supplement their father's meager income. Red took on the job of delivering ice during the summer. This not only helped pay the bills but also helped build his muscles and earned him the nickname "The Wheaton Iceman." In an interview Grange said of the job, "I started working summers on the ice truck when I was a kid, and I kept it up for years, even after I became a professional football player. My dad, he was always of the opinion that hard work never hurt anyone. And it was great conditioning for an athlete, walking all day long up and down stairs and carrying that stuff."[6]

At Wheaton High School, Grange earned 16 varsity letters in four sports (football, baseball, basketball, and track)[6] during each of the four years he attended, notably scoring 75 touchdowns and 532 points for the football team.[6] As a high school junior, Grange scored 36 touchdowns and led Wheaton High School to an undefeated season. In his senior year his team won every game but one, which was lost 39-0 to Scott High School in Toledo, Ohio.[4]

After graduation Grange enrolled in the University of Illinois, where he was admitted to the Zeta Psi fraternity.[6] He had initially planned to play only basketball and track but was coaxed into changing his mind by his fraternity. In his first collegiate football game, he scored three touchdowns against Nebraska.[6] In seven games as a sophomore he ran for 723 yards and scored 12 touchdowns, leading Illinois to an undefeated season and the 1923 Helms Athletic Foundation national championship.[7]

Grange vaulted to national prominence as a result of his performance in the October 18, 1924, game against the University of Michigan. This was the grand opening game for the new Memorial Stadium, built as a memorial to University of Illinois students and alumni that served in World War I.[6]

Illinois was facing a University of Michigan team that had been unbeaten in twenty consecutive games. Grange scored touchdowns the first four times he touched the ball, in twelve minutes of the first quarter. He began with a 95-yard kickoff return, then had runs of 67, 56, and 45 yards from scrimmage. He was taken out until the third quarter, when he scored on a 12-yard run. Then he threw a 23-yard touchdown pass as Illinois won, 39-14. The four-touchdown first quarter outburst equaled the number of touchdowns allowed by Michigan in the previous two seasons.[7]

A streak of fire, a breath of flame
Eluding all who reach and clutch;
A gray ghost thrown into the game
That rival hands may never touch;
A rubber bounding, blasting soul
Whose destination is the goal — Red Grange of Illinois

However, it was Chicago sportswriter Warren Brown who nicknamed Grange, The Galloping Ghost. When questioned in a 1974 interview, "Was it Grantland Rice who dubbed you the Galloping Ghost?" Grange replied, "No, it was Warren Brown, who was a great writer with the Chicago American in those days."[6]

Grange captained the Illini in 1925. After the young team lost three of its first four games, he was moved to quarterback and they won the final four games. Grange's greatest performance came on a muddy field against Pennsylvania before 65,000 spectators. He gained 363 yards on 36 carries, scoring three touchdowns, in a 24-2 victory.

Grange announced he was turning pro after C.C. Pyle, a Champaign, Illinois, theater owner and promoter, negotiated an elaborate deal with Chicago Bears owner and coach George Halas in which Grange was guaranteed a reported $3,000 per game and a varying percentage of the gate.

While 7,500 attended the Bears' last game before Grange made his debut, a standing-room only crowd of 36,000 filled Cubs Park (now known as Wrigley Field) on a snowy Thanksgiving in 1925 to see Grange's pro debut.

On December 6, 1925, more than 65,000 showed up at the Polo Grounds to watch Grange, setting an attendance record that stood for years. Grange scored a touchdown on a 35-yard interception return in the Bears' 19-7 victory. Offensively, he ran for 53 yards on 11 carries, caught a 23-yard pass and completed 2-of-3 passes for 32 yards.[7] Just a few weeks later, in January 1926, 75,000 people turned out in Los Angeles to watch Grange and the Bears.

Grange's success caught the attention of sportswriters like Grantland Rice, Westbrook Pegler, Damon Runyon, and Ford Frick. They began traveling with the Bears and their reports began to fan the flames of professional football popularity.

The following year Pyle wanted to buy a share of the Bears but he was denied and as a result he and Grange left to form their own league, the American Football League, to challenge the NFL. The league only lasted one season, after which Grange's team, the New York Yankees, was assimilated into the NFL.

In the third game of the 1927 season, Grange suffered a severe knee injury while playing against his old Bears team. As a result he lost some of his speed and his cutting ability. After sitting out 1928, Grange returned to the Bears, where he was still a solid runner but also became a valuable defensive back in the era of one-platoon football.

Grange's manager C.C. Pyle realized that as the greatest football star of his era, Grange could attract people to products and arranged endorsements for football dolls, soft drinks, a candy bar, and even a meat loaf.

Pyle also recognized his potential to attract moviegoers as well as sports fans. During his time as a professional football player, Grange starred in two silent films "One Minute to Play" (1926) and "Racing Romeo" (1927). Grange also starred in a 12-part serial called "The Galloping Ghost" in 1931. 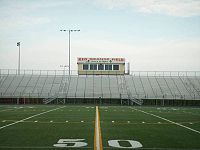 Grange Field at Wheaton Warrenville South High School, which was named in his honor.

Grange retired from professional football in 1934 but stayed on for several seasons as an assistant coach. In the 1940s and 1950s, Grange also became a successful radio and television sportscaster. He analyzed the Bears games for 14 years until 1963 and also covered college football games. Grange also achieved success in the insurance business, in real estate, and motivational speaking.

Grange married his wife Margaret, nicknamed Muggs, in 1941 and they were together until his death in 1991. She was a flight attendant, and they met on a plane. The couple had no children.[7]

Grange developed Parkinson's disease in his last year of life[7] and died on January 28, 1991 in Lake Wales, Florida.

His autobiography, first published in 1953, is titled The Red Grange Story. The book was written "as told to" Ira Morton, a syndicated newspaper columnist from Chicago.

In the 1950s, he visited Abington Senior High School (in Abington, Pennsylvania, a suburb of Philadelphia). Shortly thereafter, the school adopted his nickname for their mascot in his honor, the Galloping Ghost. Also, Wheaton Warrenville South High School's football field is named in his honor.

On January 15, 1978, at Super Bowl XII, Grange became the first person other than the game referee to toss the coin at a Super Bowl.

To commemorate college football's 100th anniversary in 1969, the Football Writers Association of America chose an all-time All-America team. Grange was the only unanimous choice.[7] Then in 1999, he was ranked number 80 on The Sporting News list of the 100 Greatest Football Players. In 2008, Grange was also ranked number one on ESPN's Top 25 Players In College Football History list.