Frederick John Perry (May 18, 1909 – February 2, 1995) was an English tennis player and three-time Wimbledon champion. He also carried Great Britain to four consecutive Davis Cup victories. He was the World No. 1 player for five years, four of them consecutive, from 1934-1938. The winner of eight Grand Slam titles, he is most famously remembered as the last British winner at Wimbledon.

As a young man coming from a working-class family, Perry was an unpopular player among tennis purists and fans. Tennis was a sport traditionally known as a gentleman's game, and Perry's brash behavior was viewed by many as disrespectful and arrogant. He took this poor reception in stride, though, refusing to suppress his genuine showman aptitude just for the sake of appeasing the tennis elite.

Over time, his name became more synonymous with the popular clothing brand that he founded, though his achievements in tennis have not been forgotten, as he is often cited as one of the greatest players in history.

Fred Perry was born in Stockport, Cheshire, England. His father, Sam, went on to develop a career in politics during the Co-operative movement, and was twice elected to the British House of Commons as a Labour Party member, in 1923 and 1929. As a child and teenager, Perry attended Ealing County School, where he developed an affection for table tennis. His budding talent and strong dedication to the sport eventually led to a world championship victory in 1928. It was after this victory, at age 18, that he stopped playing and devoted all his focus to a different sport, lawn tennis.

Perry developed his game with Pop Summers, who forced him to master the ability to hit the ball extraordinarily early after the bounce—a difficult task. Though this required months of practice, his proven speed and coordination as a table tennis player greatly helped him.

By 1933, Perry had won his first Grand Slam title at the U.S. Championships, defeating Australian Jack Crawford in five sets. He won eight Slam titles in total. By age 26, he was the first player to achieve the Career Grand Slam, having won all four Grand Slam singles titles, though not all in the same calendar year. He is famously remembered as the last British player to win the Wimbledon men's singles title, winning it three times in a row, from 1934-1936. His 1935 victory is significant, because it was the first successful Wimbledon title defense since the abolition of the Challenge Round in 1922. Previously, the defending champion did not have to play until the final round.

In 1933, Perry also helped lead his team to victory over France in the Davis Cup, which earned Great Britain the title for the first time in 21 years. With Perry, the country won the Cup for the next three consecutive years.

After three years as the World No. 1 player while still an amateur, Perry turned professional in 1937. For the next two years, he played lengthy tours against the powerful American player Ellsworth Vines, including 61 matches in the United States, with Vines winning 32 and Perry 29, and nine matches in England, with Perry winning six. They finished the year tied at 35 victories each. Most observers at the time considered Perry to be the World No. 1 for the fourth year in a row, sharing the title, however, with both Vines and the amateur Don Budge. The following year, 1938, the tour was even longer, and this time Vines beat Perry 49 matches to 35. Budge, winner of the amateur Grand Slam, was clearly the World No. 1 player. In 1939, Budge turned professional and played a series of matches against both Vines and Perry, beating Vines 21 times to 18 and dominating Perry by 18 victories to 11.

In the late 1940s, Perry was approached by Tibby Wegner, an Austrian footballer who thought a sweatband bearing Perry's name could be a marketing gem. Together, they redesigned the product with lighter and softer material than Perry was using previously. The Fred Perry brand became publicized after Perry convinced fellow players to wear the sweatbands on court. Wegner's next idea was to produce a sports shirt made from white knitted cotton pique, with short sleeves and buttons down the front. Launched at Wimbledon in 1952, the Fred Perry polo shirt was an immediate success. The brand became best known for its laurel logo, which appears on the left breast of the tennis shirts. The laurel logo, based on the old Wimbledon symbol, was stitched into the fabric of the shirt instead of merely ironed on (as was the case with the crocodile logo of the competing Lacoste brand). On the tennis court, the Fred Perry range was sported by many legends, including Arthur Ashe, Billie Jean King, and Jimmy Connors.

The polo shirt was only available in white until the late 1950s when the mods picked up on it and demanded a more varied color palette. It was the shirt of choice for diverse groups of teenagers throughout the 1960s and 1970s, ranging from the skinheads to the Northern Soul scene and Manchester's very own "Perry Boys." Since its transcendence from mere sportswear to streetwear, the Fred Perry brand has had an enduring influence on British and international fashion.

After his playing career ended, Perry was a tennis announcer for both television and radio, and wrote for London newspapers. By 1938, he had become a U.S. citizen, and he served as a training officer with the United States Air Force during the Second World War.

Perry was inducted into the International Tennis Hall of Fame in Newport, Rhode Island in 1975. He is considered one of the greatest male players to have ever played the game. Kings of the Court, a video-tape documentary made in 1997 in conjunction with the International Tennis Hall of Fame, named Perry one of the ten greatest players of all time. The documentary only considered those players who played before the Open era of tennis that began in 1968, with the exception of Rod Laver, who spanned both eras.

In his 1979 autobiography, fellow tennis great Jack Kramer named Perry one of the six best players of all time.[1] Kramer recounted, "Whenever an opponent would make an especially good shot, Perry would cry out "very clevah." I never played Fred competitively, but I heard enough from other guys that that "very clevah" drove a lot of opponents crazy." He described Perry's reputation for being "an opportunist, a selfish and egotistical person," who "never gave a damn about professional tennis." This sentiment echoed the views of the tennis hierarchy during Perry's time, unable to accept the success of an ordinary man from the working class. 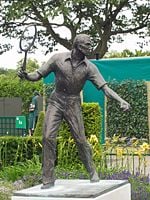 Despite his early unpopularity, Perry's enduring legend, as the last male British player to win Wimbledon, has made him Britain's most celebrated tennis player. In 1984, a statue of Fred Perry was erected inside the Church Road gate at the All England Lawn Tennis Club at Wimbledon, to commemorate the fiftieth anniversary of his first singles championship. The Somerset Road entrance to the Wimbledon grounds was also renamed the Fred Perry Gates. In his birthplace, a special 14–mile (23 km) walking route, Fred Perry Way, was built by the borough of Stockport and officially opened in September 2002.

In Fred Perry, An Autobiography, published in 1984, Perry wrote of his memorials: "There will be a few former members of the All England Club and the LTA revolving in their graves at the thought of such a tribute paid to the man they regarded as a rebel from the wrong side of the tennis tramlines." Never embraced by the highbrow tennis establishment during his own time, Perry relied on his own self-confidence and showmanlike spirit to find remarkable success.

During his life, he was married four times: in 1935, to American actress Helen Vinson; in 1941, to Sandra Breaux; in 1945, Lorraine Walsh; and in 1952, to Barbara Reis, with whom he had one daughter and whose son he adopted.

Retrieved from https://www.newworldencyclopedia.org/p/index.php?title=Fred_Perry&oldid=1081469
Categories:
Hidden category:
This page was last edited on 7 October 2022, at 23:40.
Content is available under Creative Commons Attribution/Share-Alike License; additional terms may apply. See Terms of Use for details.