Biblical criticism is a form of literary criticism that seeks to analyze the Bible through asking certain questions about the text, such as who wrote it, when it was written, for whom was it written, why was it written, what was the historical and cultural setting of the text, how well preserved is the original text, how unified is the text, how was the text transmitted over time, what is the text's literary genre, and how did it come to be accepted as part of the Bible?

Biblical criticism has been traditionally divided into textual criticism—also called lower criticism—which seeks to establish the original text out of the variant readings of ancient manuscripts; and source criticism—also called higher criticism—which focuses on identifying the author, date, sources, and place of writing for each book of the Bible. In the twentieth century a number of specific critical methodologies have been developed to address such questions in greater depth.

While biblical criticism generally treats the Bible as a human book rather than accepting it as the inspired Word of God, the tools of biblical criticism today are used both by skeptics and believers alike to better understand the scriptures and how they relate to people's spiritual lives.

Although questions about the sources and manuscripts of the Bible date back to ancient rabbinical and patristic times, Renaissance humanism and the Protestant Reformation laid the foundations for modern biblical criticism. The scientific revolution changed basic assumptions about how truth is perceived, emphasizing reason and experience over faith and the tradition; and the Reformation opened the way for individuals to interpret the scriptures with their own consciences as the final authority for the proper interpretation rather than church hierarchies. In the nineteenth century Old Testament scholars such as Jean Astruc, J.G. Eichhorn and Julius Wellhausen proposed dramatic new theories about the sources and editing of the Pentateuch; and New Testament experts such as Adolf von Harnack developed new theories about the historical significance of New Testament texts. In the twentieth century, theologians such as Rudolf Bultmann initiated form criticism, and archaeological discoveries, notably the Dead Sea Scrolls and the Nag Hammadi library, revolutionized biblical criticism. Folio from Papyrus 46, containing 2 Corinthians 11:33-12:9, one of the earliest New Testament manuscripts.

The so-called lower criticism is a branch of philology that is concerned with the identification of errors in biblical texts and manuscripts, as well as the comparison of various ancient texts. No original biblical texts exist today. What we have are copies of the original documents, with several generations of copyists intervening in most cases. Lower criticism was developed in an attempt to discover what the original text actually said. It has also become an essential tool of scholars engaged in "higher criticism."

When an error consists of something being left out, it is called a deletion. When something was added, it is called an interpolation. Biblical critics attempt to recognize interpolations by differences of style, theology, vocabulary, etc. When more than one ancient manuscript exists, they can also compare the manuscripts, sometimes discovering verses that have been added, deleted, or changed.

New Testament examples include comparisons of various ancient texts of the Gospels and epistles. Probable later additions to original text include:

Linguistic studies aid in discovering better translations, hidden meanings and puns, or probable copyist errors. For example, the word usually translated as "virgin" who will be "with child" in the prophecy of Isaiah 7:14 may be better rendered as "young woman," since the Hebrew term does not specify virginity. Similarly, the word "camel" in Jesus' saying that, "It is easier for a camel to go through the eye of a needle than for a rich man to enter the kingdom of God," (Mark 10:25) may actually involve a similarly-spelled word in Aramaic meaning "rope." 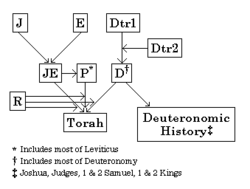 Diagram of the Documentary hypothesis shows the relationships among the various supposed sources of the Pentateuch.

Higher criticism is a name given to critical studies of the Bible that treat it as a text created by human beings at a particular historical time and for various human motives, in contrast with the treatment of the Bible as the inerrant word of God. Higher criticism thus studies the biblical text as it would study any other ancient text, in order to discover its cultural context, audience, purpose, influences, and ultimately its meaning.

The term "higher criticism" became popular in Europe from the mid-eighteenth century to the early twentieth century, to describe the work of such scholars as Jean Astruc, Johann Gottfried Eichhorn (1752-1827), Ferdinand Christian Baur (1792-1860), and Julius Wellhausen (1844-1918), who dealt with general theories regarding the sources, editing, and historical context of the Bible as opposed to dealing with the more detailed minutiae of textual criticism. Higher criticism was also at the heart of the historical Jesus movement, which finds its expression today in the Jesus Seminar.

Source criticism is one type of higher criticism, in which scholars seek to understand the possible components of the current texts, as well as what historical and cultural factors influenced their development. Just as they might see the influence of Christopher Marlowe or an Italian poet on one of Shakespeare's plays, so scholars have identified Canaanite or Babylonian influences on some of the literature of the Old Testament, and have developed various theories about the relationships of the Gospels to one another, among many other topics.

Two primary examples of source criticism are the Documentary hypothesis in Old Testament studies and the theory of the Q Document in New Testament studies. The Documentary hypothesis, also known as the Graf-Wellhausen theory, holds that the Pentateuch, or first five books of the Hebrew Bible, are not the work of Moses as traditionally claimed, but come from several later sources which were combined into their current form during the seventh century B.C.E. The Q Document was posited by New Testament scholars to explain the relations among the Synoptic Gospels. The most popular theory is that Mark was written first, with both Matthew and Luke using a "sayings" source, called "Q" to expand Mark's basic narrative.

Retrieved from https://www.newworldencyclopedia.org/p/index.php?title=Biblical_Criticism&oldid=1063347
Categories:
Hidden category:
This page was last edited on 21 January 2022, at 16:27.
Content is available under Creative Commons Attribution/Share-Alike License; additional terms may apply. See Terms of Use for details.