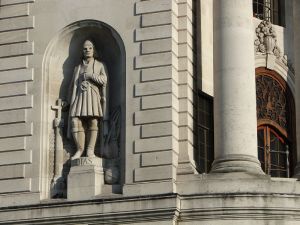 Statue of Dias at the High Commission of South Africa in London.

Bartolomeu Dias (Anglicized: Bartholomew Diaz) (c. 1450 – May 29, 1500), a Nobleman of the Royal Household, was a Portuguese explorer who sailed around the southernmost tip of Africa in 1488, the first European known to have done so. He named the what became known as the Cape of Good Hope "the Cape of storms." He helped to open up the route that Vasco da Gama would take to India, accompanying him part of the way. This subsequently opened up the East to trade and to European colonialism, although ironically since the Portuguese pioneered the route, it would be the British and the Dutch who would dominate imperial expansion East of the Cape. Until the building of the Suez Canal, this route would be the main channel of travel and communication West to East. However, in 1550, he was part of the cross-Atlantic expedition that resulted in Portugal claiming possession of its largest colony, Brazil.

Dias died at sea in 1550, in a storm off the Cape. Just over a century after, the Netherlands set up their Cape Colony, and shipping and trade with the East was developing into a major enterprise. This also launched the colonial project in the East. Those who believe that the human race is one family and that ultimately people will form a global community of peace and justice overcoming animosity and prejudice based on color, creed, race, or nationality recognize that this project had many negative aspects. On the other hand, the great voyages of exploration and the colonization process they helped to launch would also knit the human family into a single world community. The world of today that cherishes respect for all people and increasingly embraces responsibility for the welfare of all people and for the health and wholeness of the planet is in part at least the result of Bortolomeu Dias' voyage of 1488. Like many voyages of this era, this one changed the world. 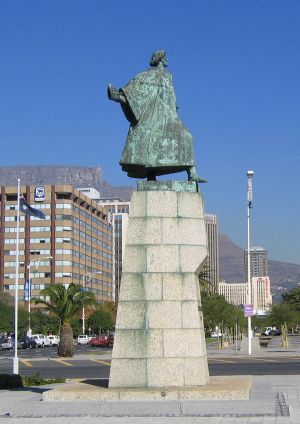 Dias was born into an aristocratic family in Lisbon, where his father was a cavalier of the royal court. The family is said to have had a sea-faring history. Dias was well educated, befitting his status, learning a number of languages and studying physics, geometry, mathematics, and astronomy in preparation for a career at sea. He was commissioned as Sailing Master of the Portuguese man-of-war Sao Cristovao (San Christovao) around about 1481. He was also superintendent of the royal warehouse.

Dias was married and had two children:

In 1481, Dias accompanied Diogo de Azambuja on an expedition to the Gold Coast. King John II of Portugal had appointed him on October 10, 1486, as the head of an expedition that was to endeavor to sail around the southern end of Africa in the hope of finding a trade route leading to Asia. Another important purpose of the expedition was to try to find the country of which recent reports had arrived through João Afonso de Aveiro and with which the Portuguese wished to enter into friendly relations.

Dias sailed, at first, towards the mouth of the Congo River, discovered the year before by Diogo Cão and Martin Behaim, then, following the African coast, he entered Walvis Bay. From 29° south latitude (Port Nolloth), he lost sight of the coast and was sailing south in a violent storm, which had lasted thirteen days. He did not know that he had sailed well beyond the tip of the continent. When calm weather returned, he sailed in an easterly direction and, when no land appeared, turned northward, landing at the "Baía dos Vaqueiros" (Mossel Bay) on March 12, 1488. Dias had rounded both the Cape of Good Hope and Cape Agulhas, the southernmost point of Africa without ever having been to them before.

Continuing east, he sailed as far as the Great Fish River. Once it had become clear that India could be reached by sailing north up the coast, he turned back. It was only on the return voyage that he discovered the Cape of Good Hope in May 1488. Dias returned to Lisbon, in December 1488, after an absence of sixteen months and seventeen days. He had explored a total of about 2,030 km of unknown African coast.

He originally named the Cape of Good Hope the "Cape of Storms" (Cabo das Tormentas). It was later renamed by King John II of Portugal as the Cape of Good Hope (Cabo da Boa Esperança) because of the opening of a route to the east. The discovery of the passage around Africa was significant because for the first time Europeans could trade directly with India and the other parts of Asia, bypassing the overland route through of the Middle East, with its expensive middle men. The official report of the expedition to the Cape of Good Hope has been lost.

It appears that the Portuguese took a decade-long break from Indian Ocean exploration after Dias' return. In that hiatus, it is likely that they got valuable information from a secret agent, Pêro da Covilhã, who had been sent overland to India and provided valuable information useful to their ocean navigators.[1]

In 1497, Dias was posted in São Jorge da Mina Castle and accompanied Vasco da Gama's expedition to India. He followed Gama with one ship to Cape Verde. He also accompanied Pedro Álvares Cabral on the voyage that resulted in the European discovery of Brazil in 1500. He died off the shore at the Cape of Good Hope when his vessel was wrecked in a storm.

In early 2008, Namdeb discovered an early sixteenth century wreck off the coast of Namibia. It was originally speculated that this might be the wreck of Dias' ship,[2] but the gold coins were identified as "Português" (also known as "Portugaloser") which were minted after 1525,[3] thus excluding the possibility of it being Dias' ship.

Charts created by Dias were utilized by later explorers sailing the Indian Ocean, such as Christopher Columbus and Vasco de Gama.[4]

Despite the gap between Dias's voyage and da Gama, there is little doubt that he played an important role in opening up navigation to the East. As a result of his voyages, the Cape would become an important staging-post on route to India, developing as a port and then as a European colony. Cape colony was founded by the Dutch East Indies Company in 1652. At this point in history, Europeans were full of curiosity about the world and intent on mapping it, exploring it and discovering what for them were new lands with opportunity to trade and perhaps establish colonial settlements. Since Christopher Columbus's 1492 voyage to the West had been sponsored by the Spanish, the Portuguese were anxious to open-up routes of their own. The 1500 voyage that "discovered" Brazil would give Portugal their biggest colonial possession.

On the one hand, the colonization process that resulted from these voyages of exploration ushered in an era of exploitation. Many indigenous people lost their land. Many cultures were damaged or destroyed. On the other hand, more people became aware that the world is the common home of the human race. The European exploration of Africa and of the Americas would also knit more and more people together, enabling cultural exchange and the creation of a world community of nations that increasingly realized that all share responsibility for the health and wholeness of the planet. The world as a global community, sharing belief in human rights, participating in the United Nations would not have developed if continents and islands had not first of all been incorporated into global systems, the first of which were the colonial empires that began from the fifteenth century onwards.

Retrieved from https://www.newworldencyclopedia.org/p/index.php?title=Bartolomeu_Dias&oldid=1094823
Categories:
Hidden category:
This page was last edited on 11 January 2023, at 04:38.
Content is available under Creative Commons Attribution/Share-Alike License; additional terms may apply. See Terms of Use for details.