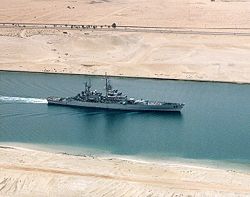 An American warship in the Suez Canal

The Suez Canal (Arabic: قناة السويس, Qanā al-Suways), is a large, artificial maritime canal in Egypt west of the Sinai Peninsula. It is 101 miles long and 984 feet wide at its narrowest point, running between Port Said on the Mediterranean Sea, and Suez (al-Suways) on the far northern shore of the Red Sea.

The canal allows two-way water transportation between Europe and Asia without circumnavigation of Africa. Before its opening in 1869, goods were sometimes offloaded from ships and carried over land between the Mediterranean and the Red Sea. The canal comprises two parts, north and south of the Great Bitter Lake, linking the Mediterranean Sea to the Gulf of Suez on the Red Sea.

If the Nile River is the "lifeblood of Egypt," then the Suez Canal is the Egypt's umbilical cord to the world. Some 7.5 percent of the world's sea trade travels the canal, as does most of Europe's oil. This strategic waterway has existed almost as long as Egyptian civilization, with digging going back to the pharaohs, followed by the Persians, and Ptolemy; even Napoleon saw its value. Many thousands were said to have died during its construction. Always a geopolitical flashpoint, international conflicts broke out at the canal in the 1950s and 1960s. Today, the Suez Canal remains a key short-cut for circumnavigation of the world. 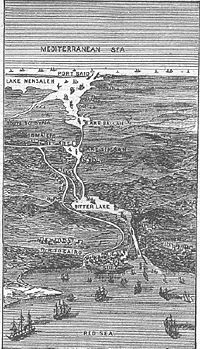 1881 drawing of the Suez Canal 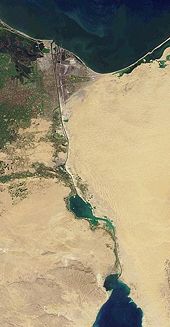 Suez Canal seen from space. The Wadi Tumilat is shown running west to east just above the Great Bitter Lake

Perhaps as early as the Twelfth Dynasty during the reign of Pharaoh Senusret III (1878 B.C.E. – 1839 B.C.E.), a west-east canal connecting the Red Sea to the Wadi Tumilat had been created. This early canal connected the sea to the easternmost of the seven arms of the Nile—thus allowing trade indirectly from the Mediterranean. Evidence indicates its certain existence by the thirteenth century B.C.E. during the time of Ramesses II.[1]

The west-east canal later fell into disrepair and according to the Greek historian Herodotus, Pharaoh Necho II undertook re-excavation about 600 B.C.E., but did not complete it. Repairs were finally completed by Darius I of Persia, who conquered Egypt. According to Herodotus, the completed canal was wide enough that two triremes could pass each other with oars extended, and required four days to traverse. Darius commemorated his achievement with a number of granite stelae that he set up on the Nile bank, including one near Kabret, 130 miles from Pie. One inscription reads:

Saith King Darius: "I am a Persian. Setting out from Persia, I conquered Egypt. I ordered this canal dug from the river called the Nile that flows in Egypt, to the sea that begins in Persia. When the canal had been dug as I ordered, ships went from Egypt through this canal to Persia, even as I intended."[2]

The west-east canal was again restored by Ptolemy II about 250 B.C.E. Over the next thousand years it was successively modified, destroyed, and rebuilt, until finally being put out of commission in the eighth century C.E. by the Abbasid caliph al-Mansur.

At the end of the eighteenth century C.E., Napoleon Bonaparte, while in Egypt, contemplated the construction of a canal to join the Mediterranean and Red Seas, using the basic route of the current canal. But this project was abandoned after a survey erroneously concluded that the Red Sea was 32.8 feet higher than the Mediterranean. This would require constructing a giant, locks-based canal and was much too expensive and would take too long to accomplish. 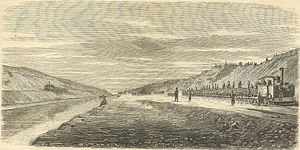 Construction of the canal

In 1854 and 1856, Ferdinand de Lesseps, a former French diplomat with friendly connections with Egyptian authorities, obtained a concession from Said Pasha, the Ottoman viceroy of Egypt, to create a company to construct a maritime canal open to ships of all nations, according to plans created by Austrian engineer Alois Negrelli. The company was to operate the canal by leasing the relevant land for 99 years from its opening, for navigation purposes only. The Suez Canal Company came into being on December 15, 1858.

The excavation took nearly 11 years, mostly through the forced labor of Egyptian workers—a form of labor which was not unique to the French, nor the British before them. Some sources estimate that over 30,000 people were forced to work on the canal, while others estimate that as many 120,000 people, both forced and hired laborers, died from the work.[3]

The British recognized the canal as an important trade route and perceived the French project as a direct menace to their geopolitical and financial interests. The British Empire was the major global naval force of this era, and its power had increased during the American Civil War. The British government officially condemned the forced labor and encouraged armed bedouins to start a revolt among workers. Involuntary labor on the project ceased, the viceroy soon condemned it as slavery, and the project was temporarily stopped.[4] 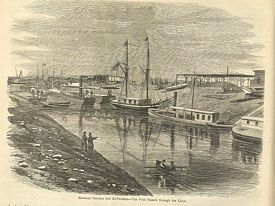 One of the first traverses in the nineteenth century

Angered by this intervention, de Lesseps sent a letter to the British government remarking on the British lack of remorse only a few years earlier when 80,000 Egyptian forced workers allegedly died in similar conditions while building a British railroad in Egypt.

At first, international opinion about the project was skeptical, and the Suez Canal Company shares did not sell well overseas. Britain, the United States, Austria, and Russia did not buy any shares. However, shares were quickly purchased in French markets.

The canal finally opened to traffic on November 17, 1869. Although numerous technical, political, and financial problems had been overcome, the final cost was more than double the original estimate.

The canal had an immediate and dramatic effect on world trade. Combined with the American transcontinental railroad completed six months earlier, it allowed the entire world to be circled in record time. It also played an important role in increasing European penetration and colonization of Africa. External debts forced Said Pasha's successor, Isma'il Pasha, to sell his country's share in the canal for $8 million to the United Kingdom in 1875. France, however, still remained the majority shareholder.

British troops moved in to protect the canal during a civil war in Egypt in 1882, and the Convention of Constantinople in 1888 declared the canal a neutral zone under the protection of the United Kingdom. Under the Anglo-Egyptian Treaty of 1936, the UK insisted on retaining control over the canal. However, after World War II, in 1951, Egypt repudiated the treaty, and by 1954 the UK had agreed to pull out.

Egyptian President Gamal Abdel Nasser nationalized the canal in 1956, after the UK and the United States withdrew their pledge to support the construction of the Aswan Dam. Nasser intended to finance the dam project using revenue from the canal. This provoked the week-long Suez Crisis, in which the UK, France, and Israel joined forces to invade Egypt. The threat of intervention on behalf of Egypt by the Soviet Union and pressure from Lester B. Pearson, then the prime minister of Canada, ended the crisis. For this, Pearson won the Nobel Peace Prize.

As a result of damage and sunken ships, the canal was closed until April 1957, when it had been cleared with United Nations assistance. A UN force (UNEF) was established to maintain the neutrality of the canal and the Sinai Peninsula.

The Suez Canal was closed by the 1967 Six-Day War when Israel victoriously fought [Egypt]], Syria, Jordan, and various Palestinianfactions. After the war, Israel declared that it would not give up Jerusalem and that it would hold other captured territories until significant progress had been made in Arab-Israeli relations. The end of active, conventional fighting was followed by frequent artillery duels along the frontiers and by clashes between Israelis and Palestinian guerrillas, which kept the Suez Canal closed.

In 1973, during the Yom Kippur War, the canal was the scene of a major crossing by the Egyptian army into Israeli-occupied Sinai. After this war, Egyptian and Syrian diplomatic relations with the United States, broken since the 1967 war, were resumed and the clearance of the Suez Canal began. The canal was finally opened again on June 5, 1975. 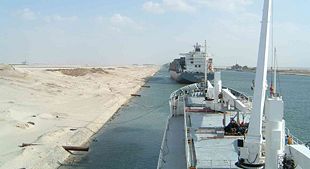 The canal has no locks because the terrain through which it passes is flat. Despite calculations made during Napoleon's time, the sea level at both ends is virtually the same. The canal allows the passage of ships of up to some 150,000 tons displacement, with cargo. It permits ships of up to 53 feet draft to pass, and improvements are planned to increase this to 72 feet by 2010 to allow supertanker passage. Presently, supertankers, weighing 200,000 dead weight tons and more, can offload part of their cargo onto a canal-owned boat and reload it onto a smaller tanker at the other end of the canal. These smaller tankers can offload their fuel at numerous ports around the world, unlike the supertanker, which has a limited number of facilities able to accommodate them.

Connections between the shores 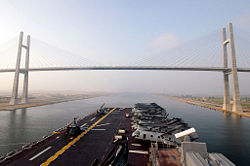 Listed from north to south, connections across the canal are:

A railway on the west bank runs parallel to the canal for its entire length.