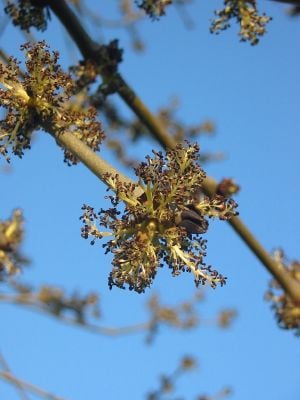 In botany, ash is the common name for any of various trees or shrubs of the genus Fraxinus of the flowering plant family Oleacea, characterized by usually opposite, pinnately compound leaves (Fraxinus anomala is an exception) and one-seeded, winged fruit. The term also is used for the wood of these plants.

Ashes offer various commercial, ornamental, and ecological values. The very strong and yet elastic wood of the ash is used extensively for materials demanding high strength and resilience, such as bows, tool handles, and baseball bats, and ash also is used for making guitars and office furniture. Particularly popular for timber are the white ash (Fraxinus americana) and the European ash (F. excelsior), while popular ornamental ashes include the red ash (Fraxinus pennsylvanica) and the flowering ash (F. ornus). The bark of various ashes are used in Traditional Chinese Medicine. Ecologically, ash trees and their fruit provide habitat and food for various animals, such as birds, squirrels, and insect larvae.

There are several other genera of trees in different families with representatives popularly known as ashes. In North America, the name "mountain ash" is applied to species of the genus Sorbus, and the name "Prickly ash" is applied to Zanthoxylum americanum and other Zanthoxylums, all in the family Rutaceae, the rue and citrus family. In Australia, many common eucalyptus species are called ash because they too produce hard, fine-grained timber. The best known of these is the mountain ash, Eucalyptus regnans, the tallest broadleaf tree in the world. However, "true ashes" belong to the Fraxinus genus.

The flowering plant family Oleaceae, to which Fraxinus belongs, is known the olive family. This botanical family contains 24 extant genera (and one extinct) of woody plants, including shrubs, trees, and vines. It is characterized by opposite leaves that may be simple or pinnately-compound. The calyx and corolla are four-lobed. Besides ash, other members of this family include the olive (Olea europaea), forsythia, lilacs, jasmines, privets, and fringetrees. The olive is highly valued for its fruit and the oil extracted from it, the ash for its tough wood, and the other mentioned plants have value as landscaping plants.

The ashes, genus Fraxinus, are usually medium to large trees and mostly deciduous though a few subtropical species are evergreen. The leaves are typically opposite (rarely in whorls of three), and mostly pinnately-compound, although simple in a few species.

The seeds of ashes, popularly known as keys, are a type of fruit known as a samara. A samara is a type of fruit in which a flattened wing of fibrous, papery tissue develops from the ovary wall. A samara is a simple dry fruit and indehiscent (not opening along a seam). The shape of a samara enables the wind to carry the seed away from the parent tree. While the seed can either be in the center of the wing, as in the elms, in the case of the ashes (and maples) the seed is on one side, with the wing extending to the other side, making the seed spiral as it falls, hence leading to the description "maple helicopters."

The tree's common English name goes back to the Old English æsc, a word also routinely used in Old English documents to refer to spears made of ash wood. 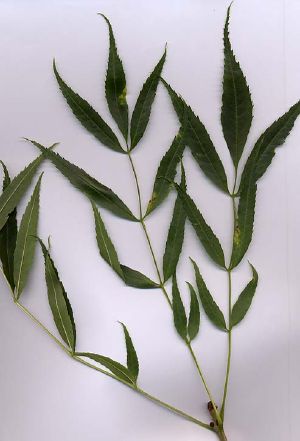 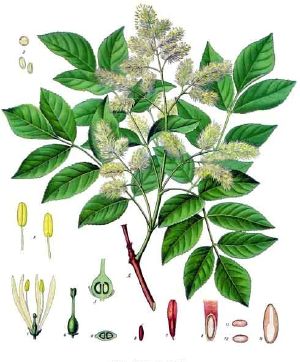 The wood of ash is hard (a hardwood), tough, and very strong, yet is elastic. As such, it is extensively used for making bows, tool handles, quality wooden baseball bats, hurley sticks, and other uses demanding high strength and resilience. It is also used as material for the bodies of guitars, known for its bright, cutting tone and sustaining quality. Ash veneers are extensively used in office furniture. The Black Ash is prized for making lightweight, durable split-ash baskets, by Native Americans, and it also makes excellent firewood.

The red ash (also known as the green ash) also is widely planted as a street tree in the United States. Other popular ornamental trees include the flowering ash (F. ornus) and the European ash.

The inner bark of the blue ash (Fraxinus quadrangulata) has been used as a source for a blue dye.

Ecologically, ash trees and their fruit provide habitat and food for various animals, such as birds and squirrels, and the larvae of some insects, such as Lepidoptera species, consume the leaves. There are also threats to ash trees from various insects. Notably, the emerald ash borer Agrilus planipennis, a wood-boring beetle, was accidentally introduced into North America from eastern Asia with ash wood products in about 1998. It has killed millions of trees in southeast Michigan, adjacent Ontario, and some isolated smaller areas on eastern North America. It threatens some 7 billion ash trees in North America.

There are various beliefs, legends, and myths surrounding the ash tree. In Norse mythology, the World Tree Yggdrasil is commonly held to be an ash tree, and the first man, Ask, was formed from an ash tree (the first woman was made from elm). Elsewhere in Europe, snakes were said to be repelled by ash leaves or a circle drawn by an ash branch. Irish folklore claims that shadows from an ash tree damage crops. In Cheshire, it is said that ash could be used to cure warts or rickets.

The ash is thought to exude a sugary substance that was fermented to create the Norse "Mead of Inspiration" (Dumont 1992).

Folklore held that a traditional cure for young children with hernias was to pass a child through the gap in an ash split down the middle and held open with wedges (Simpson and Roud 2000). This procedure often included many ritualistic aspects, such as being done by nine people on nine successive mornings from west to east, or done at midnight nine times (Simpson and Roud 2000).

A traditional Norse Christmas Yule (or Jul) log, intended to burn for many days, was of ash wood, sometimes known in England as the "Great Ashen Faggot" with its long burning believed to be helpful for the family's future prosperity (Melton 2001).

Retrieved from https://www.newworldencyclopedia.org/p/index.php?title=Ash_(tree)&oldid=678030
Categories:
Hidden category:
This page was last edited on 2 April 2008, at 02:35.
Content is available under Creative Commons Attribution/Share-Alike License; additional terms may apply. See Terms of Use for details.