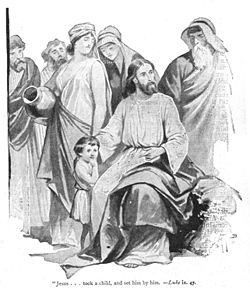 For Ritschl, the religion that Jesus lived in his daily life was more important than creeds or doctrines about Jesus.

Albrecht Ritschl (March 25, 1822 - March 20, 1889) was a German Lutheran theologian and one of the great teachers of the liberal Protestant tradition. He created a systematic theology that emphasized the moral nature of religion as opposed to doctrine, following Kant's view of religion. He also stressed the religion practiced by Jesus himself as distinct from teachings about Jesus, such as the Trinity and the Incarnation.

Ritschl was for many people the epitome of Protestant liberalism, living at a time when historical criticism of the Bible made great advances and the Christian church had to cope with the problems of industrialization and a potentially revolutionary proletariat. For many years he was the most renowned theologian in Europe, and the so-called "Ritschlian era" of 40 years between the publication of the third volume of his major work The Christian Doctrine of Justification and Reconciliation (1874) and the outbreak of World War I (1914) dominated German theology. His influence still continues to be felt today.

Although Ritschl has not been without critics, his efforts to reach the original New Testament message of the religion of Jesus, by following Kant's moral way of integrating between Pietism (theism) and the Enlightenment (humanism), are commendable.

Ritschl was born in Berlin. His father, Georg Karl Benjamin Ritschl (1783-1858), became the pastor of the Church of St. Mary in Berlin 1810, and from 1827 to 1854 was general superintendent and Evangelical bishop of Pomerania. Albrecht thus grew up in an atmosphere dominated by the spirit of the Lutheran Church, which stressed the centrality of family morality and Reformation spirituality. Fellowship with God, trust in divine providence, patience, and cheerful moral striving were hallmarks of his childhood education.

By the age of 17, Ritschl was urgently committed to a theological vocation. He studied at Bonn, Halle, Heidelberg, and Tübingen. At Halle he came under Hegelian influences, especially that of the church historian F.C. Bauer. He wrote on the relationship between the teachings of the heretic Marcion and the Gospel of Luke in 1841, and his most important work of this period is considered to be his book Die Entstehung der altkatholischen Kirche (The Origin of the Old Catholic Church) in 1850. Old Auditorium at the University of Göttingen

During the period in which he was professor of theology at Bonn from 1852-1864, however, he abandoned Hegelianism in favor of Kantianism and the theology of Schleiermacher. In 1864 he moved to the University of Göttingen, where he associated with R.H. Lotze, an early exponent of "value philosophy," getting even closer to Kantianism. At Göttingen, Ritschl's reputation as a great teacher was established, attracting a notable group of disciples who themselves went on to became influential teachers, among them Julius Kaftan and Adolf Harnack. During this time Ritschl wrote a three-volume work Die Christliche Lehre von der Rechtfertigung und Versöhnung (The Christian Doctrine of Justification and Reconciliation), published during the years 1870-1874. This monumental work contains his basic theological views and is considered a classic of systematic theology. In 1882-1886 he wrote a major history of Pietism (Die Geschichte des Pietismus). Here, he argued against Pietism's emphasis on individual righteousness, stressing instead the idea of moral development in the context of community.

Ritschl tried to carry forward the "unfinished Reformation" of the sixteenth century,[1] by clarifying what he thought to be the genuine ideas of the Reformation and also by salvaging the original New Testament message from Protestant orthodoxy's distortions and also from the later confusions created by various schools such as Enlightenment, Pietism, Schleiermacher's theology, and Hegelianism. For Ritschl, religion is entirely a practical matter. It is neither subjective feeling, as with Schleiermacher, nor speculative knowledge, as with Hegel. Nor does it have anything to do with Protestant orthodoxy's dogmatism, the Enlightenment's humanistic rationalism, or Pietism's emotionalism. Ritschl's project, therefore, was a reconstruction of theology in an Kantian way. It followed Kant's approach of synthesis between Pietism (theism) and the Enlightenment (humanism) through their moral commonality: mature moral autonomy of the self. However, it was not a complete copy of Kant. It did not subordinate religion to morality as Kant did in terms of the categorical imperative. For Ritschl, religion still has its genuine objectives and incentives such as justification and reconciliation for the kingdom of God on earth.

Accepting Kant's criticism of the claims of "pure reason" and recognizing the value of morally conditioned knowledge, Ritschl favored "practical reason" and held that religion must not be reduced to a speculate science. In other words, true religion is not about abstract ideas or rigorous intellectual constructs, but about moral values. Value judgments, which morally judge things through their qualities and valuable effects on us, are at the very core of both religion and theology. So, God's existence, for example, cannot be known except through value judgments, i.e., except through the moral effects of God on us: "Apart from this value-judgment of faith, there exists no knowledge of God worthy of this content."[2] Thus, the traditional ontological, cosmological, and teleological arguments for God's existence do not work. Also, true Christianity is not about creeds and dogmas such as the attributes of God, the nature of the Trinity, or the definition of the "two natures" (divine and human) of Christ. A new theology must be promulgated dealing with the practical moral realities experienced by Christians: the ethics of the kingdom of God. For Ritschl, the goal was a "theology without metaphysics."

According to Ritschl, even the historical Jesus cannot be truly understood except through value judgments. We can never know who he was through the bare facts of the original Jesus deprived of the effects he has produced upon members of the Christian community both in the past and present. So, historical positivism does not work, while at the same time any idealized view of Jesus that subjectively neglects history does not work, either. In the life and work of Jesus, as understood through value judgments, God revealed himself most fully. By calling God "Father," Jesus showed that God is personal and has both love and will. God thus cares for humans as his children. The fulfillment of God's will is the realization of his kingdom, as demonstrated by Jesus in the Lord's prayer: "Thy kingdom come, Thy will be done on earth as it is in heaven." Ritschl insisted that Christians must return to the religion "of" Jesus, not the religion "about" Jesus which evolved after his death. Emphasizing Jesus' moral example rather than his divinity per se, Ritschl denied the doctrine of the Virgin Birth and the Incarnation. Yet, he believed that Jesus perfectly revealed God to humans.

Ritschl also criticized the traditional doctrine of original sin. He held that we should not compare our own moral standing to a theoretical ideal of Adam before the Fall, but to the practical ethical example shown by Jesus, the "second Adam." Sin, which Ritschl defined as a break in our relationship with God, results not from fallen nature or the influence of the devil, but from ignorance. The work of Christ has two things: justification (the forgiveness of sin) and reconciliation (new life in fellowship with God). They are inseparable from each other in that they both have the personal involvement of the believer. We have benefited this redemptive work of Christ because God was active in Christ, who in turn showed unbroken trust in him on the cross. This constitutes a version of the so-called "moral influence theory" of redemption.

The essence of Ritschl's work is systematic theology. Yet he believed this is not the work of trained theologians alone, for it is easily perceived in the knowledge of the historical Jesus revealed to the community. By following Jesus' example and living a truly moral life, even the simplest Christian is behaving theologically. His bold religious positivism showed that spiritual experience, understood as a morally lived life, is absolutely real. A life of trust in God is a fact, not so much to be explained as to explain everything else.

Ritschl's teachings challenged theological conservatism by emphasizing moral experience over theological correctness. His theory of salvation stressed the importance of moral effects Christ produced on believers through the cross. Thus, Ritschl made Christianity a faith to be lived in one's moral and community life rather than through metaphysical speculation or church ritual. While mainstream Protestant theology did not go as far as Ritschl did in rejecting traditional theological ideas, his influence as a theologian was unequaled in his day and his work made a profound impression on, and gave a new confidence to, Protestant thought in Germany. The publication of his major work The Christian Doctrine of Justification and Reconciliation, especially of its third volume in 1874, marked the beginning of the "Ritschlian era" that dominated German theology through World War I. His positive theology was severely challenged by humanity's tragic experiences of the horrors of the two World Wars, but ideas that he boldly pioneered are now commonplace. His contribution to systematic theology and his basic proposition—that Christianity is to be lived through a moral commitment to realize God's kingdom in community—make him one of giants of modern theology, whose influence continues to be felt today.

The theology of Ritschl is often critiqued for its Kantian bias. But, understanding the historical significance of Kant can perhaps explain why the theology of Ritschl was influential and still continues to be so today. Kant, given the impasse of a conflict between the different schools of thought such as Pietism and the Enlightenment in the eighteenth century, decided that religion is morality based on practical reason, and his decision constituted a significant breakthrough because it was able to synthesize Pietism (theism) and the Enlightenment (humanism) by referring to moral autonomy within the human self as their commonality. "With Kant only" the eighteenth century came to "an understanding of itself—but of itself in its limitations," and in this sense he stood "at the turning-point of his age."[3] Ritschl, aware of the importance of this Kantian divine-human synthesis on the ground of morality, used it to carry forward the "unfinished Reformation." Although many critics including Karl Barth have argued that this Kantian/Ritschlian synthesis failed because it eventually ended up breaking the balance of synthesis, leaning more toward humanism, the original intention of Ritschl for this kind of synthesis needs to be much appreciated.

Retrieved from https://www.newworldencyclopedia.org/p/index.php?title=Albrecht_Ritschl&oldid=1018332
Categories:
Hidden category:
This page was last edited on 18 February 2019, at 21:02.
Content is available under Creative Commons Attribution/Share-Alike License; additional terms may apply. See Terms of Use for details.