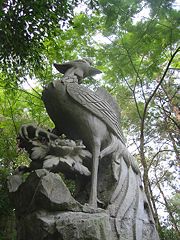 Feng-Huang (Chinese: 鳳凰; Pinyin: Fènghuáng; Japanese: 鳳凰 hō-ō; Korean: 봉황 bonghwang; Vietnamese: Phượng Hoàng) is the name of two Chinese mythological birds that were central figures in ancient Chinese cosmology. Sometimes called the Chinese Phoenix, the Feng-Huang is a symbol of summer and spiritual balance, and along with the dragon, qilin and tortoise, is one of the most highly revered creatures in Chinese tradition. Its appearance is said to indicate some great event, or to bear testimony to the greatness of a ruler.

Often viewed as the sacred union of male and female, Feng being male and Huang female, the Feng-Huang can also be regarded as a female entity in relation with the male dragon. Thus, images of the Feng-Huang and dragon together can represent conflict or marital harmony.

Beautiful, graceful, loyal, and honest, the Feng-Huang represents all the virtues, calling us to a higher level of life, filled with justice, peace, prosperity, and faith. Such symbolism needs no physical counterpart; the Feng-Huang already has the best of this world in its imagery. It is up to humankind to manifest these virtues substantially on the earth. 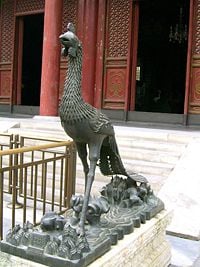 While it is depicted as one being, Feng-Huang is actually a composite of one male and one female bird. The Feng is the male, and the Huang is the female, although both sexes are depicted the same. (Modern tradition combined the Feng-Huang into one bird.)

The Feng-Huang is said to be made up of the beak of a cockerel, the face of a swallow, the forehead of a fowl, the neck of a snake, the breast of a goose, the back of a tortoise, the hindquarters of a stag and the tail of a fish. Its body symbolizes the six celestial bodies. The head is the sky, the eyes are the sun, the back is the moon, the wings are the wind, the feet are the earth, and the tail is the planets. Its feathers contain the five fundamental colors: black, white, red, blue, and yellow.

Did you know?
Unlike the Phoenix of the Western World, the Feng-Huang is immortal without needing to go through a cycle of death and re-birth.

Unlike the Phoenix of the Western World, the Feng-Huang is immortal without needing to go through a cycle of death and re-birth. The bird is attracted to music and nests high in the K'unlun Mountain range.[1]

This sacred creature never kills. It eats only plants, never even eating living insects. It never spoils plants without reason, living on paulownia trees, its natural habitat, and eating only bamboo seed.[2]

The appearance of the Feng-Huang in Chinese culture dates to around the third millennium B.C.E., right before the death of the Yellow Emperor.[3] According to legend, the Feng-Huang appears very rarely, and only to mark the beginning of a new era, hiding during times of trouble. It may appear in peaceful, prosperous times, or at the birth of a virtuous ruler. As the herald of a new age, the bird descends from heaven to earth, marking the beginning of a time of prosperity. Once a new monarch had taken over, the bird came to symbolize an era of peace and prosperity, with a new, benign emperor, and was often used as a symbol of the Empress.

The Feng-Huang is an integral in the ancient cosmology of China, which stated that the world and Heavens were created by the four Si-Ling creatures, the dragon, qilin, tortoise, and Feng-Huang. Once the world was then divided up into four quarters, and the Feng-Huang was given dominion over the Southern Heaven quadrant, which symbolizes Summer. The Feng-Huang and the dragon are often shown together, either as mortal enemies or a blissful lovers.[4]

The Feng-Huang over the years has been seen as a symbol of power, prosperity, grace, and virtue. The witnessing of Feng-Huang is regarded as a very good omen, signifying the beginning of a new era in history. It is said that "they only appear in lands that are blessed with peace, prosperity, and happiness – they flee to the heavens during times of trouble."[5] The spreading of its wings exhibits virtue to whoever witnesses it. It signifies divine beauty, teaching all to do the right thing, standing for humanity and justice, and arousing faith in all who see it.

The Feng-Huang was at times seen as the sacred symbolic joining of male and female, commonly seen as the Yin-Yang symbol. The Yin is female, the Yang male, and when combined, such as in the combination of Feng and Huang, it is representative of opposite forces meeting into a union that produces harmony and balance.

In the Royal courts, the Feng-Huang came to be seen as a representation of the sacred female, and thenceforth the Empress, while the Emperor was represented by the dragon, and artwork often depicted the dragon chasing the Feng-Huang, or of the two beasts coupled together. This image is often the one that is most widely seen today, but it should be noted that the Feng-Huang itself also symbolizes the union of man and woman.[6]

The Feng-Huang was believed to control the five tones of Chinese music, and to represent the Confucian virtues of loyalty, honesty, decorum, and justice.[4] When used to decorate a house, the Feng-Huang showed that the people who lived there were honest and loyal. 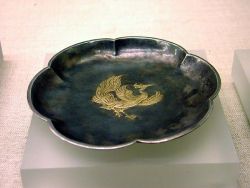 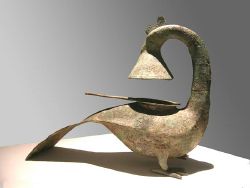 Bronze lamp in the shape of feng-huang, National Museum of China, Beijing.

The Feng-huang was used in Chinese artwork for hundreds of years. When used as a household decoration it usually meant that the occupants of that house were honest people and could be considered loyal to their family and friends. It was often carved in jade, as ornaments to be worn or good-luck totems. People that wore the jewelry of the Feng-huang were regarded as being highly moral, and thus only a select few were actually permitted to posses such jewelry.[6]

Eventually the bird was also seen on tombs and graves, marking those dead as having been virtuous in life. Paintings and mural depictions of the feng-huang often showed it in battle with the snake, its natural enemy, or in conjunction with the three other divine mythical creatures of ancient Chinese mythology.