For humans today, tortoises mainly add to the wonder of nature, being popular attractions for ecotours or in zoos, and well-known for their unique forms and behaviors. However, for sailors of the seventeenth to ninteenth centuries, tortoises were an important source of meat. Turned on their back where they could not move, the Galápagos tortoise could survive for months without food or water, making them a good source of fresh meat on a whaling ship (before refrigeration). However, overexploitation, combined with habitat destruction, has resulted in serious treats to their survival, with some populations becoming extinct on particular islands. As many as 250,000 tortoises inhabited the Galapagos Islands when they were discovered. Today, only about 15,000 are left (according to estimates by the Charles Darwin Foundation and Galapagos National Park Service), mainly due to harvest by whalers and pirates that killed them for food during the eighteenth and nineteenth centuries.

Tortoise and terrapin are the names for two sub-groups commonly recognized within Testudines. Tortoise is the common name for any land-dwelling turtle, especially those belonging to the family Testudinidae. Terrapin is the common name for large freshwater or brackish water turtles belonging to the family Emydidae, especially the genus Malaclemys, and sometimes the genus Pseudemys (or Chrysemys).

The word "turtle" is widely used to describe all members of the order Testudines. However, it is also common to see certain members described as terrapins, tortoises, or sea turtles as well. Precisely how these alternative names are used, if at all, depends on the type of English being used.

To avoid confusion, the word "chelonian" is popular among veterinarians, scientists, and conservationists working with these animals as a catch-all name for any member of the order Testudines. It is based on the Ancient Greek word χελώνη (chelone, modern Greek χελώνα), meaning tortoise.

Tortoise is used in this article as the common name for members of the family Testudinidae. Like their marine cousins, the sea turtles, members of Testudinidae are shielded from predators by a shell. The top part of the shell is the carapace, the underside is the plastron, and the two are connected by the bridge. The tortoise has both an endoskeleton and an exoskeleton.

Tortoises can vary in size from a few centimeters to two meters in length. The well-known giant tortoises of the Galapagos islands (Geochelone nigra), known as the Galápagos tortoise or Galápagos giant tortoise, is the largest living tortoise, endemic to nine islands of the Galápagos archipelago. Adults can weigh over 300 kilograms (660lb) and measure 1.3 meters (4.3 ft) long. Although the maximum life expectancy of a wild tortoise is unknown, the average life expectancy is estimated to be 200 years.

Tortoises tend to be diurnal animals with tendencies to be crepuscular depending on the ambient temperatures. They are generally reclusive and shy.

Giant tortoises of the genera Geochelone, Meiolania, and others were relatively widely distributed around the world into prehistoric times, and are known to have existed in North and South America, Australia, and Africa. They became extinct at the same time as the appearance of humans, and it is assumed that humans hunted them for food. The only surviving giant tortoises are on the Seychelles and Galápagos Islands.

Many, though not all, species of tortoises are sexually dimorphic, though the differences between males and females vary from species to species. In some species, males have a longer, more protruding neck plate than their female counterparts, while in others the claws are longer on the females.

In most tortoise species the female tends to be larger than the male. Some believe that males grow quicker, while the female grows slower but larger. The male also has a plastron that is curved inwards to aid reproduction. The easiest way to determine the sex of a tortoise is to look at the tail. The females, as a general rule have a smaller tail which is dropped down whereas the males have a much longer tail which is usually pulled up and to the side of the rear shell. 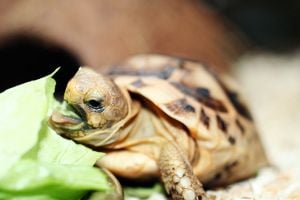 A baby tortoise feeding on lettuce.

Most land-based tortoises are herbivore, grazing on grasses, leaves, flowers, cacti, and certain fruits. For some, their main diet consists of alfalfa, clover, dandelions, and leafy weeds, although they will also eat various insects. For the Galapagos tortoise, fresh young grass is a particular favorite food, and others include the poison apple (Hippomane mancinella), which is highly poisonous to humans, the endemic guava (Psidium galapageium), the water fern (Azolla microphylla), and the bromeliad (Tillandsia insularis). 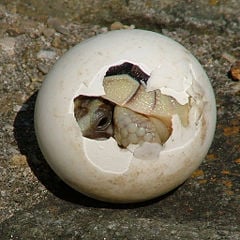 A baby Testudo marginata emerges from its shell

Female tortoises dig burrows in which they lay from two to twelve eggs. Hatchlings take approximately 90-120 days to incubate within the ping-pong-ball-sized eggs. Upon completion of the incubation period the hatchlings break open the egg shell enclosure with their beak and dig their way to the surface.

Most hatchlings are born with an embryonic egg sac, which serves as a source of food until they are capable of eating solid foods. For some species, this stage may last between 3 and 7 days. Unlike many other turtles, hatchlings of most tortoise species will move from their nest and into their mother's burrow following birth. The mother will usually provide protection for the hatchlings for around 80 days, after which the babies will attempt to survive on their own.

There are many old wives tales about the age of turtles and tortoises, one of which being that the age of a tortoise can be deducted by counting the number of concentric rings on its carapace, much like the cross-section of a tree. This is, of course, not true, since the growth of a tortoise depends highly on the access of food and water. A tortoise that has access to plenty of forage (or is regularly fed by its owner) will grow faster than a desert tortoise that goes days without eating.

Tortoises generally have lifespans comparable with those of human beings, and some individuals are known to have lived longer than 150 years. Because of this, they symbolize longevity in some cultures, such as China. The oldest tortoise ever recorded, almost the oldest individual animal ever recorded, was Tui Malila, who was presented to the Tongan royal family by the British explorer Captain Cook shortly after its birth in 1777. Tui Malila remained in the care of the Tongan royal family until its death by natural causes on May 19, 1965. This means that upon its death, Tui Malila was 188 years old (AP 2006). The record for the known longest-lived vertebrate is succeeded only by one other, a Koi fish named "Hanako" whose death on July 17, 1977 ended a 226 year life span. 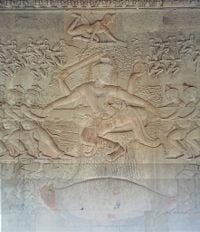 The bas-relief from Angkor Wat, Cambodia, shows Samudra manthan-Vishnu in the centre, his turtle avatar Kurma below, asuras and devas to left and right.

In Hinduism, Kurma (Sanskrit: कुर्म) was the second avatar of Vishnu. Vishnu took the form of a half-man half-tortoise, the lower half being a tortoise. He is normally shown as having four arms. He sat on the bottom of the ocean after the Great Flood. A mountain was placed on his back by the other gods so that they could churn the sea and find the ancient treasures of the Vedic peoples.

The long life of tortoises have led to them being portrayed as symbols of longevity.

Tortoises are popular attractions for ecotourists in some areas, most notably the Galapagos Islands. In addition, some are kept as pets. They are difficult to captive breed, so many are wild caught. Tortoises need outdoor space to roam. Feeding tortoises cat or dog food is a common mistake, as both cat and dog food contain too much protein and lack other important nutrients for tortoises. Tortoises are not carnivores, and should not be fed large amounts of protein, as it may cause shell deformation and other medical problems.

The following species list largely follows Ernst & Barbour (1989). However, the newly erected genera Astrochelys, Chelonoidis and Stigmochelys have been retained within Geochelone. 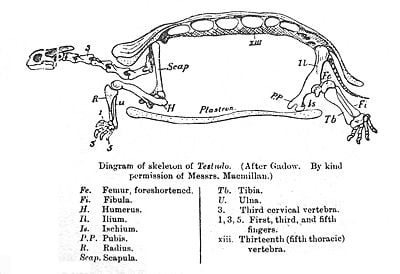 Skeleton of a tortoise