Koi is any of the ornamental, domesticated varieties of the common carp, Cyprinus carpio, of the Cyprinidae family, a freshwater fish characterized by a forked caudal (tail) fin, barbels, and a wide variation in color and patterns, from solid to multicolored, and from dull gray, black, and white, to red, yellow, orange, blue, and metallic (gold and silver) colors. Koi (鯉, Koi) is known as nishikigoi (錦鯉, nishikigoi) in Japanese, meaning "brocaded carp" or "colored Koi."

Koi is one of the world's most popular freshwater, ornamental fish. These "living jewels" are known for their beauty, brilliant colors, ease of care, longevity, and ability to adapt to most pond environments. In Japan, they have been a symbol of strength, prosperity, and good luck. They reflect the human ability to develop over time new varieties from the rich variability inherent in nature. 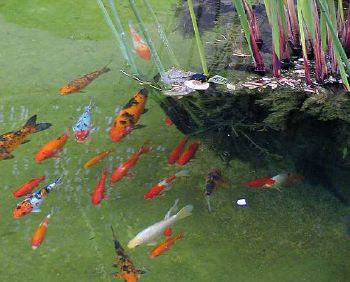 A group of several varieties of koi

Koi is a type of carp, which is the common name for various freshwater fish within the family Cyprinidae. Members of the Cyprinidae are characterized by pharyngeal teeth in one or two rows, with no more than eight teeth per row; usually thin lips, an upper jaw usually protrusible; and an upper jaw bordered only by premaxilla (Nelson 1994).

Koi is a domesticated variety of the common carp or European carp (Cyprinus carpio), having been selectively bred for their color and patterns (Blasiola and Earle-Bridges 2005). As with all carp, they are a freshwater species and typically a bottom-feeder, although they are capable of feeding at all levels.

Koi have a large dorsal tail fin, a forked caudal fin, a single anal fin, and barbels. Although they typically have a large number of small scales, some have a smaller number of large scales, and some are bred to be scaleless. All lack scales on their heads. They reach sizes of greater than 1 meter (3 feet) and 11 kilograms (25 pounds), and some have been known to live longer than 40 years. Their colors come from chromatophores in their dermal cells, which include carotenoids (imparting colors such as yellows and reds) and melanin (which imparts black). Some varieties of domesticated carp also have iridocytes with guanine crystals that can give a silver or gold metallic appearance (Blasiola and Earle-Bridges 2005).

The word "koi" comes from Japanese, simply meaning "carp." It includes both the dull gray fish and the brightly colored varieties. A homophone of koi means "love, affection" and koi are therefore symbols of love and friendship in Japan.

The common carp is widely believed to have originated from the Caspian Sea with natural habitat surrounding the North, Baltic, Mediterranean, Black, Azov, Caspian, and Aral Sea basins. The common carp, as a food fish with the ability to survive and adapt to many different climates and waterways, was bartered and spread to many different areas, including North America, Africa, Europe, and Asia. Wild populations of the common carp now exist in those four continents and South America.

Natural color mutations of these carp would have occurred across all populations. Historical records indicate that carp with color mutations were found in China. However, the earliest records of carp with distinct colors kept for selective breeding, true Nishikigoi, have been found in Japan. Depictions of carp or "koi" with different color variations have been found on eighteenth century Japanese drawings and paintings. The ornamental cultivation of carp originated in the Niigata region of Japan during the Japanese Edo Period (KF 2006).

Koi breeding originated in the eighteenth century in the Niigata prefecture of Japan. Farmers working the rice fields would notice that some carp were more brightly colored than others, capture them, and raise them. By the twentieth century, a number of color patterns had been established, most notably the red-and-white Kohaku. The outside world did not become aware of the degree of development until 1914, when the Niigata koi were exhibited in the annual exposition in Tokyo. At that point, interest in koi exploded throughout Japan. The hobby of keeping koi spread worldwide after plastic bags and shipping of koi became both fast and safe for the fish. These factors enabled koi to be shipped worldwide with low mortality rates. Koi are now commonly sold in most pet stores, with higher-quality fish available from specialist dealers.

Koi varieties are distinguished by coloration, patterning, and scalation. Ghost koi, developed in the 1980s, are metallic hybrids of wild carp. They and ogon koi are not considered true Nishikigoi, but are considered here. Butterfly koi, also known as longfin koi or dragon carp, were also developed in the 1980s and are notable for their long and flowing fins. They are actually hybrids with Asian carp and, like ghost koi, are not considered true Nishikigoi.

Koi have many different colors. Some of the major colors are white, black, red, yellow, blue, and cream.

While possible variations are limitless, breeders have identified and named a number of specific categories. The most popular category is Gosanke. The Gosanke category is made up of the Kohaku, Taisho Sanshoku, and Showa Sanshoku varieties. The Japanese breeders have many generations of knowledge and experience when it comes to breeding and raising Nishikigoi. They know which ones will be worth hundreds of dollars and which ones will be worth thousands of dollars.

The major named varieties include: 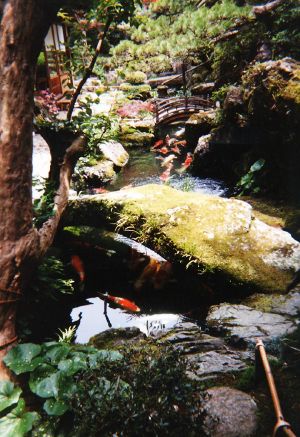 Like most fish, koi reproduce through spawning in which a female lays a vast number of eggs and one or more males fertilize them. Nurturing the resulting offspring (referred to as "fry") is a tricky and tedious job, usually done only by professionals. Although a koi breeder may carefully select the parents they wish based on their desired characteristics, the resulting fry will nonetheless exhibit a wide range of color and quality.

Unlike a purebred dog or cat, even the finest champion-grade koi will produce literally thousands of unacceptable, unrecognizable, or even genetically defective offspring in a single spawning. These (and hundreds of marginal offspring) are culled at various stages based on the breeder's expert eye and closely guarded techniques.

Culled fry are usually destroyed (perhaps fed to other fish) and older culls are often sold as lower-grade "pond-quality" koi within their first year (also called "Tosai") at 3 to 6 inches long. The semi-randomized result of the koi's reproductive process is both a blessing and a curse. While it requires diligent oversight to narrow down the favorable result that the breeder wanted all along, it also made possible the gradual transformation of wild river carp into the exquisite art form seen in modern nishikigoi.

The common carp is a hardy fish, and koi retain that durability. Koi are cold-water fish, but benefit from being kept in the 15-25 degrees C range and do not react well to long cold winter temperatures, their immune system "turning off" below 10 degrees C. Koi ponds have a meter or more of depth in areas of the world that become warm during the summer. In areas that have harsh winters, ponds that are a minimum of 1.5 meters (4 1/2 feet) are most common.

Koi's bright colors put them at a severe disadvantage against predators; a white-skinned Kohaku is a visual dinner bell against the dark green of a pond. Herons, kingfishers, raccoons, cats, foxes, and badgers are all capable of emptying a pond of its fish. A well-designed outdoor pond will have areas too deep for herons to stand in, overhangs high enough above the water that mammals cannot reach in, and shade trees overhead to block the view of aerial passers-by. It may prove necessary to string nets or wires above the surface. A pond usually includes a pump and filtration system to keep the water clear.

Koi are an omnivorous fish and will often eat a wide variety of foods, including water plants, worms, insects, and can be fed vegetables as well (peas, lettuce, and watermelons). Koi food is designed not only to be nutritionally balanced, but also to float so as to encourage them to come to the surface. Koi will gather around the person feeding them and can be trained to take food from one's hand. When they are eating, it is possible to observe koi for parasites and ulcers. In the winter, their digestive system slows nearly to a halt, and they eat very little, perhaps no more than nibbles of algae from the bottom. Their appetite will not come back until the water becomes warm in the spring. When the temperature drops below 50 degrees Fahrenheit (10 °C), feeding, particularly with protein, is halted or the food can go rancid in their stomach, causing sickness.

Koi have been accidentally or deliberately released into the wild in every continent except Antarctica. They greatly increase the turbidity of the water because they are constantly stirring up the substrate. This makes waterways unattractive, reduces the abundance of aquatic plants, and can render the water unsuitable for swimming or drinking even by livestock. In some countries, koi have caused so much damage to waterways that vast amounts of money and effort have been spent trying to eradicate them, largely unsuccessfully.