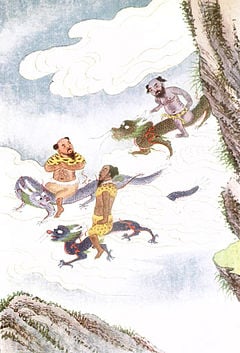 Chinese mythology is a collection of cultural history, folktales, and religious tradition that has been passed down for centuries in oral or written form. There are several aspects to Chinese mythology, including creation myths and legends, and myths concerning the founding of Chinese culture and the Chinese state. Chinese mythology generally concerns moral issues and informs people about their culture and values. Like many mythologies, some people believe it to be at least in part a factual recording of history.

Chinese myths are thought to have originated around the twelfth century B.C.E., and were transmitted orally for over one thousand years before being recorded in books such as Shui Jing Zhu and Shan Hai Jing. These early works are the sources for the myths which are extant today. There has been extensive interaction between Chinese mythology and the major belief systems of Confucianism, Taoism, and Buddhism. Elements of pre-existing mythology were adapted into these belief systems, and some of the teachings and beliefs of these systems also became incorporated into Chinese mythology. For example, the Taoist belief in a spiritual paradise became incorporated into mythology, as the place where immortals and deities dwell. The myths glorifying the benevolent rulers of the past, the Three August Ones and Five Emperors became a part of the Confucian political philosophy. 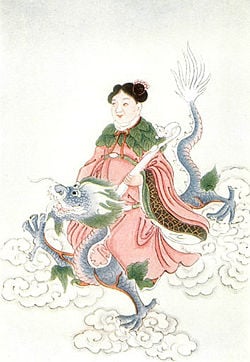 Historians have conjectured that much of Chinese mythology originated in the twelfth century B.C.E.. The myths and the legends were passed down orally for over a thousand years, before being written down in early books such as Shui Jing Zhu and Shan Hai Jing. Other myths continued to be transmitted through oral traditions such as theater, dance, and song, before being recorded in the form of novels such as Fengshen Yanyi. Most of the myths extant today are derived from these works.

Some myths survive in theatrical or literary forms, as plays or novels. Important mythological fiction which is regarded as definitive records of these myths includes:

A unique characteristic of Chinese culture is the relatively late appearance in Chinese literature of creation myths. Those that do exist appear well after the foundation of Confucianism, Taoism, and folk religions. The stories exist in several, often conflicting, versions, with the creation of the first humans variously ascribed to Shangdi, Heaven, Nuwa, Pangu, and Yu Huang.

Three August Ones and Five Emperors

Following the age of Nuwa and Fuxi (or contemporaneous in some versions) was the age of the Three August Ones and Five Emperors (三皇五帝), a collection of legendary rulers who ruled between c. 2850 B.C.E. and 2205 B.C.E., which is the time preceding the Xia dynasty.

These rulers were generally regarded as extremely moral and benevolent rulers, examples to be emulated by latter day kings and emperors. When Qin Shi Huang united China in 221 B.C.E., he felt that his achievements had surpassed those of all the rulers who had gone before him. He combined the ancient tiles of Huang (皇) and Di (帝) to create a new title, Huangdi (皇帝), usually translated as Emperor.

Shunchose Yu the Great (禹)to succeed him as leader of the Huaxia tribe. According to legend, the Yellow River was prone to flooding, and erupted in a huge flood in the time of Yao. Yu's father, Gun, was put in charge of flood control by Yao, but failed to alleviate the problem after nine years. He was executed by Shun, and Yu took his father's place, leading the people in building canals and levees. After 13 years of toil, the flooding problems were solved. Shun enfeoffed Yu in Xia, in present-day Wan County in Henan. On his death, Shun passed the leadership to Yu. The main source for the story of Yu and the Great Flood comes from The Counsels of Yu the Great in the Classic of History (尚書•大禹謨). Because of his achievement in resolving the Great Flood, Yu, alone among the mythological rulers, is usually called "Yu the Great" (大禹). Alternatively, he is called Emperor Yu (帝禹), like his predecessors.

Upon Yu's death, his position as leader was not passed on to his deputy, but was inherited by his son Qi. Various sources differ as to the process by which Qi rose to this position. Most versions agree that during his lifetime, Yu had designated his deputy, Gaotao (皋陶), to be his successor. When Gaotao died before him, Yu then selected Gaotao's son, Boyi (伯益) as successor. One version then says that all the peoples who had submitted to Yu admired Qi more than Boyi, and Yu passed power to Qi instead. Another version holds that Boyi ceremoniously offered the position to Qi, who accepted, against convention, because he had the support of other leaders. A third version says that Qi killed Boyi and usurped his position as leader.

In any case, Qi's succession broke the previous convention of meritorious succession, and began what is traditionally regarded as the first dynasty in Chinese history. The dynasty is called "Xia" after Yu's centre of power.

The Xia Dynasty is considered at least semi-mythological. The Records of the Grand Historian and the Bamboo Annals record the names of 17 kings of the Xia Dynasty. However, there is no conclusive archaeological evidence of its capital or its existence as a state of any significant size. Archaeological evidence does not point towards a significant urban civilization until the Shang Dynasty.

Jie, the last king of the Xia Dynasty, is said to have been a bloodthirsty despot. Tang of Shang, a tribal leader, revolted against Xia rule and eventually overthrew Jie and established the Shang Dynasty, based in Anyang. The Shang Dynasty ruled from ca. 1766 B.C.E. to ca. 1050 B.C.E.. It came to an end when the last despotic ruler, Zhou of Shang, was overthrown by the new Zhou Dynasty. The end of the Shang Dynasty and the establishment of the Zhou is the subject of the influential mythological fiction, Investiture of the Gods (封神演義).

Unlike the preceding Xia Dynasty, there is clear archaeological evidence of a government center at Yinxu in Anyang, and of an urban civilization in the Shang Dynasty. However, the chronology of the first three dynasties remains an area of active research and controversy.

The Jade Emperor is believed to be the most important god. The origins of the Jade Emperor and how he came to be regarded as a deity are unknown. Also known as Yu Huang Shang-ti, his name means “the August Personage of Jade.” He is considered to be the first god and to be in charge of all the gods and goddesses. Many myths about well-known gods and goddesses who were in charge of different aspects of culture exist, but all of them were subordinate to the Jade Emperor.

The Chinese dragon is one of the most important mythical creatures in Chinese mythology. The Chinese dragon is considered to be the most powerful and divine creature and is believed to be the controller of all waters. The dragon symbolized great power and was very supportive of heroes and gods. One of the most famous dragons in Chinese mythology is Ying Long, or "Responding Dragon." He is said to be the god of rain. Many people in different places pray to him in order to receive rain. In Chinese mythology, dragons are believed to be able to create clouds with their breath. Chinese people often use the term "Descendants of the Dragon" as a sign of ethnic identity.

There has been extensive interaction between Chinese mythology and the major belief systems of Confucianism, Taoism, and Buddhism. Elements of pre-existing mythology were adapted into these belief systems as they developed (in the case of Taoism), or were assimilated into Chinese culture (in the case of Buddhism). Elements from the teachings and beliefs of these systems also became incorporated into Chinese mythology. For example, the Taoist belief in a spiritual paradise became incorporated into mythology, as the place where immortals and deities dwell. The myths glorifying the benevolent rulers of the past, the Three August Ones and Five Emperors became a part of the Confucian political philosophy.

Retrieved from https://www.newworldencyclopedia.org/p/index.php?title=Chinese_mythology&oldid=1032655
Categories:
Hidden category:
This page was last edited on 20 February 2020, at 17:07.
Content is available under Creative Commons Attribution/Share-Alike License; additional terms may apply. See Terms of Use for details.