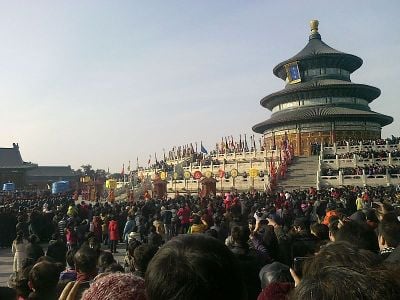 Annual heavenly sacrifice in honor of the Highest Deity the Heavenly Ruler Huángtiān Shàngdì) is held at the Temple of Heaven in Beijing.

Shangdi (上帝, pinyin: Shàngdì, Wade-Giles Shang Ti), or simply Di (帝), is the High God (or Clan Ancestor) postulated in the earliest-known religious system of the Han Chinese people. The term can literally be translated as "Emperor (or Sovereign) Above," "Lord On High," "Highest Lord," "the Supreme God," or "Celestial Lord." While such terminology implies parallels with the divinities of the world's monotheistic traditions, an important difference must be acknowledged: Shangdi was seen as one deity (ancestor) among many. In this way, Shangdi bears more similarities to the dyeus figures in Indo-European religions (e.g., Zeus, Jupiter, Tiwaz) than to the God of Jews, Christians and Muslims.

As noted above, Shangdi was an important religious concept from the Shang Dynasty (ca. 1766 B.C.E. - ca. 1050 B.C.E.) onwards, where he was seemingly understood as a composite ancestor of the ruling dynasty. From the Zhou Dynasty (周朝) (1122 B.C.E. to 256 B.C.E.), however, the deity's position in the Chinese religious imagination was replaced by Tian (天), a more distant and moralistic figure.

This being said, Shangdi is also the name given for God in the Standard Mandarin Union Version of the Bible, though shen 神 (lit. spirit or deity) was also adopted by Protestant missionaries in China to refer to the Christian God. Much like the ancestors, Shangdi is never represented with images or idols in Chinese tradition.

Historical Evidence of Belief in Shangdi

The earliest references to Shangdi are found in Oracle Bone inscriptions of the Shang Dynasty (ca. 1600 B.C.E. - ca. 1046 B.C.E.). These inscriptions, which record the royal court's prophetic queries to the gods and ancestors, provide considerable evidence for the characterization of Shangdi as an immanent, personal force, as they credit the deity's pleasure or displeasure for many of the vicissitudes of life. For example, one extant text puts forth the following query:

Apart from these mantic inscriptions, Shangdi is first mentioned in Chinese literature in the Five Classics, (五經, pinyin: Wujing) allegedly compiled by Confucius in the sixth century B.C.E. The Wujing was a collection of five books that represented the pinnacle of Chinese culture at that time, the oldest strata of which were first written around 1000 B.C.E. All of the five classics include references to Shangdi:

In particular, the Classic of History (書經, pinyin: Shujing), which is possibly the earliest recorded Chinese narrative, contains many references to the deity, with the majority found in its (historically) earliest chapters. For instance, the second of the Shujing's five books, the "Book of Yu" (虞書, pinyin: Yushu), speaks numerous times of Shangdi in its description of the exploits of Emperor Shun (the predecessor to the heroic Da Yu (大禹), the first emperor of the Xia Dynasty). This section specifically describes the emperor's yearly sacrifices to Shangdi,[3] a fact the supports the Confucian contention that belief in Shangdi predated the Xia Dynasty.

Other classics mention Shangdi as well, though a formalized analysis showing the development of the term over time would be useful. Another "Classic" collection, the Four Books (四書, pinyin: Sishu), also mentions Shangdi, but it is a later compilation and the references are much more sparse and abstract, as the term had already begun to be displaced by "Tian."

Meaning & Use of Name

As noted above, the name "Shangdi" (上帝) refers to the Supreme God (or Supreme Ancestor) in the original religious system of the Han Chinese people. Literally, the term means "Above Emperor," which is taken to mean "Lord On High," "Highest Lord," or "Celestial Lord." As previously demonstrated, this particular understanding is tremendously ancient, with recorded usages spanning over three thousands years. This being said, the original notion of Shangdi came to be conflated with Tian (literally, "Heaven") from the Zhou Dynasty (周朝) onwards. By the time of the Han dynasty, the influential Confucian scholar Zheng Xuan declared that "Shangdi is another name for Tian." This historical development is summarized in Paper's excellent The Gods are Drunk:

Di (power - translated by many as "God") was an amorphous concept, not anthropomorphized, but the mythicized ancestor spirits could be communicated to and became intercessors with Shangdi (supreme power). Indeed, Robert Eno (1990) has recently argued that the term Di meant ancestors themselves as a collective. ... [However,] Chang Kwang-chih (1976:193) has pointed out that, in the Zhou period, "Shang Ti [Shangdi] now becomes divorced from any identification with the Shang ancestors and the world of the gods and the world of the ancestors become two distinctly different worlds." Chang places the reason for this shift to political expediency since the Shang ruling clan (Zi clan) had identified its ancestors with Shangdi, and the Zhou ruling clan (Ji clan) would not, of course, accept the Zi clan's conception of its power and the influence of its ancestral spirits.[4]

In general, this transition from Shangdi to Tian was characterized by a movement from a clan-based relational cosmos to a more universalized, moralistic understanding of the world.

From the earliest eras of Chinese history, Shangdi was a central deity in the upper-class/state cult, where He was officially worshiped through sacrificial rituals. Many of these rites, as noted above, suggest that Shangdi ruled over natural and ancestral spirits, who act as His ministers.[2][4] Shangdi was seen as one deity (ancestor), who apparently ruled a hierarchy of other gods controlling nature, as well as the spirits of the deceased.[5]

In the imperial period, once the identification between the personalized Shangdi of the Shang dynasty and the moralistic Tian of the Zhou dynasty was complete, the royal cult continued to honor the High God through annual rites. For example, the ruler of China in every Chinese dynasty would perform annual sacrificial rituals to Shangdi at the great Temple of Heaven in the imperial capital. During the ritual an unblemished bull would be slaughtered and presented as an animal sacrifice to Shangdi, where it was offered to the god's "spirit tablet" (神位, or shénwèi).[6] During an annual sacrifice, the emperor would carry these tablets to the north part of the Temple of Heaven, a place called the "Prayer Hall For Good Harvests," and place them on the throne.

In addition to the identification with Tian, popular worship also came to conflate Shangdi with the Jade Emperor, the head of the celestial pantheon.[7]

Uniquely, Chinese traditions do not appear to have a narrative for Shangdi in the earliest texts. Nor are there physical representations of him. However, the many references to Shangdi do assign attributes to his character, including: maleness, emotion, compassion, intellect, judgment, mastery, and greatness.

These portrayals appear to predate Daoist or Buddhist interpretations by anywhere from 500 to 2000 years.

Shangdi is also one of the main names used by Chinese Christians for the Christian God. It is first used in the southern China edition of the Chinese Union Version, a Mandarin Chinese translation of the Christian Bible. Nineteenth century British Protestant missionaries in China, such as James Legge, used the name Shangdi to refer to the Christian God, while American Protestant missionaries in northern China in the early twentieth century preferred the alternative Shen (神, pinyin: Shén), and another edition was printed reflecting this usage. By contrast, historically, Chinese Catholics have predominantly used the term "Tian Zhu" (天主, pinyin: tian1 zhu3; literally, "Lord of Heaven") to address God. Chinese philosophers of religion also use the name Shangdi to refer to the philosophical God. Newer versions of Chinese bibles that uses "Shen" add a space known as nuo tai before the character (" 神") to preserve formatting of the "Shangdi" editions.[10]

Retrieved from https://www.newworldencyclopedia.org/p/index.php?title=Shangdi&oldid=1070611
Categories:
Hidden category:
This page was last edited on 18 June 2022, at 15:31.
Content is available under Creative Commons Attribution/Share-Alike License; additional terms may apply. See Terms of Use for details.