The Yoeme or Yaqui are a border Native American people who originally lived in the valley of the Río Yaqui in the northern Mexican state of Sonora and throughout the Sonoran Desert region into the southwestern U.S. state of Arizona. The Yaqui call themselves "Yoeme," the Yaqui word for person ("yoemem" or "yo'emem" meaning "people"). The Yaqui call their homeland "Hiakim," from which some say the name "Yaqui" is derived.

Throughout their history, the Yaqui remained separate from the Aztec and Toltec empires. They were similarly never conquered by the Spanish, defeating successive expeditions of conquistadores in battle. However, they were successfully converted to Christianity by the Jesuits.

Contemporary Yaqui number approximately 25,000, many of whom speak the Yaqui language in addition to Spanish and/or English. Many Yaqui continue to live much as their ancestors did, farming the rich soil along the Yaqui River. The Yaqui dances are an integral part of their cultural identity, and these songs and dances continue to be passed on from generation to generation. Mexican and American Yaqui maintain strong cultural ties, gathering together each year for the Pascola ceremony at Eastertime, in which Catholic and native rituals are combined. Having survived persecution and efforts to remove them from their homelands, the Yaqui continue to practice their traditions while finding their place in the contemporary world. 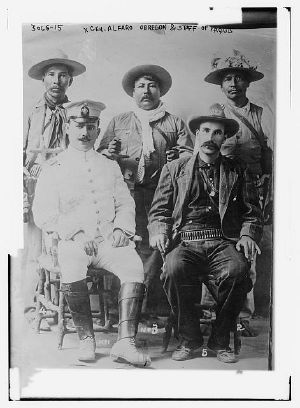 The Yaqui homeland is in Sonora, on the West coast of Mexico. They have also dwelt in the area of the southwestern United States since the incursions by Spanish missionaries and soldiers in the 1700s; Yaqui oral tradition is that there were small Yaqui settlements even earlier. The town of Tubac, Arizona, had Yaquis in its Spanish garrison.

Several communities of Yaqui have existed in Arizona since the 1800s: Pascua Pueblo is in the northwestern part of Tucson and Hu'upa was to the south (and has since been absorbed into the Valencia and Freeway neighborhood of Tucson); Marana has had continuous settlements of Yaqui.

For many years, the Yaqui lived peacefully in a relationship with the Jesuit missionaries, who had convinced them to settle into eight towns: Pótam, Vícam, Tórim, Bácum, Cócorit, Huirivis, Belem, and Rahum. This resulted in considerable mutual advantage: the Yaqui were able to develop a very productive economy, and the missionaries were able to employ the wealth created to extend their missionary activities further north. In the 1730s the Spanish colonial government began to alter this relationship, and eventually ordered all Jesuits out of Sonora. This created considerable unrest amongst the Yaqui and led to several rebellions. Further, the Franciscan priests never arrived to be their religious leaders, leaving the Yaqui with no western religious ties.

Yaqui leader Juan Banderas (executed 1833) wished to unite the Mayo, Opata, and Pima tribes, together with the Yaqui, to form an alliance separate from Mexico in the 1820s, but the effort failed and the Yaqui remained within the scope of Mexican legal authority.

The nation suffered a succession of brutalities by the Mexican authorities, including a notable massacre in 1868 where 150 Yaqui were burned to death inside a church by the army.

Another prominent (and failed) effort to win independence was led by the Yaqui leader Cajemé. Cajemé ("the one who does not stop to drink water"), born José Maria Leyva lived in the Mexican state of Sonora from 1837 to 1887.

José Maria Leyva successfully served in the Mexican military in the war against the French occupation, even participating in the capture of Emperor Maximilian in May of 1867. José Maria Leyva's service proved so exemplary that he was later appointed to the office of "Alcalde Mayor" of the Yaqui by Sonora Governor Ignacio Pesqueira. Expected by Pesqueira to assist in pacifying the Yaqui people, he instead united the eight Yaqui pueblos into a small, independent republic and unexpectedly announced he would not recognize the Mexican government unless his people were allowed to independently govern themselves. He led the Yaqui in a war against the Mexican state and those who sought to control and confiscate the traditional Yaqui lands. The war was long-lasting due to the skill of the Yaqui in battle under José Maria Leyva's leadership, and was particularly brutal, with atrocities on both sides but much larger-scale slaughter on the part of the forces of the Mexican government of Porfirio Díaz.

On May 5, 1886, a major siege was begun by the Mexican army at El Añil, and by May 16 the Yaqui suffered a major defeat when the Mexican army destroyed the fortification (Bancroft, 1888; Hernández, 1902). Eventually betrayed by a Yaqui woman whose sympathies lay with Molina and other Yaquis opposed to resisting Mexican authority, Cajemé was finally captured while visiting family in the city of Guaymas on April 13, 1887. Cajemé was extensively interviewed by Ramon Corral, who later became Governor of Sonora, and still later Vice-president of Mexico. It was at this time that Cajemé's famous saying was recorded: "Antes como antes y ahora como ahora. Antes éramos enemigos y peleábamos, Ahora está Todo concluido y todos somos amigos ( Before was before and now is now. Before we were enemies and we fought; now everything is concluded and all can be friends)" (Corral, 1959).

Following this war, the Yaqui were subjected to further brutality under the regime of Porfirio Díaz, who implemented a policy of ethnic transfer, in order to remove the Yaqui from Sonora so that he could encourage immigration from Europe and the United States. The government transferred tens of thousands of Yaqui from Sonora to the Yucatán peninsula, where they were sold as slaves and worked on plantations; many of these slaves died from the brutal working conditions. Many Yaqui fled to the United States to escape this persecution. Today, the Mexican municipality of Cajeme is named after the fallen Yaqui leader.

In the past, the Yaqui subsisted on agriculture, growing corn, beans, and squash (like many of the natives of the region). The Yaqui who lived in the Río Yaqui region and in coastal areas of Sonora and Sinaloa fished as well as farmed. The Yaqui also made cotton products. They have always been skillful warriors.

Yaqui (Yoem Noki), or Yoeme, is a language of the Uto-Aztecan family. It is spoken by about 15,000 people, mostly of the border Yaqui tribe, in the region around the Mexican state of Sonora, and Arizona in the United States. Most speakers also use Spanish or English.

The Yaqui religion (which is a syncretic religion of old Yaqui beliefs and practices and the teachings of Jesuit and later Franciscan missionaries) relies upon song, music, and dancing, all performed by designated members of the community. There are also other, Roman Catholic, practices that are woven into the old ways.

The Yaqui conception of the world is considerably different from that of their Mexican and United States neighbors. For example, the world (in Yaqui, anía) is composed of four separate worlds: the animal world, the world of people, the world of flowers, and the world of death. Much Yaqui ritual is centered upon perfecting these worlds and eliminating the harm that has been done to them, especially by people. There is a belief current among many Yaquis that the existence of the world depends on the yearly performance of the Lenten and Easter rituals.

Flowers are very important in the Yaqui culture. According to Yaqui teachings, flowers sprang up from the drops of blood that were shed at the Crucifixion. Flowers are viewed as the manifestation of souls, to the point that occasionally Yaqui males may greet a close male friend with the phrase "Haisa sewa?" ("How is the flower?").

The Yaqui dances are an integral part of their cultural identity, and these songs and dances have been traditionally passed on for generations.

Yaqui music is the music of the Yaqui tribe and people of Arizona and Sonora. Their most famous music is the "deer songs" which accompany the "deer dance." They are often noted for their mixture of American Indian and Catholic religious thought. The Yaqui deer song (maso bwikam) accompanies the deer dance which is performed by a pascola (from the Spanish 'pascua', Easter) dancer (also known as a "deer dancer"). Pascolas will perform at religio-social functions many times of the year, but especially during Lent and Easter. The pascola dancer is inspired to learn the dance from a highly trained individual based on a vision in a dream. The dancer is generally the center of attention, and more often than not serves as the host of the party, often pantomiming and telling stories to the crowd.

Their deer song rituals resemble those of other Aztec influenced groups though they are more central to their culture. Native and Spanish instruments are used including the harp, violin or fiddle, rasp, and rattles.

The deer dancer wears a breechcloth for his waist, a belt of deer hoof bells, and cocoon rattles around his ankles, which serve to remind to listeners of the rustling leaves in the wind. The headdress is a stag's head which is tied with a strip of leather around the performer's chin. The dancer wears a mask carved out of wood, and generally painted brown or black, painted to resemble either a human or a goat's face. The eyebrows and beard of the mask are crafted with hair or fibers. The deer dancer imitates the movements of a deer, appearing to run through the woods, search for other animals, and being wary of hunters. The dance is a tribute to the spirit of the deer, the harmony of the forest and the balance between man and nature. It is also an expression of thanks.

The majority of approximately 25,000 contemporary Yaquis continue to live in Sonora, Mexico. A number also live in the United States in southern Arizona. Many Yaqui continue to live much as their ancestors did, farming the rich soil along the Yaqui River. Mexican and American Yaqui maintain strong cultural ties, gathering together each year for the Pascola ceremony at Eastertime, in which Catholic and native rituals are combined.

In 1964, Yaquis received 202 acres (817,000 m²) of land from the U.S. Federal Government near Tucson, Arizona. Formal recognition of the Pascua Yaqui Tribe by the U. S. came on September 18, 1978. The tribe has generated income through gambling, and also owns an amphitheater concert venue in Tucson.

In the late 1960s, several Yaqui, among them Anselmo Valencia and Fernando Escalante, started development of a tract of land about eight km to the west of the old Hu'upa site, calling it New Pascua or, in Spanish, Pascua Nuevo. This settlement has a population (estimated in 2006) of about 4,000 and is the center of administration for the Tribe. Most of the middle-age population of New Pascua is trilingual in English, Spanish, and Yaqui. Many older people also speak the Yaqui language fluently, with a growing number of youth learning the Yaqui language in addition.

Many Yaquis also moved further north to Tempe, Arizona, and settled in a neighborhood named after Our Lady of Guadalupe. The town incorporated in 1979 as Guadalupe, Arizona. Today, more than 44 percent of the town's ethnic makeup is still Native American, many of them trilingual in Yaqui, English and Spanish languages. There is also a small Yaqui neighborhood in south South Scottsdale, Arizona.