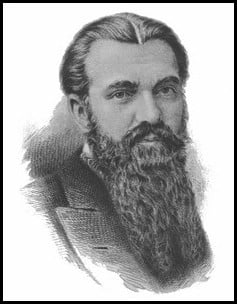 William Kingdon Clifford (May 4, 1845 - March 3, 1879) was an English mathematician and philosopher. Along with Hermann Grassmann, he invented what is now termed geometric algebra, a special case being the Clifford algebras named in his honor, which are used in contemporary mathematical physics. He was the first to suggest that gravitation might be a manifestation of an underlying geometrical structure of the universe, and contributed the advancement of non-Euclidean geometry developed by Bernhard Riemann and Nikolai Ivanovich Lobachevsky.

Under the influence of Charles Darwin and Herbert Spencer, Clifford developed a type of Darwinian theory of ethics within an atheistic framework. He coined the phrase "mind-stuff," comparable to the atom in physical matter, to refer to the contents of which the conscience is composed. He coined the term “tribal self” for the conscience, and developed a theory of ethics proposing that moral progress consists of subverting egotistical impulses to the dictates of the “tribal self,” which ensures the well-being and survival of the tribe; he suggested that some types of innate knowledge may have been “phylo-genetically” learned and passed down through successive generations. Due to his abhorrence of religion, he tried to explain the origin of moral and spiritual principles in biological terms and attempted to explain the development of ethics based on Darwinian theory of evolution.

Clifford was born at Exeter, England, on May 4, 1845. His second name, Kingdon, was the maiden name of his mother, who died when he was nine years old. During his childhood, Clifford showed exceptional ability at school, especially in mathematics. At the age of fifteen, he went on to King's College, London and in 1863 entered Trinity College, Cambridge, on a minor scholarship. He published his first mathematical paper just two months later. He was elected a member of “The Apostles,” an elite society at Cambridge whose membership included a number of British intellectuals. The society admitted only twelve students who were in residence at Cambridge, and in an effort to embody the “spirit of the Apostles,” they were required, during their weekly debates, to give their honest opinions on the most inflammatory and sensitive issues, and to respect the views of the other members. Clifford studied Greek, German, Spanish, French, Arabic and Sanskrit, as well as Morse code and shorthand. He was responsible for the translation of Bernhard Riemann’s 1854 paper on non-Euclidean geometry into English.

Clifford entered Cambridge as a member of the Anglican high church, but after reading Charles Darwin and meeting Herbert Spencer, he renounced his faith and became an advocate of agnosticism, and later, atheism. All the members of Cambridge University were required to reaffirm their faith in the Church of England annually, by publicly signing a declaration of the 39 Articles of the Protestant Faith, which had been formulated three hundred years earlier. By refusing to sign this declaration in 1866, Clifford excluded himself from a professorship at Cambridge, but he was elected fellow from 1868 to 1871, after being second “wrangler” in 1867 and second "Smith's prizeman." Being second was a fate he shared with others who became famous mathematicians, including William Thomson (Lord Kelvin) and James Clerk Maxwell.

In 1870 Clifford was part of an expedition to Italy to observe an eclipse, and survived a shipwreck along the Sicilian coast. In 1871 he was appointed professor of applied mathematics and mechanics at University College London, then known as the “godless college.” In 1874 he became a fellow of the Royal Society. He was also a member of the London Mathematical Society and the Metaphysical Society.

His contemporaries considered him a man of extraordinary acuteness and originality, gifted with quickness of thought and speech, a lucid style, wit and poetic fancy, and social warmth. In 1875 Clifford married Lucy Lane, originally from Barbados, who later became a well-known journalist and novelist in England. The couple had two daughters. He loved entertaining children, and wrote, “The Little People,” a book of fairy stories.

In 1876 Clifford suffered a serious collapse, possibly brought on by overwork; he taught and administered by day, and wrote by night. A six-month holiday in Algeria and Spain strengthened him enough to resume his duties at University College for eighteen months. To accommodate his failing health, the Senate of King’s College changed its statutes to allow Clifford to lecture only when he was able, and on topics of his own choosing. A Public Testimonial Fund was set up with the contributions of more than two hundred friends and colleagues, so that he would know of their support before his death. Late in 1878 he collapsed again. He went to Madeira to recover, but died there of tuberculosis on March 3, 1879.

Clifford was an innovator against the excessively analytic tendency of Cambridge mathematicians. After his death, a British journalist described him as “being equally at home in Space of 3, 4 or x dimensions.” Influenced by Riemann and Lobachevsky, Clifford studied non-Euclidean geometry. In 1870 he wrote On the Space Theory of Matter, arguing that energy and matter are simply different types of curvature of space. These ideas later played a fundamental role in Albert Einstein's general theory of relativity.

Clifford is now best remembered for his eponymous Clifford algebras, a type of associative algebra that generalizes the complex numbers and William Rowan Hamilton's quaternions. He employed octonions (biquaternions) to study motion in non-Euclidean spaces and on certain surfaces, now known as Klein-Clifford spaces. He showed that spaces of constant curvature could differ in topological structure. He also proved that a Riemann surface is topologically equivalent to a box with holes in it (Penrose 2004).

As a teacher, Clifford focused on forcing a student to think for himself, rather than on teaching the solution to a problem. He introduced the graphical and geometrical methods of the Germans August Ferdinand Möbius and Carl Cullman to English mathematicians.

His theory of graphs, or geometrical representations of algebraic functions, provided valuable suggestions for future mathematicians. He was interested in universal algebra and elliptic functions. His papers "Preliminary Sketch of Biquaternions” (1873), "On the Canonical Form and Dissection of a Riemann's Surface" (1877), and "Classification of Loci" (1878) are considered classics in mathematics. He also published several papers on algebraic forms and projective geometry.

Ethics and Philosophy of Science

Clifford developed a Darwinian evolutionary ethical theory, suggesting that some types of innate knowledge are “phylo-genetically” learned and passed down through successive generations. Thus we can instinctively know certain concepts which our ancestors may have had to struggle to work out by trial and error.

Clifford's name is chiefly associated with two phrases which he coined, "mind-stuff" and the "tribal self." “Mind-stuff” refers to the contents of which the conscience is composed. Clifford, influenced by the ideas of Baruch Spinoza, suggested that all existence involved “mind,” and that man’s awareness of the content of this mind was evolutionary. The relationship a material object and the “mind” associated with it was similar to the relationship between the printed words of a sentence and the meaning it conveys when it is read by someone.

The idea of the "tribal self" is essential to Clifford's ethical view. No human being exists in isolation; by nature man is part of a social organism. Moral progress involves the development in each individual of a "tribal self," or conscience, which directs the individual to behave in a way conducive to the welfare and survival of the "tribe." The ideal is to become a public-spirited and efficient citizen.

Much of Clifford's contemporary prominence was due to his attitude towards religion. He waged war on the ecclesiastical systems which seemed to him to favor "Obscurantism," and to put the claims of their sect above those of human society. He referred to Christianity as a plague, and to the clergy as enemies of humanity. Clifford was regarded by the church as a dangerous champion of the anti-spiritual tendencies then imputed to modern science. His 1879 essay, “The Ethics of Belief,” asserted that it was immoral to believe in something for which one did not have evidence, and criticized religious thinkers who proclaimed that blind faith was a virtue: "It is wrong always, everywhere, and for anyone, to believe anything upon insufficient evidence." This paper was attacked by pragmatist philosopher William James in his lecture, “The Will to Believe.” These two works are often read and published together as touchstones for the debate over evidentialism, faith, and overbelief.

Most of Clifford’s work was published posthumously.

Retrieved from https://www.newworldencyclopedia.org/p/index.php?title=William_Kingdon_Clifford&oldid=1043368
Categories:
Hidden category:
This page was last edited on 4 October 2020, at 17:58.
Content is available under Creative Commons Attribution/Share-Alike License; additional terms may apply. See Terms of Use for details.