Tahiti is the largest island of French Polynesia, located in the archipelago of the Society Islands in the southern Pacific Ocean. The capital is Papeete, on the northwest coast. Tahiti has also been historically known as "Otaheite." This lush tropical destination, described in the eighteenth century as an earthly paradise, has been a magnet for artists and writers over the years, and continues to be a favored spot for tourists. 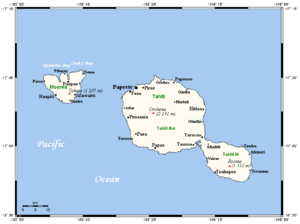 Map of Tahiti and Moorea 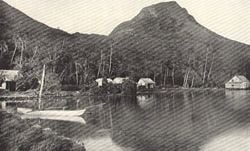 View of Raiatea Mountain. The mummies of Tahitian rulers were formerly deposited on this mountain, traditionally considered holy.

Tahiti is some 28 miles (45 kilometers) long at the widest point and covers 404 square miles (1,048 square kilometers), with the highest elevation being at 7,352 feet (2,241 meters) above sea level (Mount Orohena). The island consists of two roughly round areas centered on volcanic mountains, connected by a short isthmus named after the small town of Taravao, located there.

The northwestern part is known as Tahiti Nui ("big Tahiti"), and the southeastern part, much smaller, is known as Tahiti Iti ("small Tahiti"). Whereas Tahiti Nui is quite heavily populated (especially around Papeete) and benefits from rather good infrastructure such as roads and highways, Tahiti Iti has remained quite isolated, its southeastern half (Te Pari) being accessible only by boat or hiking.

The urban area of Papeete had a total population of 127,635 inhabitants at the 2002 census. Herman Melville was imprisoned in Papeete in 1842; his experiences there became the basis for the novel "Omoo." Paul Gauguin journeyed to Papeete in 1891 and, except for a two-year period in 1893-1895, never returned to France. He painted many Tahitian subjects. Papeari has a small Gauguin museum. Robert Louis Stevenson and Henry Adams also spent time in Papeete in 1891.

The native population is Polynesian, and is estimated to have settled on the island sometime between 300 C.E. and 800 C.E.

Although the islands were first spotted by a Spanish ship in 1606, Spain made no effort to trade with or colonize the island. Samuel Wallis, an English sea captain, sighted Tahiti on June 18, 1767, and is considered the first European visitor to the island.

Wallis was followed in April 1768 by the French explorer Louis-Antoine de Bougainville who was completing the first French circumnavigation. Bougainville made Tahiti famous in Europe when he published the account of his travel in Voyage autour du Monde. He described the island as an earthly paradise where men and women live happily in innocence, away from the corruption of civilization. His account of the island powerfully illustrated the concept of the noble savage, and influenced the utopian thoughts of philosophers such as Jean-Jacques Rousseau before the advent of the French Revolution.

In 1774, Captain James Cook visited the island, and estimated the population at that time to be about 200,000. Another estimate from the same period was 121,500. After Cook's visit, European ships landed on the island with ever greater frequency. The best-known of these ships was HMS Bounty, whose crew mutinied shortly after leaving Tahiti in 1789.

The European influence caused significant disruption to the traditional society, bringing prostitution, venereal diseases, and alcoholic beverages to the island. Introduced diseases, including typhus and smallpox, killed so many Tahitians that by 1797, the island's population was only about 16,000. Later it was to fall to 6,000. 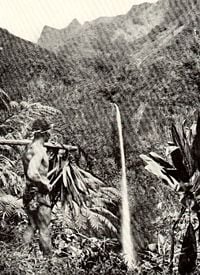 In 1842, a European crisis involving Morocco escalated between France and Great Britain when Admiral Dupetit-Thouars, acting independently of the French government, was able to convince Tahiti's Queen Pomare IV to accept a French protectorate. George Pritchard, a Birmingham-born missionary and acting British Consul, had been away at the time of the agreement. However, he returned to indoctrinate the locals against the Roman Catholic French. In November 1843, Dupetit-Thouars (again completely on his own initiative) landed sailors on the island, formally annexing it to France. He then proceeded to imprison Pritchard and subsequently sent him, unceremoniously, back to Britain.

News of the events in Tahiti had reached Europe in early 1844. The French statesman François Guizot, supported by King Louis-Philippe of France, had strongly renounced the annexation of the island. However, war between the French and the Tahitians continued until 1847. The island remained a French protectorate until June 29, 1880, when King Pomare V (1842–1891) was forced to cede the sovereignty of Tahiti and its dependencies to France. He was given the titular position of Officer of the Orders of the Legion of Honour and Agricultural Merit of France.

In 1946, Tahiti and the whole of French Polynesia became a French overseas territory. In 2003, this status was changed to that of an overseas collectivity.

In September 1995, after the government of Jacques Chirac proceeded with tests of nuclear devices off the shores of Moruroa Atoll, there was heavy rioting for three days in Papeete. The international airport was nearly destroyed, and 40 people were injured in the chaos. 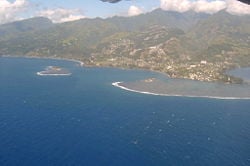 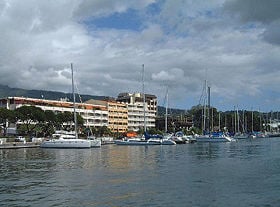 French Polynesia has a moderately developed economy that depends on imported goods, financial assistance from mainland France, and tourism, which accounts for about one-fourth of gross domestic product. The Heiva festival in Papeete, celebrating indigenous culture, and the commemoration of the storming of the Bastille in France, both of which take place annually in July, draw many tourists.

French Polynesia’s per capita GDP was US $17,500 in 2003. The territory received US$367 million in economic aid in 1997. Agriculture products included coconuts, vanilla, vegetables, fruits, poultry, beef, and dairy products. Additionally, in the mid-1990s, French Polynesia was producing more than 95 percent of the world’s supply of cultured pearls.

The legal tender currency of French Polynesia is the CFP franc.

The island had a population of 169,674 inhabitants according to the 2002 census. At that time, 69 percent of the population of French Polynesia lived on Tahiti. The urban area of Papeete, the capital city, had 127,635 inhabitants.

French Polynesia is largely Christian. Fifty–four percent of French Polynesians are Protestant, 30 percent Roman Catholic, and 16 percent are listed as “other.”

Tahitian is one of the two official languages of French Polynesia (along with French). It is an Eastern Polynesian language closely related to Rarotongan, New Zealand Māori, and Hawaiian.

Regarding literacy, 98 percent aged 14 and over can read and write. France provides education. A small French university, the University of French Polynesia, is located on Tahiti, and has around 2,000 students and about 60 researchers. Physicists Pascal Ortega (lightning studies) and Alessio Guarino (nonlinear physics) are among them. In the human sciences department, sociologist Laura Schuft has recieved attention for her study on the integration of mainlander French workers in Tahiti. 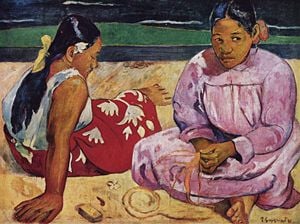 Tattooing is an integral part of Tahitan culture. The western word “tattoo” is taken from the Tahiti word "tatau" meaning open wound. A tattoo represent a girl's sexual maturity, tribe rank, and other social symbols. Tahitian woman would traditionally tattoo their loins and buttocks deep blue. A traditional tattoo is made from a bone containing between three and 20 needles. The needles are then dipped in a pigment made from soot of burnt candlenut mixed with water and oil. The needle is tapped against the skin with a wooden stick causing the skin to be punctured.

In the early nineteenth century, however, colonial laws severely restricted these and other dances, which were considered immoral. Herman Melville celebrated one such dance (he called it the "lori-lori") for its sensuality. They were replaced instead by genres of Christian music such as “himene tarava.” The word “himene” is derived from the English word “hymn” (Tahiti was first colonized by the English). Likewise, the harmonies and tunes of much of the music of Polynesia are western in style and originally derived from missionary influence via hymns and other church music. One unique quality of Polynesian music is the use of the sustained sixth chord in vocal music; typically the sixth chord is not used in religious music. Traditional instruments include a conch-shell called the “pu,” a nose flute called the “vivo,” and a wide variety of drums made from hollowed-out tree trunks and dog or shark skin.

Retrieved from https://www.newworldencyclopedia.org/p/index.php?title=Tahiti&oldid=1030798
Categories:
Hidden category:
This page was last edited on 15 January 2020, at 22:40.
Content is available under Creative Commons Attribution/Share-Alike License; additional terms may apply. See Terms of Use for details.