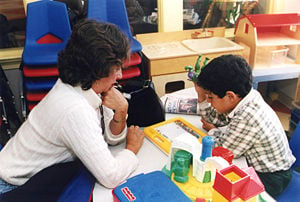 Special education is the term most commonly used to describe the methodology and practice of education for students with special needs, such as learning difficulties, mental health issues, specific disabilities (physical or developmental). Ideologies and application of special education can differ from region to region, nation to nation, but most developed countries recognize the importance of the field.

The goals of special education are similar to those for all children although the techniques used may be very different. Thus, those with physical disabilities such as blindness or deafness may learn alternative forms of reading and writing while others may require speech therapy or a physical environment that allows wheelchairs or other physical aids. For those with emotional or disabilities, therapy to bring about behavioral adjustments and the ability to function in a social environment may be needed. Accordingly, special education exists so as to ensure that students with special needs receive an education comparable to the rest of the student body, by employing researched and verified methods that help individual students learn in the style most beneficial to them.[1]

Early societies typically ostracized people who were different, providing them no educational opportunities. Religious institutions, churches and monasteries became refuges for the disabled. Later, institutions were built to house those with mental problems. Education developed, becoming available, and later mandated. It became essential to address the issue of educating those with special needs and difficulties in learning.

Before laws were established mandating special education in many parts of the industrialized world, students with special needs had varied educational experiences based upon their disabilities. Towards the end of the nineteenth century, children with physical handicaps, and whose families with sufficient financial resources, were often taught one-on-one by tutors, or attended specialized schools. One of the most famous examples of this is Helen Keller's tutor, Anne Sullivan, who was educated at Boston's Perkins School for the Blind. In many parts of Europe and the United States, these types of schools were opening by the beginning of the twentieth century, but were not options for those families who did not have the money to pay for such specialized education. Even many of the deaf and blind students who attended these schools were often not educated to a level comparable to non-disadvantaged children.

However, there were a few pioneers in special education at this time. William Stokoe was not only an educator of the deaf, he helped to develop sign language, allowing large numbers of deaf children the possibility of mastering a language. Thomas Hopkins Gallaudet was instrumental in founding a school for teaching the deaf. Valentin Haüy opened the first school for the blind and taught Louis Braille, who later went on to develop the Braille system of writing for the blind. Jean-Marc-Gaspard Itard, who is famous for his work with the feral child Victor, known as the “Wild boy of Aveyron,” developed a special program, the first attempt at special education, to try to teach him language and empathy, which he considered the key attributes that separated human beings from animals. Although his work with Victor was not entirely successful, it was useful in advancing knowledge of the importance of early exposure to language as a form of communication in the development of spoken linguistic skills. Despite all of these innovators and accomplishments, a majority of the blind and deaf remained under-educated.

Children with mental handicaps often fared worse. With some of the more extreme cases such as advanced autism, were restricted from attending public schools as they could be disruptive in classroom settings and were forced to either stay home and become entirely dependent upon their parents or were sent to mental institutions which provided little education. Edouard Seguin, a student of Itard, devised an early program of education for the mentally retarded, a "physiological method" involving motor and sensory training. Many of physical exercises that Sequin established as part of his program are still used in modern special education.

Some psychological conditions, such as Attention Deficit Disorder had not yet been studied or recognized in the early twentieth century, and while these disabilities did not hinder a student's ability to attend public or private schools, special attention was not placed upon why these students were struggling with their studies or lacked close friendships. Learning disabilities, such as dyslexia, dysphasia, and dyscalculia, also had not been well studied or understood and left students struggling with certain topics.

Recognition of the need for special education arose from the advancement towards more democratic and equal societies, particularly after World War II. In the United States, special education was an outgrowth of the Civil Rights Movement.[2] As schools became more integrated and equality in education became a central issue, greater attention was given to the special needs of students and all persons with disabilities. In 1975, the U.S. Congress passed Public Law 94-142—Education of All Handicapped Children Act, which dictated that all states receiving federal funding for public education must employee certain special education programs that the federal government had established. Thus, all such public schools were mandated to include all students of compulsory schooling age, and students with special needs were not to be segregated entirely from their fellow classmates. Other such laws were being passed around the same time throughout the industrialized world in recognition of the importance of giving an equal education to students with disabilities.

Since its establishment by law, special education has become an important field of study in psychology, medicine, and education. Many government, professional, and civil groups have been created across the world to help progress the development of effective special education programs. In 1994, in Salamanca, Spain, the World Conference on Special Needs Education: Access and Quality adopted the Salamanca Statement on Principles, Policy and Practice in Special Needs Education and a Framework for Action stating that:

As a result of the principle of "inclusive education" adopted at the conference, UNESCO was charged with promoting special education and encouraging research in programs for those with special needs to be implemented in all schools.

The provision of education to people with disabilities or learning difficulties varies from country to country, and state to state. The ability of a student to access a particular setting may depend on their specific needs, location, family choice, or government policy. Special educators describe a cascade of services, in which students with special needs receive services in varying degrees based on the degree to which they interact with the general school population. In the main, special education is provided in one, or a combination, of the following ways:

Regular education classes combined with special education services is a model often referred to as inclusion. In this model, students with special needs are educated with their typically developing peers for at least half of the day. In a full inclusion model, specialized services are provided within a regular classroom by sending the service provider in to work with one or more students in their regular classroom setting.[4] In a partial inclusion model, specialized services are provided outside a regular classroom. In this case, the student occasionally leaves the regular classroom to attend smaller, more intensive instructional sessions, or to receive other related service such as speech and language therapy, occupational and/or physical therapy, and social work. Inclusion is geared towards students who do not require intensive support.

Full-time placement in a special education classroom may be referred to as segregation. In this model, students with special needs spend no time with typically developing students. Segregation is geared towards students who require intensive support or are unable to cope with even brief attendance in a regular classroom.[6] Segregated students may attend the same school as other children from their neighborhood, but spend their time exclusively in a special-needs classroom. Alternatively, these students may attend a special school that is specifically designed, resourced, and staffed to meet the needs of the particular students who attend it.

A student whose disabilities preclude attending any school is said to be excluded. Such a student may be in hospital, homebound, or detained by the criminal justice system. These students may receive one-on-one instruction or group instruction within their institution. Residential centers, are live-in schools where complex needs can be met with appropriate medical care and provision of a variety of therapies, are sometimes considered segregation and sometimes exclusion. Students who have been suspended or expelled from their regular school are not considered excluded in this sense.

Many schools test students for mental, emotional, or developmental disabilities that are not easily apparent, so as to identify students who may need special education. Testing is crucial and complex since students in need of special education due to a particular disability may still have different levels of ability in different areas. Thus, both a general assessment of the child as a candidate for special education is necessary, and subsequent specific evaluation of their abilities and disabilities in various areas must be carried out to determine appropriate instructional methods.

Often times these tests are criticized, particularly since a result may not necessarily be an effective diagnosis of a condition, or in some instances result in an improper diagnosis. The most fervently debated method is the IQ Test, which is used both to pinpoint the students of highest intelligence, gifted children, and those who may need to be placed in special education classes. Many people claim it is not fair to measure every student's abilities against a rigid system, while others argue that it is culturally biased.[7]

In some cases, parents and students protest the students' placement into special education programs.[7] For example, a student may be placed into the special education program due to a mental health condition such as Obsessive-compulsive disorder (OCD), clinical depression, anxiety, panic attacks, or Attention-deficit hyperactivity disorder (ADHD), while the student and his parents believe that the condition is adequately managed through medication and outside therapy. In other cases, students whose parents believe they require the additional support of special education services are denied participation in the program based on the eligibility criteria. At-risk students (those with educational needs that are not associated with a disability) are often placed in classes with students with disabilities. It has been asserted that placing at-risk students in the same classes as disabled students may impede the educational progress of people with disabilities.[8]

Inclusion versus exclusion has been a topic of heated debate. Although the 1994 conference in Salamanca charged UNESCO with promoting inclusive education,[3] The practice of inclusion has been criticized by advocates and some parents of children with disabilities based on the fact that some of these students require instructional methods that differ dramatically from typical classroom methods.[9] Critics have asserted that it is not possible to deliver two or more very different instructional methods effectively in the same classroom.[9] As a result, the educational progress of students who depend on different instructional methods to learn often fall even further behind their peers without disabilities. Conversely, parents of typically developing children sometimes fear that the special needs of a single "fully included" student will take critical levels of attention and energy away from the rest of the class and thereby impair the academic achievements of all students.[9]