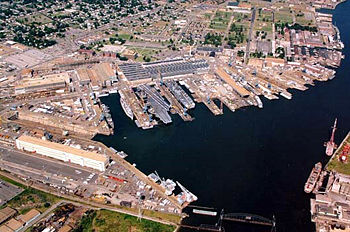 The Norfolk Naval Shipyard, belonging to the U.S. Navy, is one of the largest shipyards in the world.

Shipyards and dockyards are places that repair and build ships. These can be yachts, military vessels, cruise liners, or other cargo or passenger ships. The terms dockyards and shipyards are routinely used interchangeably, in part because their roles have often been interchanged or merged over the course of time. Sometimes, however, dockyards are associated more with maintenance and basing activities, whereas shipyards are associated more with initial construction. The site of a large shipyard normally includes many specialized cranes, dry docks, slipways, dust-free warehouses, painting facilities, and extremely large areas for the fabrication of ships.

When a ship's useful life is over, it makes its final voyage to a shipbreaking yard, often on a beach in South Asia. Historically, shipbreaking was carried out in dry docks in developed countries, but high wages and environmental regulations have resulted in movement of the industry to developing regions. 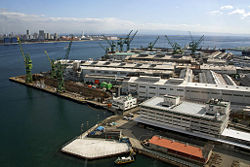 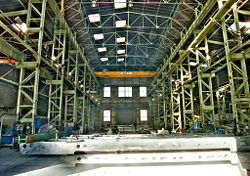 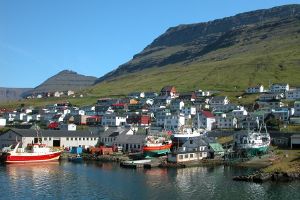 Most ship builders in the United States are privately owned, the largest being Northrop Grumman, a multi-billion dollar defense contractor. The publicly owned shipyards in the U.S. are Naval facilities providing basing, support and repair.

Shipyards are constructed by the sea or by tidal rivers to allow easy access for their ships. In the United Kingdom, for example, shipyards were established on the River Thames (King Henry VIII founded yards at Woolwich and Deptford in 1512 and 1513 respectively), River Mersey, River Tees, River Tyne, River Wear and River Clyde - the latter growing to be the World's pre-eminent shipbuilding center. Sir Alfred Yarrow established his yard by the Thames in London's Docklands in the late nineteenth century, before moving it northward to the banks of the Clyde at Scotstoun (1906-1908). Other famous UK shipyards include the Harland and Wolff yard in Belfast, Northern Ireland, where the Titanic was built, and the naval dockyard at Chatham, England on the Medway in north Kent.

The world's earliest dockyards were built in the Harappan port city of Lothal circa 2400 B.C.E. in Gujarat, India. Lothal's dockyards connected to an ancient course of the Sabarmati river on the trade route between Harappan cities in Sindh and the peninsula of Saurashtra when the surrounding Kutch desert was a part of the Arabian Sea. Lothal engineers accorded high priority to the creation of a dockyard and a warehouse to serve the purposes of maritime trade. The dock was built on the eastern flank of the town, and is regarded by archaeologists as an engineering feat of the highest order. It was located away from the main current of the river to avoid silting, but provided access to ships in high tide as well.

Ships were among the first items to be manufactured in a factory, several hundred years before the Industrial Revolution, in the Venice Arsenal, Venice, Italy. The Arsenal apparently mass produced nearly one ship every day using pre-manufactured parts and assembly lines and, at its height, employed 16,000 people.

Retrieved from https://www.newworldencyclopedia.org/p/index.php?title=Shipyard&oldid=1098206
Categories:
Hidden category:
This page was last edited on 27 January 2023, at 14:17.
Content is available under Creative Commons Attribution/Share-Alike License; additional terms may apply. See Terms of Use for details.