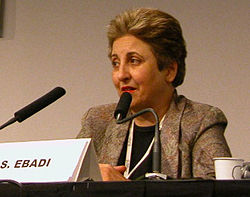 Shirin Ebadi Širin Ebâdi; born June 21, 1947) is an Iranian lawyer, human rights activist and founder of Children's Rights Support Association in Iran. On December 10, 2003, Ebadi was awarded the Nobel Peace Prize for her significant and pioneering efforts for democracy and human rights, especially women and children rights. She is the first Iranian and the first Muslim woman to receive the prize. In her public speeches, she emphasizes the fact that she is a Muslim and a democrat, pointing out that that it is possible to be both.

Ebadi sees herself as reforming Islam from within by helping to reconcile apparent contradictions in Islamic law. Even as she received her Nobel Prize, critics in Iran denounced her for appearing in public without a headscarf and for allegedly shaking the hand of a man. Defending her, reformist MP Elaheh Koulaie said that it was those who opposed democracy who wanted to discredit her.[1] Before the award, she was relatively unknown outside of Iran. The prize has enabled her to reach a wider audience.

Ebadei was born in Hamadan, Iran. Her father, Mohammad Ali Ebadi, was the city's chief notary public and professor of commercial law. The family moved to Tehran in 1948.

Ebadi was admitted to the law department, University of Tehran in 1965 and upon graduation in 1969 passed the qualification exams to become a judge. After a six-month internship period, she officially started her judging career in March 1970. She continued her studies in University of Tehran in the meanwhile and received a master's degree in law in 1971. In 1975, she became the first woman to preside over a legislative court.

Ebadi was demoted to a secretary at the branch where she previously presided, following the Iranian revolution in 1979, when conservative clerics insisted that women are prohibited to become judges in Islam. After protests by her and other female judges, they were assigned to a slightly higher position of a "law expert." She eventually requested early retirement as the situation remained unchanged.

As her applications were repeatedly rejected, Ebadi was not able to practice as a lawyer until 1993, while she already had a law office permit. She used this free time to write books and many articles in Iranian periodicals, which made her known widely.

Ebadi as a lawyer

Ebadi now lectures law at the University of Tehran and is a campaigner for strengthening the legal status of children and women, the latter of which played a key role in the May 1997 landslide presidential election of the reformist Mohammad Khatami.

As a lawyer, she is known for taking up cases of liberal and dissident figures who have fallen foul of the judiciary, one of the bastions of hardline power in Iran. She has represented the family of Dariush Forouhar, a dissident intellectual and politician who was found stabbed to death at his home. His wife, Parvaneh Eskandari, was also killed at the same time.

The couple were among several dissidents who died in a spate of grisly murders that terrorized Iran's "intellectual community." Suspicion fell on extremist hard-liners determined to put a stop to the more liberal climate fostered by President Khatami, who championed freedom of speech. The murders were found to be committed by a team of the employees of the Iranian Ministry of Intelligence, of which the leader Saeed Emami committed suicide in jail before being brought to the court.

She also represented the family of Ezzat Ebrahimnezhad, the only officially accepted case of murder in the Iranian student protests of July 1999. It was in the process of this case that in 2000, Ebadi was accused of distributing the video-taped confession of Amir Farshad Ebrahimi, a former member of one of the main pressure lobby force, Ansar-e Hezbollah, who accused them of receiving orders from high-level conservative authorities to attack members of President Khatami's cabinet. She claimed that she had only videotaped Amir Farshad Ebrahimi's confessions in order to present them to the court. This case was named "Tape makers" by hardliners who also were/are controlling the judiciary system in order to decrease the credibility of his videotaped deposition. Ebadi and Rohami were sentenced to five years in jail and suspension of their law licenses for sending Ebrahimi's videotaped deposition to Islamic President Khatami and the head of the Islamic judiciary. The sentences were later vacated by the Islamic judiciary's supreme court, but they did not forgive Ebarahimi's videotaped confession and sentenced him to 48 months jail, including 16 months solitary. This case brought increased focus on Iran from human rights groups abroad.

Ebadi has also defended various cases of child abuse cases and a few cases dealing with bans of periodicals (including the cases of Habibollah Peyman, Abbas Marufi, and Faraj Sarkouhi). She has also established two non-governmental organizations in Iran, the Society for Protecting the Rights of the Child (SPRC) and the Defenders of Human Rights Center (DHRC).

She also drafted the original text of a law against physical abuse of children, which was passed by the Iranian parliament in 2002.

On October 10, 2003, Ebadi was awarded the Nobel Peace Prize for her courageous efforts for democracy and human rights, especially for the rights of women and children. [2]The selection committee praised her as a "courageous person" who "has never heeded the threat to her own safety." In October, 2003 at a news conference she called on the government of Iran to release prisoners of conscience, to change the laws of inheritance and to lift restrictions of free speech [3].

The news filled Iranians all over the world with pride except for the ruling conservatives. In Tehran, people started congratulating each other in the streets. Car drivers, including taxis, opened lights, horning their klaxons, some distributed pastries while weeping with joy.[4]

The selection of Ebadi by the Norwegian Nobel committee is thought by some observers to represent an implicit criticism of American policy in the Middle East, in particular the 2003 Invasion of Iraq. George W. Bush has referred to Iran as a member of the axis of evil.

At a press conference shortly after the Peace Prize announcement, Ebadi herself explicitly rejected foreign interference in the country's affairs: "The fight for human rights is conducted in Iran by the Iranian people, and we are against any foreign intervention in Iran." [5]

Subsequently, Ebadi has openly defended the Islamic regime's nuclear development programme: "Aside from being economically justified, it has become a cause of national pride for an old nation with a glorious history. No Iranian government, regardless of its ideology or democratic credentials, would dare to stop the program." [6]

The decision of Nobel committee surprised some observers worldwide - then Pope John Paul II was the bookies' favorite to scoop the prestigious award amid feverish speculation that he was nearing death. Some observers, mostly supporters of Pope John Paul II, viewed her selection as a calculated and political one, along the lines of the selection of Lech Wałęsa and Mikhail Gorbachev, among others, for the Peace Award. They claimed that none of Ebadi's previous activities were directly related to the stated goals for the award of the Nobel Peace Prize, as originally stated by Alfred Nobel, and that according to the will of Alfred Nobel the prize should have been awarded "to the person who shall have done the most or the best work for fraternity between the nations, for the abolition or reduction of standing armies and for the holding and promotion of peace congresses."

In Iran, conservatives and fundamentalists were either silent or offensive to the selection by calling it a political act. Iranian state media waited hours to report the Nobel committee's decision—and then only as the last item on the radio news update. President Khatami has stated that although the scientific Nobels are important, the Peace Prize "is not important and is political." Khatami’s words raised objections in the general public, resulting in Vice President Mohammad Ali Abtahi stating that "abusing the President's words about Mrs. Ebadi is tantamount to abusing the prize bestowed on her for political considerations." President Khatami's comment, downgrading the historic significance of the Nobel Peace Prize, has angered many Iranians some of whom view his reaction as a sign of jealousy, as he was a Nobel Prize nominee for his dialogue proposal in 2001.

After the Nobel Prize

In November 2003, she declared that she would provide legal representation for the family of the Canadian-Iranian freelance photographer Zahra Kazemi, who died in custody on July 11th 2003 after being "arrested for taking pictures outside a prison during a student protest in Teheran" [7].

She lives with her husband, an electrical engineer, and has two daughters who are university students.

In 2004, Ebadi was listed among Forbes Magazine "Top 100 Most Powerful Women."

In the spring of 2005, Ebadi taught a course on "Islam and Human Rights" at the University of Arizona's James E. Rogers College of Law in Tucson, Arizona.

In fall of 2005, Ebadi presented a lecture titled "The Role of Women in World Peace" in a Woman's Study Review held at The City University of New York (CUNY), Lehman College.

In 2006, Random House released her first book for Western audiences, Iran Awakening: A Memoir of Revolution and Hope, with Azadeh Moaveni, published in English, French and German. A reading of the book was serialised as BBC Radio 4's Book of the Week in September 2006. American novelist David Ebershoff served as the book's editor.

In May 2006, she delivered the Commencement Address at the University of Michigan Law School in Ann Arbor, Michigan and a speech at UC Berkeley.

In September 2006, her presentation of a lecture entitled "Iran Awakening: Human Rights, Women and Islam" drew a sold-out crowd at the University of San Diego's Joan B. Kroc Distinguished Lecture Series.

In April 2007 (4/12/2007), she gave a presentation on "Peace and Social Justice in a Global World: The Role of Women and Islam" at the Saint Louis University, Saint Louis, MO. She was the Keynote speaker at The Seventh Annual Atlas Week, a week for global awareness.

Also in April 2007 (4/30/2007), she gave a presentation on "True Islam: Human Rights and The Roles of Faith" at Loyola University Chicago, Chicago, IL. She also received an honorary doctorate from the university.

On May 1, 2007 Shirin appeared at the Performing Arts Center at Cal Poly, San Luis Obispo, at the request of the Persian Students of Cal Poly to give a lecture which mainly dealt with Democracy, Women's Rights, and American relations in Iran.

On May 17, 2007 Ebadi announced that she would defend the Iranian American scholar Haleh Esfandiari, who is jailed in Tehran.[8]

On May 18th 2007 Ebadi presided over the Commencement ceremony of The New School at Madison Square Garden in New York. She presented her speech in Farsi, translated into English, and she also received an honorary Ph.D. from The New School.

Lawsuit against the United States

In 2004 Shirin Ebadi filled a lawsuit against the U.S. Department of Treasury because of restrictions she faced over publishing her memoir in the United States. American trade laws include prohibitions on writers from embargoed countries. The law also banned American literary agent Wendy Strothman from working with Ebadi. Azar Nafisi wrote a letter in support of Shirin Ebadi. Nafisi said that the law infringes on the first amendment. [9] After a long legal battle, Shirin Ebadi won and was able to publish her memoir in the United States [10]