The World Food Programme (WFP), the world's largest humanitarian agency, provides food to more than ninety million people in eighty countries. WFP is the food aid branch of the United Nations. From its headquarters in Rome and more than 80 country offices around the world, WFP works to help people who are unable to produce or obtain enough food for themselves and their families.

A recent strategy of the WFP has been seeking food sources for purchase that are more local to the crises. This strategy is found to have the dual impact of feeding the hungry and being a market for food produced in surrounding areas, thereby strengthening nearby economies. Award of several Nobel Prizes for Peace to people who have devoted their lives to feeding the world's poor recognizes the link between hunger and peace. As the 1970 Nobel Peace Prize recipient, Norman Borlaug said, "You can't build peace on empty stomachs." Increasingly, the world community is acknowledging that eliminating hunger is "today's moral imperative," hence inclusion in the United Nations Millennium Development Goals.[1]

The WFP was first conceived at the 1961 Food and Agricultural Organization (FAO) Conference, when George McGovern, director of the U.S. Food for Peace Program, proposed establishing a multilateral food aid program.[2] WFP was formally established in 1963, by the FAO and the United Nations General Assembly on a three-year experimental basis. In 1965, the program was extended and is now supported on a continuing basis.

On November 6, 2006, Josette Sheeran was appointed by the Secretary-General of the UN and Director-General of FAO to replace James T. Morris as Executive Director of WFP for a five-year term. The appointment took effect in April 2007. Sheeran was most recently Under Secretary for Economic, Business, and Agricultural Affairs in the United States Department of State and was previously managing editor of the Washington Times.

As Executive Director, Ms. Sheeran heads the Secretariat of WFP and is also responsible for implementing the programs and projects of the WFP.[3]

As of 2006, WFP had a staff of 10,587 people, with 829 staffers at the Rome headquarters. Close to 92 percent of WFP employees are working at field offices in eighty two different nations. WFP programs involve both urgently needed food aid in crisis situations and development projects.[4]

WFP strives to eradicate hunger and malnutrition, with the ultimate goal of eliminating the need for food aid.

According to its mission statement, the core strategies behind WFP activities are to provide food aid to: 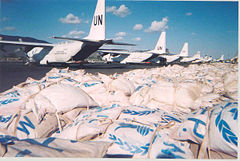 In 2006, WFP distributed 4 million metric tons of food to 87.8 million people in 78 countries; 63.4 million beneficiaries were aided in emergency operations, including victims of conflict, natural disasters, and economic failure, in countries like Afghanistan, the Democratic People’s Republic of Korea, Pakistan, Niger, and Lebanon. Direct expenditures, in 2006, were just below US$2.7 billion, with the most money being spent on protracted relief and recovery operations. WFP’s largest country operation in 2006 was Sudan: In Darfur, the Program reached more than 5 million people.

WFP is committed to providing at least half it's food aid to women and children, in order to fulfill the goal of ending child hunger. Research has shown that when food reaches the hands of women, it is more likely to reach the most needy, hungry children. In 2006, food assistance was provided to 58.8 million children, 30 percent of whom were under five. In-school feeding programs in 71 countries helped 20.2 million students focus on their studies and encourage parents to send their children, especially girls, to school. Recently, WFP has been strengthening school feeding programs by sending rations home with children and school teachers.

WFP operations are funded by donations from world governments, corporations, and private donors. In 2006 the Program received $2.7 billion in contributions. More than fifty five million U.S. dollars worth of cash and in kind items was donated in 2006, by corporate and private entities. All donations are completely voluntary. The organization’s administrative costs are only seven percent of its budget, one of the lowest percentages among aid agencies.

WFP has numerous partners to coordinate and cooperate with in emergencies and development projects. These partners include UN agencies, such as FAO (Food and Agriculture Organization) and UNHCR (UN High Commissioner for Refugees), government agencies such as United Kingdom Department for International Development (DFID), EuropeAID, USAID; nongovernmental organizations such as ECHO (Educational Concerns for Hungry Children), Hungrykids.org, Catholic Relief Services, Save the Children, Norwegian Refugee Council; as well as corporate partners such as TNT, Citigroup, and Boston Consultancy Group.[5]

In 2006, WFP partnered with 84 different corporate and private entities and over 3000 nongovernmental organizations to provide food and development projects for the people it serves.

In addition to partnering with UN agencies, governments, and thousands of nongovernmental organizations to deliver food and services, WFP as an organization initiates outreach to expand involvement of an ever widening circle of people to work to end hunger. In 2004, the WFP gave Auburn University the task of heading the first student led War on Hunger effort. Auburn founded the "Committee of 19," which has not only led campus and community hunger awareness events, but also developed a War on Hunger model for use on campuses across the country. The mission of the program is to develop and implement an action agenda for college students that encompasses hunger awareness and consciousness raising, academic initiatives, advocacy, and fund raising which will lead to university communities that are fully engaged in the efforts to eliminate world hunger and malnutrition.

In 2006, the Committee of 19 from Auburn University hosted a War on Hunger Summit, at which representatives from 29 universities were in attendance. At this summit, the model for a student-led War on Hunger initiative was presented and received strong support from the representatives present.

WFP has launched a global advocacy and fund raising event called Walk the World. On one single day each year, hundreds of thousands of people in every time zone all over the world walk to call for the end of child hunger. In 2005, more than 200,000 people walked in 296 locations. In 2006, there were 760,000 participants in 118 countries all over the world. This event is part of the campaign to achieve the Millennium Development Goals, specifically to halve the number of people who suffer from hunger and poverty by 2015.

The Program also uses its website to inform potential partners and supports and provide opportunities for giving and participating in its initiatives.

"Give a man a fish, you feed him for a day, Teach a man to fish and you feed him for a lifetime," is a well known Chinese proverb. The truth of this proverb illustrates an inevitable shortcoming of ongoing food aid. That is, if people in need are simply given a fish, it does not improve their circumstance indefinitely. In fact, ongoing food aid without more systematic, holistic assistance and opportunity can create a dependence on food aid and has even disinclined recipients to work at improving their circumstance through agriculture or other forms of work, creating devastating dependency on the food aid. This is not to say that food aid has no place in crisis situations. Indeed it does. However, there have been and are circumstances where food aid was and is provided when there is no food crisis, simply because there is benefit to the giver to distribute their surplus food. The World Food Programme as an organization must be vigilant to prevent becoming a pawn in this circumstance.

Corruption has played a role in ongoing food shortages and failed markets for food distribution. Whether it shows itself in government officials in recipient countries seeking to enrich themselves and hijacking food aid for their own purposes, or aid organizations contracted to distribute food that end up selling it to recipients to make money for other programs, this disrupts the original purpose for the providing of food aid. In fact, local farmers have been known to struggle with layers of corrupt middle men threatening and demanding a piece of the profits before allowing the farmers to get their crops to market or to where it is most needed. This artificially affects food prices and availability in developing markets. As of December 2007, WFP with other partners, is launching the Ethiopian Commodities Exchange that takes its inspiration from the beginnings of the original board of trade in Chicago, Illinois. The Ethiopian Exchange will control warehousing and inspection of commodities, as well as provide electronic signatures for trades, linking traders in villages by cellular phone. Although the exchange is just in its infancy, this is a promising step toward modernizing and standardizing the commodities trading system in Ethiopia. This could improve the process of buying and selling basic food supplies for all of Africa.

The World Food Programme feeds 90 million hungry people a year. This is only a small portion of the estimated 800 million people who go hungry every day. Destruction of the environment and overpopulation are also very real factors in the number of people facing hunger and starvation. Although these issues may be outside of the core mission of the World Food Programme, WFP has a responsibility to examine the complex network of problems that set the stage for massive hunger. WFP should work with partners, not just to distribute food but to work to establish stable economic conditions and educational opportunities that allow people to "learn to fish" so they can support themselves and provide for their families. In addition, it is crucial the WFP work to partner with parallel organizations and agencies in addressing the causes of food shortages, whether it is civil strife, natural catastrophe, corruption, environmental degradation, overpopulation or other causes.

Addressing the many and complex causes of hunger and food shortages will help to create a sustainable and healthy food supply and distribution system, that of a working and healthy economy. This will minimize the need for food giveaways to only the most unpredictable crises. Ideally, food aid is best delivered with integrated services that stabilize the crisis situation and restore affected people to normal self sufficiency as soon as possible. It must be the responsibility of the World Food Programme to provide oversight and accountability for their own programs, to insure the WFP is saving and enhancing the lives of people in a fair, healthy, and sustainable way. The World Food Programme will only become better at fulfilling its mission if it carefully evaluates the way its programs impact the people it serves over the long term, as well as the effectiveness and integrity of its supply and distribution partners.