The Semmering Railway, in Austria, which starts at Gloggnitz and leads over the Semmering pass to Mürzzuschlag, was the first mountain railway in Europe built with a standard gauge track. It is commonly referred to as the world's first true mountain railway, given the very difficult terrain and the considerable altitude difference that was mastered during its construction. It is also described as the first "imperial" railway because it linked the capital of Vienna with Austria’s Italian possessions to the south.

The pioneering design by Carl Ritter von Ghegain set the standard for alpine railways on long, steep escarpments. It is still fully functional as a part of the Austrian Southern Railway. In 1998, it was named a World Heritage Site and in 2004, it celebrated its 150th anniversary.

The Semmering Railway was named a World Heritage Site in 1998, after it was determined it had outstanding universal value and it met two of the 10 selection criteria.

The first criteria it met was that it represents an outstanding technological solution to a major physical problem in the construction of early railways.

Second, with the construction of the Semmering Railway, areas of great natural beauty became more easily accessible and as a result these were developed for residential and recreational use, creating a new form of cultural landscape.

When the first road over the Semmering was completed in the reign of Karl VI, in the early eighteenth, century an important step was taken towards opening this heavily forested area.

The extremely dangerous gradients of the old pass road led to plans for a new route over it at the beginning of the nineteenth century. But it was only in the years between 1839 and 1841 that the second road connection over the Semmering was rapidly built.

About the same time, two important railway lines were constructed, one from Vienna to Gloggnitz, and the other from Mürzzuschlag to Bruck an der Mur. Both started operations in 1842.[1] 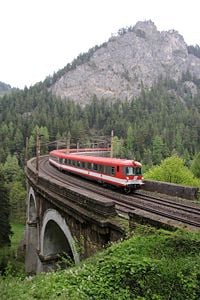 Express railcar on the Kalte Rinne viaduct on the Semmering line.

An Imperial Edict for a line over the Semmering was passed in 1844, but the original plans were shelved after doubts about tunneling. The revolution of 1848, in Vienna, changed the political climate and increased pressure for the line’s construction.

The Semmering line, engineered by Carl Ritter von Ghega, runs from Gloggnitz to Murzzuschlag, crosses the high Alps in a 42 km (26 mile) long section known as the Semmering Pass. It still forms part of the railway from Vienna in Austria to Italy and Slovenia. The Adriatic port of Trieste had special importance as part of the Austro-Hungarian Empire: Since it was the only access the state had to the sea, an efficient railway connection was of the utmost importance.[2]

The Semmering Railway was constructed between 1848 and 1854, by roughly 20,000 workers. The construction features 14 tunnels, 16 viaducts (several two-story), and over 100 curved stone bridges, as well as 11 small iron bridges. The stations and the buildings for the supervisors were often built directly from the waste material produced in the course of tunnel construction. 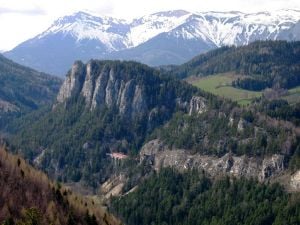 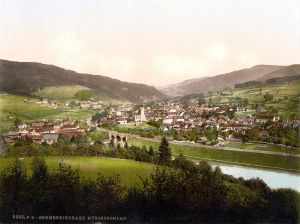 Semmering Railway at Mürzzuschlag, around 1900.

Across an overall track length of 41 km, the Semmering Railway was quite daring for its time; it had a maximum gradient five times that of previous railways. This was an entirely new technical dimension for railway construction, and new instruments and methods of surveying had to be developed to handle the resulting challenges. Also, new technologies were employed for the Engerth locomotives because the types in general use at this time could not handle the extreme gradients and turning radii.

The Semmering railway line is part of the Südbahn railway that runs between Vienna and Graz, continuing on to Maribor, Ljubljana and eventually to Trieste.

The Semmering is a mountain pass in the Eastern Northern Limestone Alps that forms a natural border between Lower Austria and Styria. The Semmering Railway passes 282 ft below the summit of the Semmering Pass (3215 ft/980 meters) by tunnel.

The railway led to the development of a vacation resort for the people of Vienna and the construction of several hotels. In the early 1900s, the hotels on the Semmering were among the leading hotels of the Alps, and hosted high-class visitors from throughout the Austrian Empire. The leading hotels—the Panhans, Südbahnhotel, and Erzherzog Johann—were joined in 1909, by a fourth luxury hotel, the Semmeringer Kurhaus. During World War I, it was known as the Physical-Dietetic Mountain Convalescent Home and served as an exclusive convalescent home for officers.[3]

In December 1938, the Kurhaus was taken over by the Wehrmacht and converted into a "German military convalescent hospital," where leading figures of the Third Reich went to convalesce.

Following World War II, the Russians occupied the Kurhaus, as the boundary with the British zone ran exactly along the Semmering Pass.

Steam locomotives worked the route for a century, but electrification took place between 1956 and 1959.

Today, winter sports and Summer hiking are the top draws for the town. The Semmering ski resort, which hosts Alpine skiing World Cup events, is located at the pass and extends on the Hirschenkogel mountain. Today, it is mainly used by skiers from Vienna, from where it can be reached within one hour, but increasingly is used by skiers from Hungary and Slovakia. 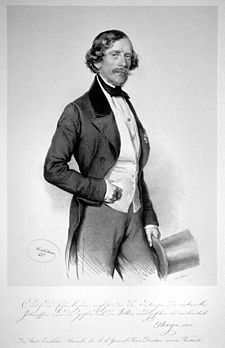 Karl Ritter von Ghega was the designer of the Semmering Railway. Born in Venice, in an Albanian family, he studied in Padua, where he took the examination for doctor of mathematics at the age of 18. He began his engineering career with road and hydraulic engineering in Venice. From 1836 to 1840, he was a construction supervisor for the railway track from Brno to Breclav, the so called Emperor Ferdinand North Railway. During this time, he studied the railways in England and other European countries. In 1842, entrusted with the entire planning of the future state railway, he made a study trip to North America. After his return he began planning the railway line from Mürzzuschlag to Graz and Trieste. In October 1844, the section of track between Graz and Mürzzuschlag was opened. The crossing of the Semmering was not believed possible, but as early as 1844, he submitted a plan for locomotives without an extra rail for gear wheels. Before the plan was even accepted, he began to enforce the construction of locomotives that could overcome the challenging gradients of Semmerling pass.

Ghega rejected the use of iron and steel as a matter of principle, which explains the "bricked railway" consisting of 65 million bricks and 80,000 flagstones. At the beginning of construction work, about 5,000 workmen a day were transported from Vienna to the building sites and back. For this labor intensive project, about 20,000 people were employed at the peak of construction. All digging and tunneling had to be done by hand as there were neither tunnel-drilling-machines nor strong blasting substances like dynamite available at the time.

Before its completion in 1854, von Ghega became a knight (Ritter).

He was next assigned to the building of a railway in Transylvania, but he died in Vienna from tuberculosis before it could be completed.

Apart from the electrification of the line and the construction of a new, second Semmering tunnel from 1949 to 1952, today’s railway is still substantially that designed by von Ghega and stands as a continuing testament to his engineering genius.

Retrieved from https://www.newworldencyclopedia.org/p/index.php?title=Semmering_Railway&oldid=1098002
Categories:
This page was last edited on 26 January 2023, at 09:44.
Content is available under Creative Commons Attribution/Share-Alike License; additional terms may apply. See Terms of Use for details.