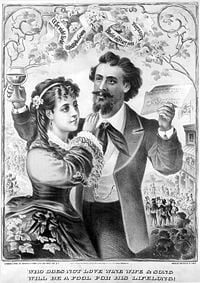 "Who does not love wine, wife and song, will be a fool for his lifelong!"—a vigorous 1873 assertion of cultural values of German-American immigrants

Prohibition In the United States (1920-1933) was the era during which the United States Constitution outlawed the manufacture, transportation, and sale of alcoholic beverages. The term also includes the prohibition of alcohol by state action at different times, and the social-political movement to secure prohibition. Selling, manufacturing, or transporting (including importing and exporting) alcohol were prohibited by the Eighteenth Amendment; however, drinking and possession of alcohol were never made illegal.

Many social problems have been attributed to the Prohibition era. A profitable, often violent, black market for alcohol flourished. Racketeering flourished when powerful gangs corrupted law enforcement agencies. Stronger liquor surged in popularity because its potency made it more profitable to smuggle. The cost of enforcing prohibition was high, and the lack of tax revenues on alcohol (some $500 million annually nationwide) affected government coffers. When repeal of prohibition occurred in 1933, following passage of the Twenty-first Amendment, organized crime lost nearly all of its black market alcohol profits in most states (states still had the right to enforce their own laws concerning alcohol consumption), because of competition with low-priced alcohol sales at legal liquor stores. This possibly led organized crime to further expansions into more illicit and socially harmful criminal activities, such as narcotics.

In colonial America, informal social controls in the home and community helped maintain the expectation that the abuse of alcohol was unacceptable. There was a clear consensus that while alcohol was a gift from God, its abuse was caused by the Devil. "Drunkenness was condemned and punished, but only as an abuse of a God-given gift. Drink itself was not looked upon as culpable, any more than food deserved blame for the sin of gluttony. Excess was a personal indiscretion." When informal controls failed, there were always legal ones.

While infractions did occur, the general sobriety of the colonists suggests the effectiveness of their system of informal and formal controls in a population that averaged about three and a half gallons of absolute alcohol per year per person. That rate was dramatically higher than the present rate of consumption.

Explanation were sought by medical men. One suggestion had come from one of the foremost physicians of the late eighteenth century, Dr. Benjamin Rush. In 1784, he argued that the excessive use of alcohol was injurious to physical and psychological health (he believed in moderation rather than prohibition). Apparently influenced by Rush's widely discussed belief, about 200 farmers in a Connecticut community formed a temperance association in 1789. Similar associations were formed in Virginia in 1800 and New York in 1808. Within the next decade, other temperance organizations were formed in eight states, some being statewide organizations.

The prohibition, or "dry," movement began in the 1840s, spearheaded by pietistic religious denominations, especially the Methodists.

Between 1830 and 1840, most temperance organizations began to argue that the only way to prevent drunkenness was to eliminate the consumption of alcohol. The Temperance Society became the Abstinence Society. While it began by advocating the temperate or moderate use of alcohol, the movement now insisted that no one should be permitted to drink any alcohol in any quantity. It did so with religious fervor and increasing stridency.

The prohibition of alcohol by law became a major issue in every political campaign from the national and state level down to those for school board members. In promoting what many prohibitionists saw as their religious duty, they perfected the techniques of pressure politics. Women in the movement even used their children to march, sing, and otherwise exert pressure at polling places. Dressed in white and clutching tiny American flags, the children would await their instruction to appeal to "wets" as they approached the voting booth.

Some successes were registered in the 1850s, including Maine's total ban on the manufacture and sale of liquor, adopted in 1851. However, the movement soon lost strength. It revived in the 1880s, with the Woman's Christian Temperance Union and the Prohibition Party.

The Civil War (1861-1865) had interrupted the temperance movement while Americans were preoccupied with that struggle. Then, after the war, the Women's Christian Temperance Union was founded. The organization did not promote either moderation or temperance, but rather prohibition. One of its methods to achieve that goal was education. It was believed that if it could "get to the children," it could create a dry sentiment leading to prohibition.

In 1881, Kansas became the first state to outlaw alcoholic beverages in its Constitution, with Carry Nation gaining notoriety for enforcing the provision herself by walking into saloons, scolding customers, and using her hatchet to destroy bottles of liquor. Other activists enforced the cause by entering saloons, singing, praying, and urging saloon keepers to stop selling alcohol. Many other states, especially in the South, also enacted prohibition, along with many individual counties. Hostility to saloons and their political influence was characteristic of the Progressive Era. Supported by the anti-German mood of World War I, the Anti-Saloon League, working with both major parties, pushed the Constitutional amendment through Congress and the states, taking effect in 1920.

Nationwide prohibition was accomplished by means of the Eighteenth Amendment to the United States Constitution (ratified January 29, 1919) and the Volstead Act (passed October 28, 1919). Prohibition began on January 16, 1920, when the Eighteenth Amendment went into effect. Federal Prohibition agents (police) were given the task of enforcing the law. The principal actors in the enactment of Prohibition were members of the Republican Party, the Democratic Party, and the Prohibition Party. It was truly a cooperative effort with "progressives" making up a substantial portion of both major political parties. The main force were pietistic Protestants, who comprised majorities in the Republican party in the North, and the Democratic party in the South. Catholics and Germans were the main opponents; however, World War I swayed public opinion away from Germans and their protests were largely ignored.

The 65th Congress met in 1917 and the Democratic dries outnumbered the wets by 140 to 64 while Republicans dries outnumbered the wets 138 to 62. The 1916 election saw both Democratic incumbent Woodrow Wilson and Republican candidate Charles Evans Hughes ignore the Prohibition issue, as was the case with both party's political platforms. Both Democrats and Republicans had strong wet and dry factions and the election was expected to be close, with neither candidate wanting to alienate any part of their political base.

Prohibition also referred to that part of the Temperance movement which wanted to make alcohol illegal. These groups brought about much change even prior to national prohibition. By 1905, three American states had already outlawed alcohol; by 1912, this was up to nine states; and, by 1916, legal prohibition was already in effect in 26 of the 48 states.

Although it was highly controversial, Prohibition was widely supported by diverse groups. Progressives believed that it would improve society and the Ku Klux Klan strongly supported its strict enforcement as generally did women, Southerners, those living in rural areas, and African-Americans.

While the manufacture, sale, and transport of alcohol was illegal in the U.S., it was not illegal in surrounding countries. Distilleries and breweries in Canada, Mexico, and the Caribbean flourished as their products were either consumed by visiting Americans or illegally imported to the United States.

Chicago became known as a haven for disobeying Prohibition during the time known as the Roaring Twenties. Many of Chicago's most notorious gangsters, including Al Capone and his enemy Bugs Moran, made millions of dollars through illegal alcohol sales.

The Twenty-first Amendment, which repealed nationwide prohibition, explicitly gives states the right to restrict or ban the purchase or sale of alcohol; this has led to a patchwork of laws, in which alcohol may be legally sold in some but not all towns or counties within a particular state. After the repeal of the national constitutional amendment, some states continued to enforce prohibition laws. Mississippi, which had made alcohol illegal in 1907, was the last state to repeal prohibition, in 1966. There are numerous "dry" counties or towns where no liquor is sold; even though liquor can be brought in for private consumption. It was never illegal to drink liquor in the United States.

On March 23, 1933, President Franklin D. Roosevelt signed into law an amendment to the Volstead Act known as the Cullen-Harrison bill allowing the manufacture and sale of "3.2 beer" (3.2 percent alcohol by weight) and light wines. The Eighteenth Amendment was repealed later in 1933 with ratification of the Twenty-first Amendment on December 5.

Prohibition had a notable effect on the brewing industry in the United States. When Prohibition ended, only half the breweries that had previously existed reopened. Wine historians also note that Prohibition destroyed what was a fledgling wine industry in the United States. Productive wine-quality grape vines were replaced by lower quality vines growing thicker skinned grapes that could be more easily transported. Much of the institutional knowledge was also lost as wine makers either emigrated to other wine producing countries or left the business altogether.

Despite the efforts of Heber J. Grant and the LDS Church, a Utah convention helped ratify the 21st Amendment While Utah can be considered the deciding 36th state to ratify the 21st Amendment and make it law, the day Utah passed the Amendment both Pennsylvania and Ohio passed it as well. All 38 states that decided to hold conventions passed the Amendment, while only 36 states were needed (three fourths of the 48 that existed). So, even if Utah hadn't passed it, it would have become law.

The first beer legally sold in the United States after Prohibition was Utica Club of the F.X. Matt's Brewery in Utica, New York.