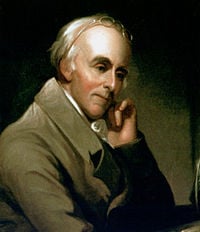 Benjamin Rush (December 24, 1745 – April 19, 1813) was a Founding Father of the United States. Rush lived in the state of Pennsylvania and was a physician, writer, educator, and humanitarian, as well as the founder of Dickinson College in Carlisle, Pennsylvania.

Rush was a signer of the Declaration of Independence and attended the Continental Congress. He was also an early opponent of slavery and capital punishment. Later in life, he became a professor of medical theory and clinical practice at the University of Pennsylvania. Although he had a wide influence on the development of American government, he is not as widely known as many of his American contemporaries.

Despite his many great contributions to early American society, Rush is today most famous as the man who, in 1812, helped reconcile two of the largest minds of the early Republic: Thomas Jefferson and John Adams.

Benjamin Rush was born in the Township of Byberry in Philadelphia County, which was about 14 miles from the center of Philadelphia. The township was incorporated into Philadelphia in 1854, and now remains one of its neighborhoods. His father died when Rush was six, and Rush spent most of his early life with his maternal uncle, the Reverend Samuel Finley. He attended Samuel Finley's academy at Nottingham, which would later become West Nottingham Academy.

He obtained a Bachelor of Arts degree at the College of New Jersey (now Princeton University), and then obtained a medical degree at the University of Edinburgh. While in Europe practicing medicine, he learned French, Italian, and Spanish. Returning to the Colonies in 1769, Rush opened a medical practice in Philadelphia and became Professor of Chemistry at the College of Philadelphia.

Rush published the first American textbook on Chemistry, several volumes on medical student education, and wrote influential patriotic essays. He was active in the Sons of Liberty and was elected to attend the provincial conference to send delegates to the Continental Congress. He consulted Thomas Paine on the writing of the profoundly influential pro-independence pamphlet, Common Sense. He was appointed to represent Pennsylvania and signed the Declaration of Independence.

In 1777, he became surgeon-general of the middle department of the Continental Army. Conflicts with the Army Medical service, specifically with Dr. William Shippen, Jr., led to Rush's resignation.

As General George Washington suffered a series of defeats in the war, Rush campaigned for his removal, as part of the Conway Cabal, losing Washington's trust and ending Rush's war activities. Rush later regretted his actions against Washington. In a letter to John Adams in 1812, Rush wrote, "He [Washington] was the highly favored instrument whose patriotism and name contributed greatly to the establishment of the independence of the United States."

In 1783, he was appointed to the staff of Pennsylvania Hospital, of which he remained a member until his death.

He was elected to the Pennsylvania convention, which adopted the Federal constitution and was appointed treasurer of the U.S. Mint, serving from 1797-1813.

He became Professor of medical theory and clinical practice at the University of Pennsylvania in 1791, though the quality of his medicine was quite primitive even for the time: He advocated bleeding (for almost any illness) long after its practice had declined. He became a social activist, an abolitionist, and was the most well-known physician in America at the time of his death. He was also founder of the private liberal arts college Dickinson College, in Carlisle, Pennsylvania.

Rush was a founding member of the Philadelphia Society for Alleviating the Miseries of Public Prisons (known today as the Philadelphia Prison Society), which had great influence in the construction of Eastern State Penitentiary in Philadelphia. He was against capital punishment and his opposition to the death penalty contributed to the Pennsylvania legislature's decision to abolish it for all crimes other than first-degree murder.

Rush believed that Americans should cherish the right to medical freedom in their Constitution, much as the right to freedom of religion is expressly guaranteed in that document.

Rush is reported to have argued that "Unless we put Medical Freedom into the Constitution, the time will come when medicine will organize into an undercover dictatorship…to restrict the art of healing to one class of men, and deny equal privilege to others, will be to constitute the Bastille of Medical Science. All such laws are un-American and despotic and have no place in a Republic…. The Constitution of this Republic should make special privilege for Medical Freedom as well as Religious Freedom."

Rush was an important figure in the development of educational theory and a number of his ideas were incorporated into the early United States' philosophy of public education. He advocated a uniform general education that would make the population more homogeneous and instill values required for good citizenship. He wanted Americans to understand the principles upon which the United States was founded so that they could be equipped to institute necessary reforms. He advocating dropping Latin and Greek as requirements and focusing on American English. He advocated education for girls as well as boys. And, he advocated developing specifically American habits rather than European habits.

Did you know?
Despite having been a slave owner himself, Benjamin Rush became an ardent abolitionist

As a prominent Presbyterian doctor and professor of chemistry in Philadelphia, Benjamin Rush provided a bold and respected voice against the slave trade which could not be ignored. The highlight of his involvement to abolish slavery could be the pamphlet he wrote that appeared in Philadelphia, Boston, and New York City in 1773, entitled, An Address to the Inhabitants of the British Settlements in America, upon Slave-Keeping. In this first of his many attacks on the social evils of his day, he not only attacked the slave trade, but the entire institution of slavery.

In 1787, Rush became an ardent abolitionist after having a dream in which the ghost of Saint Benezet, who had died in 1784, came walking down the beach to meet a group of Africans who had been relating stories about the horrors of slavery to Rush. He awoke from the dream determined to fill the gap left by Benezet's death. Though still a slave owner himself, in 1788, he also promised freedom to his slave, William Grubber. He co-founded, served as secretary, and later president (1803-13) of America's first abolitionist society named the Pennsylvania Abolition Society. Anything less than freedom for all men, black and white, would, he knew, give the lie to the Republican idealism of 1776.

In his efforts to aid Philadelphia's black community, Rush was heavily involved in promoting the African Church. He also recruited Richard Allen, Absalom Jones, and other blacks to help him attend the sick during the yellow fever epidemic of 1793.

Rush argued scientifically that Negroes were not by nature intellectually or morally inferior. Any apparent evidence to the contrary was only the perverted expression of slavery, which "is so foreign to the human mind, that the moral faculties, as well as those of the understanding are debased, and rendered torpid by it."

Rush died in 1813, just as his former pupil, Charles Caldwell, was gaining national recognition for his theories on innate racial differences and the inferiority of Africans and their descendants—a position that Rush had spent much of his life attempting to disprove to a young America, paving the way for the eventual realization for humankind to surrender prejudice to the universal truth that "all men are created equal." 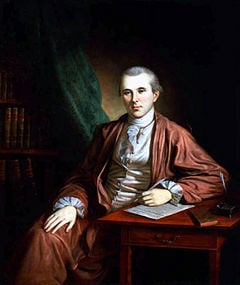 Rush was far ahead of his time in the treatment of mental illness. In fact, he is considered the "Father of American Psychiatry," publishing the first textbook on the subject in the United States, Medical Inquiries and Observations upon the Diseases of the Mind (1812). Rush was also an advocate of insane asylums, believing that with proper treatment, mental diseases could be cured. An asylum was even constructed in the area of his birthplace (the Philadelphia State Hospital). The emblem of the American Psychiatric Association bears his portrait. Benjamin Rush was also responsible for the invention of the idea of addiction.

Prior to his work, drunkenness was viewed as being sinful and a matter of choice. Rush introduced the idea that the alcoholic loses control over himself and identified the properties of alcohol, rather than the alcoholic's choice, as the causal agent. He developed the conception of addiction as a form of medical disease and finally developed the idea that abstinence is the only cure for addiction.

Rush is sometimes considered the father of therapeutic horticulture, particularly as it pertains to the institutionalized. In his book Medical Inquiries upon Diseases of the Mind, published in 1812 Rush wrote:

It has been remarked, that the maniacs of the male sex in all hospitals, who assist in cutting wood, making fires, and digging in a garden, and the females who are employed in washing, ironing, and scrubbing floors, often recover, while persons, whose rank exempts them from performing such services, languish away their lives within the walls of the hospital.

Besides his contributions to psychiatry, Benjamin Rush wrote a descriptive account of the yellow fever epidemic that struck Philadelphia in 1793 (during which he treated up to 120 patients per day), and what is considered to be the first case report on dengue fever (published in 1789 on a case from 1780).

Rush lived during the Age of Heroic Medicine (1780-1850), and is considered a strong advocate of “heroic medicine.”

During his career, he educated over 3000 medical students, and several of these established Rush Medical College (Chicago) in his honor, after his death. One of his last apprentices was Samuel A. Cartwright, later a Confederate States of America surgeon charged with improving sanitary conditions in the camps around Vicksburg, Mississippi, and Port Hudson, Louisiana.