Prajapati (Sanskrit: प्रजापति, romanized: Prajāpati, lit. 'lord and protector of creation', "Lord of Offspring" or "Lord of Creatures") is a Hindu god. He is in close communication with Nature, and is said to rule over the myriad sentient beings that walk the earth. Iconographically, he is often pictured with animals of all varieties. Furthermore, Prajapati was conceived of as a creator of the universe in early Vedic texts such as the Brahmanas. His connection with such creative powers as ascetic heat, the "Cosmic Germ," and the verbal power of the priesthood afforded Prajapati immense significance within Vedic sacrificial rituals.

However, in the post-Vedic period, as Hindu religion became more internalized, Prajapati largely fell out of currency. Eventually, the mythology surrounding Prajapati was absorbed into that of other Hindu creation gods, specifically Brahma, Shiva, and the Prajpatis. 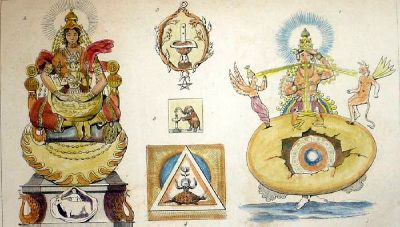 An attempt to depict the creative activities of Prajapati; a steel engraving from the 1850s

Prajapati as the Supreme Creator

Within the henotheistic context of the Vedic Hindu scriptures, in which one god was temporarily exalted above a plurality of others, it is not surprising to find numerous gods praised as the one supreme deity, including Varuna, Indra, and Prajapati. Consequently, the following verse from the Rg Veda extols the supreme virtue of the "Lord of creatures":

O Prajapati, none other than thou encompasses all these creatures; for whatever object of desire we sacrifice to thee, let that be ours; may we be lords of riches (Rg Veda 10.121.10).

However, Prajapati can be differentiated from the other supreme deities in the Vedic pantheon in an important way. Towards the end of the Rg Vedic period, seers became more concerned with the unifying principle of the cosmos, the singular entity that created and sustained the entirety of reality. Thus, a plethora of divine beings were introduced with names describing their function in the origin of the cosmos, such as Visvakarman, the "maker of all things," and Brhaspati, the "lord of Brahman."[1] Included among these was Prajapati. In contrast to gods such as Varuna and Indra, who had distinct personalities and complex mythologies that described their respective reigns over the other gods, Prajapati was more of an intellectual abstraction. Like Time (Kala), Prajapati was more accurately thought of as the source of all being, the embodiment of a creative principle rather than an anthropomorphic creator.[2]

In Rg Veda 10.121, the creation of the universe by way of the primordial "golden germ" (hiranyagarbha) is described, a process in which Prajapati plays an important role. The Golden Seed, it is explained, was born of Prajapati. The god himself then emerged from the chaotic matter and in order to provide the "fiery seed" that acts within the cosmic waters to trigger creation. This seems to bolster Prajapati's connection to tapas, the word for heat, which would later come to take on ascetic connotations (see below). At this point, Prajapati is identified as All, embodying the universe and providing the life-force which pervades it. Prajapati then rules over this creation by upholding the dharma, the moral principle of the cosmos, and in this way assumes the role as both a transcendent divine monarch as well as the essence of being that gives life to every living thing.[3]

As the lord of creatures, Prajapati was thought of as keeper and caregiver not only of humans but also of animals. Prajapati's connection with animals was evident by way of the numerous species that were connected to him in both written and visual depictions. One creation myth identifies him with the primordial boar, Emusa, which descends into the earth in order to procure a prototype of the earth-world. He is also connected to the bird and the tortoise, animals which were of great importance during the Agnicayana ritual, and later came to connect with the preserver god Vishnu as Garuda and Kurma, respectively. Additionally, Prajpati is linked to goats, bulls, cows, oxen, horses, antelope, and ants, among other noble creatures.

Particularly important is his connection with cattle. In one story, Prajapati is said to have created cattle, after which point the creatures drifted away from him. Seeing this, Prajapati made a god by the name of Pusan their guardian, and Pusan proceeded to follow the animals, collecting the wild beans (garmut) which sprung up in the places where the cattle had stayed. At the request of the cattle, these beans were given to Pusan and Soma as an offering, and so, from this point on, these beans are thought to bestow fecundity and sexual power upon human beings.

Prajapati was also thought to hold jurisdiction over human and animal reproduction. The motifs drawn from Rg Veda 10.121 describing Prajapati as the hot, active force in connection with the great egg of the cosmos continued on in the Atharva Veda and the Grhyasutras, texts which would become manuals for various rites of reproduction and child-rearing, including marriage, impregnation, birth, feeding, and teething. For example, Prajapati is among the dieties evoked at Hindu wedding ceremonies. Afterward, when the bride and groom lay down to consummate their marriage for the first time, it is Prajapati who is called upon to render the body of the bride fecund, allowing her to bring forth many children. Prajapati has also been included among the male figures surrounded by feminine powers in Hindu gestation symbolism, suggesting his role as presiding deity over sexuality, conception, and birth.

Prajapati and other dieties

Due to his status as a supreme creator god, Prajapati becomes connected with a number of other important gods in the Vedic pantheon, including Vayu (god of the wind), Varuna (one time supreme god of the Vedic pantheon), Vac (the all-important goddess of speech) and his daughters, the Usas (the dawn). However, no connection was as important as that made in the Brahmanas between he and Purusha, the primordial cosmic man. In Rg Veda 10.90, Purusha is credited with an immense act of self-sacrifice that brought the world into being. Like Purusha, Prajapati is also said to have sacrificed himself, resulting in the various divisions of empirical reality. Most importantly, his constituents became brahman, the sacred verbal power that was thought to mitigate the cleavage between human beings and the divine, and consequently became the lynchpin of all Vedic sacrifice. The remainder of Prajapati's constituents dispersed to create gods, humans, animals, and the rest of the phenomenal world. Thus, Prajapati gained his initial significance in the sacrificial drama. The Vedas insisted humans must must repeat this original primordial sacrificial event regularly in order to renew all aspects of space and time that Prajapati had originally put into place by way of his self-immolation.

Prajapati's importance in ritual is attested to by his identification with Agni, the fire god who was absolutely central to Vedic rituals. By identifying Agni as Prajpati, the latter became central to the Vedic ritual known as the Agnicayana, the ritual of fire. In the Vedic world-view, the installation of the fire at the central altar was thought to ensure the reconstitution of the universe. This year-long procedure established the world as a five-layered altar with fire at its heart, representing the atman, or the human soul. Agni was not only the soul of Prajpati but also the soul of the human being performing his sacrifice; hence the duality of human and god was temporarily dissolved during the fire ritual.

Similarly, in the Vajapeya ritual, the performer of the rite would consume the intoxicating soma beverage in hopes of experiencing the mystical totality of Prajapati. By realizing correspondence between the human soul and Prajpati in both the Agnicayana and the Vajapeya rituals, the sacrificer was thought to be able to escape perpetual death within the cosmic cycle. This idea would continue to influence the development of the Upanishads, which postulated a monistic essence that permeated the entire universe.

As the post-Vedic Hindu religion became more focused upon intuitive spirituality as opposed to the public sacrifices of the Vedas, Prajapati's significance steadily waned. The creator god Brahma came to absorb much of Prajapati's character and function, such as his connection with the golden egg of creation, and eventually supplanted him in importance. Prajapati also seems to have had some measure of influence upon the character of Rudra, who himself was labelled Pashupati, meaning "lord of the cattle," a lordship which was was eventually extended to all animals of the wild.

Eventually, Prajapati came to refer to any one of a collectivity of creation deities. This group of seven to ten gods were known as the Prajpatis, and were thought of as Brahma's sons who assisted him in fashioning the universe.

Retrieved from https://www.newworldencyclopedia.org/p/index.php?title=Prajapati&oldid=1090288
Categories:
Hidden category:
This page was last edited on 30 November 2022, at 22:13.
Content is available under Creative Commons Attribution/Share-Alike License; additional terms may apply. See Terms of Use for details.