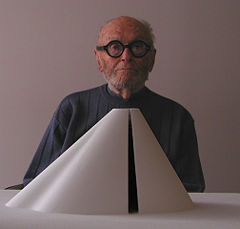 Philip Johnson at age 95 with his model of a 30' by 60' sculpture created for a collector in the Middle East. Posthumous installation is scheduled for completion in 2007. In addition to his many large projects, Johnson produced dozens of such small works over his long career, on paper and built.

Philip Cortelyou Johnson (July 8, 1906– January 25, 2005) was an influential American architect. Known for his humorous personality, Johnson is remembered for being both an architect and a comedian. During his years at Harvard University, Johnson interrupted his education with several extended trips to Europe, where he visited ancient monuments, and met Bauhaus architect, Ludwig Mies van der Rohe. Inspired by Europe’s modern architecture, Johnson and his friends Alfred H. Barr, Jr. and Henry-Russell Hitchcock assembled the landmark show "The International Style: Architecture Since 1922" at the Museum of Modern Art, in 1932, marking the introduction of modern architecture to the American public.

In 1930, he founded the Department of Architecture and Design at MoMA. After a period in uniform during World War II, Johnson returned to the Harvard Graduate School of Design to finally pursue his ultimate career as an architect. In 1956 he began designing public buildings and skyscrapers of glass and steel. Johnson's architectural work was a balancing act between two dominant trends in post-war American art: the more "serious" movement of Minimalism, and the more populist movement of Pop art. In (1978), he was awarded an American Institute of Architects Gold Medal, and the first Pritzker Architecture Prize, in 1979.

Philip Cortelyou Johnson was born in Cleveland, Ohio, where he attended the Hackley School, in Tarrytown, New York. As an undergraduate, Johnson studied at Harvard University, where his main areas of study were history and philosophy, particularly the work of the Pre-Socratic philosophers. During his years at Harvard University, Johnson interrupted his education with several extended trips to Europe, where he visited Chartres, the Parthenon, and other ancient monuments which later served as inspiration for Johnson‘s architecture. In 1928, Johnson met Bauhaus architect, Ludwig Mies van der Rohe, who was at the time designing the German Pavilion for the Barcelona exhibition of 1929. Deeply impressed by his work, Johnson later collaborated with him on a variety of structures.

Inspired by Europe’s modern architecture, Johnson toured Europe more comprehensively with his friends Alfred H. Barr, Jr. and Henry-Russell Hitchcock to examine recent trends in architecture. The three assembled their discoveries as the landmark show "The International Style: Architecture Since 1922" at the Museum of Modern Art, in 1932. The show was profoundly influential and marks the introduction of modern architecture to the American public. It introduced such pivotal architects as Le Corbusier, Gropius, and Mies van der Rohe. The exhibition was also notable for a controversy: architect Frank Lloyd Wright withdrew his entries, piqued that he was not more prominently featured.

According to critic Pater Blake, the importance of this show in shaping American architecture in the century "cannot be overstated." In the book accompanying the show, coauthored with Hitchcock, Johnson argued that the new modern style maintained three formal principles:

The definition of the movement as a "style" with distinct formal characteristics has been seen by some critics as downplaying the social and political bent that many of the European practitioners shared.

Johnson continued to work as a proponent of modern architecture, using the Museum of Modern Art as a bully pulpit. He arranged for Le Corbusier's first visit to the United States in 1935, then worked to bring Mies van der Rohe and Marcel Breuer to the United States as emigres.

In the 1930s, Johnson sympathized with Nazism, and expressed antisemitic ideas [1] [2] During the Great Depression, Johnson resigned his post at the Museum of Modern Art to try his hand at journalism and agrarian populist politics. His enthusiasm centered on a critique of the liberal welfare state, whose "failure" seemed to be much in evidence during the 1930s. As a correspondent, Johnson observed the Nuremberg Rallies in Germany and covered the invasion of Poland in 1939. The invasion proved the breaking point in Johnson's interest in journalism or politics; he returned to enlist in the U.S. Army. After a couple of self-admittedly undistinguished years in uniform, Johnson returned to the Harvard Graduate School of Design to finally pursue his ultimate career as an architect. His early influence as a practicing architect was his use of glass; his masterpiece was a "Glass House" that he designed as his own residence in New Canaan, Connecticut (1949). The concept of a Glass House set in a landscape with views as its real “walls” had been developed by many authors in the German Glasarchitektur drawings of the 1920s, and already been sketched in its initial form by Johnson's mentor Mies. The building is an essay in minimal structure, geometry, proportion, and the effects of transparency and reflection.

The house sits at the edge of a crest in Johnson’s estate, overlooking a pond. The building's sides are glass and charcoal-painted steel; the floor, of brick, is not flush with the ground but sits about ten inches or so above it. The interior is open, with the space divided by low walnut cabinets; a brick cylinder contains the bathroom and is the only object to reach floor to ceiling. Johnson built several structures on his estate. Fifty feet in front of the Glass House there is a guest house, echoing the proportions of the Glass House and completely enclosed in brick except for some small round windows at the rear. It contains a bathroom, a library, and a single bedroom with a gilt vaulted ceiling and shag carpet. There is also a painting gallery with an innovative viewing mechanism of rotating walls to hold paintings, as well as a sky-lit sculpture gallery. The last structures Johnson built on the estate were a library-study and a reception building.

After completing several houses in the idiom of Mies and Breuer, Johnson joined Mies in the design of the 39-story Seagram Building (1956). This collaboration resulted in the remarkable bronze and glass tower on Park Avenue, whose strength of proportion, elegance of material, and constructional rigor led the New York Times to judge it the most important building of the twentieth century.

Completing the Seagram Building with Mies also decisively marked a shift in Johnson's career. After this accomplishment, Johnson's practice became more public; he began working on a larger scale, planning such buildings as the Lincoln Center and the New York State Theater. It was at this point that Johnson also began to grow impatient with the orthodoxies of the International Style he himself had championed. 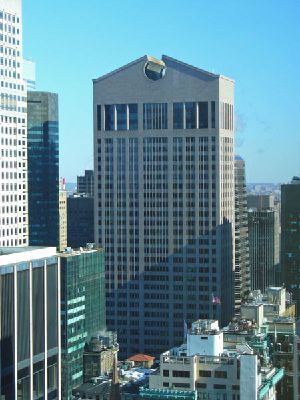 Although startling when first constructed, the glass and steel tower (along with many idioms of the modern movement) had, by the 1960s, become commonplace the world over. He eventually rejected much of the metallic appearance of earlier International Style buildings, and began designing spectacular, crystalline structures uniformly sheathed in glass. Many of these became instant icons, such as PPG Place in Pittsburgh and the Crystal Cathedral in Garden Grove, California.

Johnson's architectural work was a balancing act between two dominant trends in post-war American art: the more "serious" movement of Minimalism, and the more populist movement of Pop art. His best work has aspects of both movements. Johnson's personal collections reflected this dichotomy, as he introduced artists, such as Rothko and Warhol, to the Museum of Modern Art. Straddling these two camps, his work was often seen by purists of Minimalism and Pop art as too contaminated or influenced by the other.

From 1967 and onward, Johnson was in constant collaboration with fellow architects. From 1967 to 1991 Johnson collaborated with John Burgee and, from 1984 onward, Raj Ahuja. During this period Johnson became known at this time as a builder of iconic office towers because of the scale on which he built them.

The AT&T Building in Manhattan, now the Sony Building, was completed in 1984 and was immediately controversial for its neo-Georgian pediment (Chippendale top). At the time, it was seen as provocation on a grand scale; crowning a Manhattan skyscraper with a shape echoing a historical wardrobe top defied every precept of the modernist aesthetic. Historical pattern had been effectively outlawed among architects for years. In retrospect, other critics have seen the AT&T Building as the first Postmodernist statement, necessary in the context of Modernism's aesthetic cul-de-sac.

Johnson died in January 2005. [3] Johnson's publicly held archive, including architectural drawings, project records, and other papers up until 1964 is housed by the Drawings and Archives Department of Avery Architectural and Fine Arts Library at Columbia University, the Getty Museum, and the Museum of Modern Art. 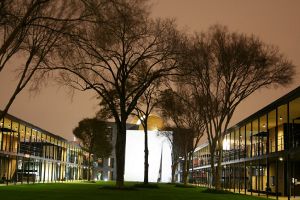 Chapel of St. Basil on the Academic Mall at the University of St. Thomas in Houston, Texas. Atrium of the New York State Theater at Lincoln Center.

The painters have every advantage over us today… Besides being able to tear up their failures—we never can seem to grow ivy fast enough—their materials cost them nothing. They have no committees of laymen telling them what to do. They have no deadlines, no budgets. We are all sickeningly familiar with the final cuts to our plans at the last moment. Why not take out the landscaping, the retaining walls, the colonnades? The building would be just as useful and much cheaper. True, an architect leads a hard life—for an artist.

…Comfort is not a function of beauty… purpose is not necessary to make a building beautiful… sooner or later we will fit our buildings so that they can be used… where form comes from I don't know, but it has nothing at all to do with the functional or sociological aspects of our architecture.

Retrieved from https://www.newworldencyclopedia.org/p/index.php?title=Philip_Johnson&oldid=1088950
Categories:
Hidden category:
This page was last edited on 24 November 2022, at 03:21.
Content is available under Creative Commons Attribution/Share-Alike License; additional terms may apply. See Terms of Use for details.