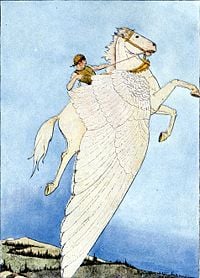 Pegasus and Bellerophon, from Hamilton Wright Mabie, ed.,Myths Every Child Should Know (1914)

There have many images of horses with wings throughout the ages, but all come from the creature in Greek mythology known as Pegasus, or Πήγασος (Pégasos)) in Greek. Variations of stories involving winged horses do exist, but the legend of Pegasus and the tragic hero Bellerophon is the most prominent. In modern culture, Pegasus has come to refer to all winged horses, not only the one of Greek mythology who was transformed into the constellation of his name upon his death. Pegasus is generally not considered to have a physical existence.

The symbolism of Pegasus, the hoofed master of the ground and winged master of the air, continues to represent speed, strength, and artistic inspiration. Encompassing beauty and a sense of majesty, it is a guide for humankind beyond the physical world to the realm where the spirit can soar without limit. 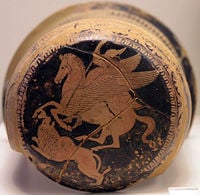 Greek poet, Hesiod connects the name Pegasos with the word for "spring” or "well," pēgē. Everywhere the winged horse struck hoof to earth, an inspiring spring burst forth: one on the Muses' Mount Helicon, at the behest of Poseidon, to prevent the mountain swelling too much and another at Troezen. The actual etymology of the name is most likely from Luwian pihassas "lightning", or pihassasas, a weather god (the god of lightning). In Hesiod, Pegasos is still associated with this original significance by carrying the thunderbolts for Zeus.

Unlike some other mythical creatures, it is unlikely that Pegasus is based on a real animal of the time, or a misunderstanding of fossilized remains. Rather, Pegasus seems to be an entirely fictitious creation, although horses were often central in mythology and cultures (including the unicorn). It is generally accepted that when Perseus beheaded the Gorgon (more popularly known today as Medusa) Pegasus sprang forth from her severed neck, keeping in accord with the idea of a "higher" birth, like the birth of Athena from the head of Zeus. The most common variant states that Pegasus was born of the earth as Medusa's blood spilled onto it and then into the sea foam. Since the God of the Sea, Poseidon is often said to be the father of Pegasus, this account seems more congruent than the other, although the nature of Greek mythology is often fragmented and often lacks a clear sense of continuity. 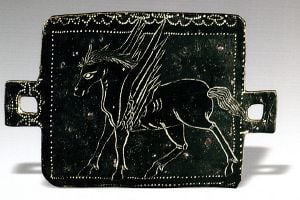 Pegasus appears in the story of Bellerophon, the son of King Glaucus, a warrior known for his breeding of fierce horses who betrayed and devoured him. Bellerophon was rumored to come from divine parentage, but even if not, he was by far the strongest and most handsome young man in his kingdom. He desired to tame Pegasus and was shown a way by Athena after he slept in her temple one night; presenting him with a golden bridle, Bellerophon mastered Pegasus, and together the two had many adventures. It was because of Pegasus that Bellerophon was able to slay the Chimera, a fearsome conglomerate of a lion, goat, and serpent.[1] 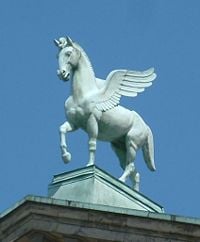 Pegasus on the top of the Poznań Opera House in Poland

Swift on the ground, and even more agile in the air, Pegasus' ability to master both land and sky lead Bellerophon to develop an exaggerated sense of pride, the main cause of a tragic hero's downfall in ancient Greece. Bellerophon tried to fly to Mount Olympus, the realm of the Gods, on Pegasus' back. Pegasus threw Bellerophon from his back for such blasphemous behavior, and was awarded his own place in Mount Olympus, in the stables where the horses that pulled Zeus's chariot were kept. Pegasus became the most prominent of all the horses, given the task of collecting thunderbolts and bringing them to Zeus when the God demanded them. [2]

Pegasus, not being immortal, was eventually turned into a constellation, but a single feather fell to the earth near the city of Tarsus, which is how the city earned its name.

In modern times, Pegasus became applied to flying horses in general, wherever they appear in art or literature. Viewed as a symbol of the soul able to fly beyond the realm of physical life, Pegasus is an inspirational magical creature endowing a sense of beauty and majesty to the works in which he appears. Pegasus has also been regarded as "the power of the creative spirit in all of us. He is the symbol of the Muses, of inspiration, and of the beauty we bring to our life and the lives of others."[3] 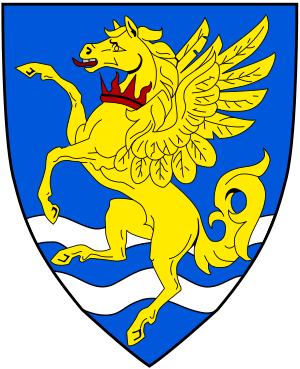 Pegasus appears on the Robinson College Crest in Cambridge

Of the mythical creatures represented in family crests and shields, Pegasus is not as predominant. However, there were some families known to bear the image of Pegasus, such as the Birchenshaw and the Cavalier families as well as Michael Drayton, the poet (1563-1631). Pegasus also appears in heraldic fashion on a shield in Westminster Abbey. Most of Pegasus images in heraldry features the animal cantering or with its front legs raised in the air and infrequently in mid-flight.[4]

Like many other figures in Greek mythology, Pegasus was used to name a series of stars and space objects that make up a constellation. The figure that these objects create when imposed with lines is that of an upside-down winged horse, observable in the Northern hemisphere during the summer and fall, while in the Southern hemisphere it can be seen in the winter and spring. The stars in the constellation are not particularly bright or well known stars, but the constellation does contain M15, a globular cluster of galaxies. Because of the vastness of space, the constellation actually contains a portion of space that holds over a dozen galaxies. [5]

Retrieved from https://www.newworldencyclopedia.org/p/index.php?title=Pegasus&oldid=1088722
Categories:
Hidden category:
This page was last edited on 23 November 2022, at 07:12.
Content is available under Creative Commons Attribution/Share-Alike License; additional terms may apply. See Terms of Use for details.