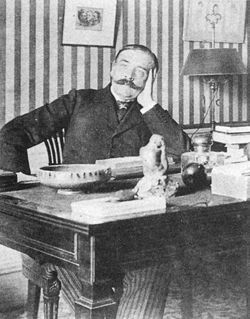 Octave Mirbeau (February 16, 1848 in Trévières – February 16, 1917) was a French journalist, art critic, pamphleteer, novelist, and playwright who achieved celebrity in Europe and great success among the public, while still appealing to the literary and artistic avant-garde.

After his debut in journalism in the service of the Bonapartists, and his debut in literature when he worked as a ghostwriter, Mirbeau began to publish under his own name. Thereafter, he wrote in order to express his own ethical principles and aesthetic values. A supporter of the anarchist cause and fervent supporter of Alfred Dreyfus, Mirbeau embodied the intellectual who involved himself in civic issues. Independent of all parties, Mirbeau believed that one’s primary duty was to remain lucid.

As an art critic, he campaigned on behalf of the “great gods nearest to his heart”; he sang the praises of Auguste Rodin, Claude Monet, Camille Pissarro, Paul Cézanne, Paul Gaugin, Pierre-August Renoir, Félix Vallotton, and Pierre Bonnard, and was an early advocate of Vincent van Gogh, Camille Claudel, Aristide Maillol, and Maurice Utrillo.[1]

After authoring ten ghostwritten novels, he made his own literary debut with Le Calvaire (Calvary, 1886), the writing of which helped him to overcome the traumatic effects of his devastating liaison with the ill-reputed Judith Vimmer, renamed Juliette Roux in the novel. In 1888, Mirbeau published L'Abbé Jules,[3] the first pre-Freudian novel written under the influence of Dostoyevsky to appear in French literature; the text featured two main characters: L’abbé Jules and Father Pamphile. In Sébastien Roch (1890),[4] Mirbeau purged the traumatic effects of his experience as a student during his sojourn among the Jesuits of Vannes. It has been speculated that the violence he suffered there probably included rape by one of the priests.

Crisis of the novel

Mirbeau then underwent a grave existential and literary crisis, yet during this time, he still published in serial form a pre-existentialist novel about the artist’s fate, Dans le ciel (In the Sky), introducing the figure of a painter directly modeled on van Gogh. In the aftermath of the Dreyfus Affair—which exacerbated Mirbeau’s pessimism—he published two novels judged to be scandalous by self-styled paragons of virtue: Le Jardin des supplices (The Torture Garden) (1899)[5] and Le Journal d'une femme de chambre (Diary of a Chambermaid) (1900),[6] then Les 21 jours d'un neurasthénique (1901). In these works, Mirbeau upset traditional novelistic conventions, practicing the technique of collage, transgressing the code of verisimilitude and fictional credibility, and defying the rules of propriety of his day.

Death of the novel

In his last two novels, La 628-E8 (1907) and Dingo (1913), he strayed ever further from realism, giving free rein to fantasy elements and casting his car and his own dog as heroes. Because of the indeterminacy of their genre affiliation, these last Mirbeau stories show how completely he had broken with the conventions of realist fiction.

In the theater, Mirbeau experienced world-wide acclaim with Les affaires sont les affaires (Business Is Business, 1903),[7] his classical comedy of manners and characters in the tradition of Molière. Here Mirbeau featured the character of Isidore Lechat, predecessor of the modern master of business intrigue, a product of the new world, a figure who makes money from everything and spreads his tentacles out over the world.

In 1908—at the end of a long legal and media battle—Mirbeau saw his play Le Foyer (Home) performed by the Comédie-Française. In this work he broached a new taboo subject, the economic and sexual exploitation of adolescents in a home that pretended to be a charitable one.

Published under the title of Farces et moralités (1904) were six small one act plays that were themselves considered extremely innovative. Here Mirbeau can be seen as anticipating the later theater of Bertolt Brecht, Marcel Aymé, Harold Pinter, and Eugène Ionesco. He calls language itself into question, demystifying law, ridiculing the discourse of politicians, and making fun of the language of love.

Mirbeau has never been forgotten, and there has been no interruption in the publication of his works. Yet his immense literary production has largely been known through only three works, and he was considered literarily and politically incorrect.

More recently, however, Mirbeau has been rediscovered and presented in a new light. A fuller appreciation of the role he played in the political, literary, and artistic world of la Belle Epoque is emerging.

Retrieved from https://www.newworldencyclopedia.org/p/index.php?title=Octave_Mirbeau&oldid=1087852
Categories:
Hidden category:
This page was last edited on 17 November 2022, at 23:51.
Content is available under Creative Commons Attribution/Share-Alike License; additional terms may apply. See Terms of Use for details.