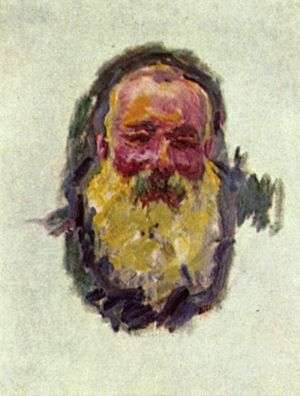 Claude Monet also known as Oscar-Claude Monet or Claude Oscar Monet (November 14, 1840 – December 5, 1926) was a French Impressionist painter. The term Impressionism, which came to describe the prominent art movement of the late nineteenth century, is derived from the title of his painting Impression, Sunrise. Monet's famous "water lilies" paintings are among the most famous paintings not only of his era, but in world history. The impressionists completely altered the landscape of art, introducing new techniques, but their approach to painting was even more radical. They completely broke with prevailing notions of representation, playing with light and color in an attempt to mimic sense impressions. This break with representation would come to define not only modern art, but the high culture of Modernism in all its manifestations, including literature, the plastic arts, and even architecture. The break with representation would have a profound effect on modern aesthetics, leading to cubism, constructivism (art), and many other movements.

Monet was born to Adolphe and Louise-Justine Monet, both of them second-generation Parisians, of 90 Rue Laffitte, in the 9th arrondissement of Paris, but his family moved in 1845 to Le Havre in Normandy when he was five. He was christened as Oscar-Claude at the church of Notre-Dame-de-Lorette. His father wanted him to go into the family (grocery store) business, but Claude Monet wanted to become an artist. His mother was a singer.

On the April 1, 1851 Monet entered the Le Havre secondary school. He first became known locally for his charcoal caricatures, which he would sell for ten to twenty francs. Monet also undertook his first drawing lessons from Jacques-Francois Ochard, a former student of the great revolutionary artist, Jacques-Louis David (1748–1825). On the beaches of Normandy in about 1856, he met fellow artist Eugène Boudin, who became his mentor and taught him to use oil paints. Boudin taught Monet en plein air (outdoor) techniques for painting.

On January 28, 1857 his mother died. Now 16 years old, he left school and his widowed, childless aunt Marie-Jeanne took him into her home.

When Monet traveled to Paris to visit The Louvre, he witnessed painters copying from the old masters. Monet, having brought his paints and other tools with him, would instead go and sit by a window and paint what he saw. Monet was in Paris for several years and met several friends who were painters. They all painted in the impressionist style. One of those friends was Édouard Manet.

In June 1861 Monet joined the First Regiment of African Light Cavalry in Algeria for two years of a seven-year commitment, but contracted typhoid. His aunt Madame Lecadre intervened to get him out of the army if he agreed to complete an art course at a university. It is possible that the Dutch painter Johan Barthold Jongkind, whom Monet knew, may have prompted his aunt on this matter. Disillusioned with the traditional art taught at universities, in 1862 Monet was a student of Charles Gleyre in Paris, where he met Pierre-Auguste Renoir, Frederic Bazille, and Alfred Sisley. Together they shared new approaches to art, painting the effects of light en plein air with broken color and rapid brushstrokes, in what later came to be known as Impressionism.

Monet's 1866 Camille or The Woman in the Green Dress (La Femme à la Robe Verte), which brought him recognition, was one of many works featuring his future wife, Camille Doncieux. Shortly thereafter Doncieux became pregnant and bore their first child, Jean. In 1868, Monet attempted suicide.

During the Franco-Prussian War (1870–1871), Monet took refuge in England to avoid the conflict. While there he studied the works of John Constable and Joseph Mallord William Turner, both of whose landscapes would serve to inspire Monet's innovations in the study of color.

From 1871 to 1878 Monet lived at Argenteuil, a village on the Seine near Paris, and here he painted some of his best known works. 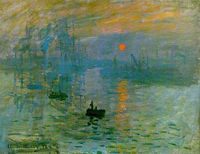 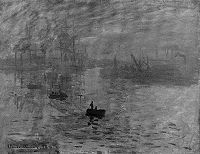 Impression, Sunrise (Impression, soleil levant) is the painting for which the Impressionist movement was named. He painted it upon returning to France. It hung in the first Impressionist exhibition in 1874 and is now displayed in the Musée Marmottan-Monet, Paris.

Dated 1872, but probably created in 1873, its subject is the harbor of Le Havre, using very loose brush strokes that suggest rather than delineate it. Monet explained the title later: "I was asked to give a title for the catalogue; I couldn't very well call it a view of Le Havre. So I said: 'Put Impression.'"

It was displayed in 1874 during the first independent art show of the Impressionists (who were not yet known by that name). Critic Louis Leroy, inspired by the painting's name, titled his hostile review of the show in Le Charivari newspaper, "The Exhibition of the Impressionists", thus inadvertently naming the new art movement. He wrote:

Impression — I was certain of it. I was just telling myself that, since I was impressed, there had to be some impression in it … and what freedom, what ease of workmanship! Wallpaper in its embryonic state is more finished than that seascape.

An interesting detail about the painting is that the color of the sun has almost exactly the same luminance as that of the sky — which is, of course, not true to nature. This detail however seems to add an eerie quality to the sun's appearance in the painting, making it stand out against the background sky much more prominently than it would have in a more realistic rendering.

Alice Hoschedé decided to help Monet by bringing up his two children together with her own. They lived in Poissy. In April 1883 they moved to a house in Giverny, Eure, in Haute-Normandie, where he planted a large garden which he painted for the rest of his life. Monet and Alice Hoschedé married in 1892. 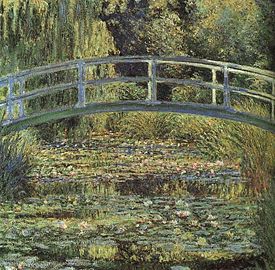 Monet was exceptionally fond of painting controlled nature: his own garden in Giverny, with its water lilies, pond, and bridge. He also painted up and down the banks of the Seine.

Between 1883 and 1908, Monet traveled to the Mediterranean Sea, where he painted landmarks, landscapes, and seascapes, such as Bordighera. He painted an important series of paintings in Venice, Italy, and in London he painted two important series — views of Parliament building and views of Charing Cross Bridge. His wife Alice died in 1911 and his son Jean died in 1914. During World War I Monet painted a series of weeping willow trees as homage to the French fallen soldiers. Cataracts formed on Monet's eyes, for which he underwent two surgeries in 1923. The paintings done while the cataracts affected his vision have a general reddish tone, which is characteristic of the vision of cataract victims. It may also be that after surgery he was able to see certain ultraviolet wavelengths of light that are normally excluded by the lens of the eye[1]; this may have had an effect on the colors he perceived. After his operations he even repainted some of these paintings.

Monet died December 5, 1926 at the age of 86 and is buried in the Giverny church cemetery. His famous home and garden with its water lily pond and bridge at Giverny are a popular drawing card for tourists. In the house there are many examples of Japanese woodcut prints on the walls.

Today, Monet is seen as one of the greatest artists in the history of art. Chu (2003) summarizes the impact that Monet’s works can have on the viewer and why Monet is seen as a master of painting.

Seen up close…they are nothing but dabs of oil paint hastily applied to a canvas. Yet when one steps away from the painting a miraculous thing happens: as the strokes and colors blend in the viewer’s eye, one suddenly sees the rippling of the water, the vibrations of the air, and the gentle movement of the smoke from the stacks mixing with the fog. Thus, paradoxically, the same picture that reminds the viewer that a painting is nothing but a mass of brushstrokes on a flat canvas surpasses earlier landscape paintings in its powerful evocation of the shimmering effect of light and atmosphere.[2]

Retrieved from https://www.newworldencyclopedia.org/p/index.php?title=Claude_Monet&oldid=1095551
Categories:
Hidden category:
This page was last edited on 14 January 2023, at 07:22.
Content is available under Creative Commons Attribution/Share-Alike License; additional terms may apply. See Terms of Use for details.