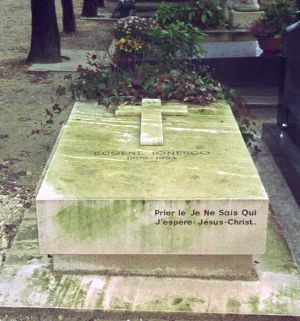 Ionesco's grave in Montparnasse cemetery, Paris. The incription translates: Pray to the I don't-know-who: Jesus Christ, I hope

Eugène Ionesco, born Eugen Ionescu, (November 26, 1909 – March 29, 1994) was a French-Romanian playwright and dramatist, one of the foremost playwrights of the Theater of the Absurd. Theater of the Absurd (French: "Le Théâtre de l'Absurde") is a designation for particular plays written by a number of primarily European playwrights in the late 1940s, 1950s, and 1960s, as well as to the style of theatre which has evolved from their work. The term was coined by the critic Martin Esslin, in his groundbreaking work, The Theater of the Absurd. Esslin saw the work of these playwrights as giving artistic articulation to Albert Camus' philosophy that life is inherently without meaning, and so one must find one's own meaning as Camus illustrates in his work The Myth of Sisyphus.

The 'Theatre of the Absurd' is thought to have its origins in Dada, nonsense poetry and avant-garde art of the 1910s – 1920s. Despite its critics, this genre of theater achieved popularity when World War II highlighted the essential precariousness of human life. Like the "Lost Generation" after World War I, many writers struggled to resolve the conflict between their hopes and belief in human progress, and the obvious horror of both the war and the militarism and other evils that led up to it. This essential "absurdity" of modern life led writers like Ionesco to ridicule it. Beyond ridiculing the most banal situations, Ionesco's plays depict in a tangible way the solitude of humans and the insignificance of one's existence in the modern world.

Ionesco was born on November 26, 1909, in Slatina, Romania, to a Romanian father and a mother of French and Greek-Romanian heritage[1]. Eugène's father was of the Orthodox religion. Ionesco's maternal grandmother was Greek-Orthodox but she converted to the religion of her husband, Protestantism, and Eugène's mother was raised a Protestant. Eugène himself was baptised into the Romanian Orthodox religion. Many sources cite his birthdate as 1912. This error was due to Ionesco's vanity [2]. He spent most of his childhood in France, but returned to Romania with his father in 1925 after his parents divorced. There he attended Saint Sava National College, after which he studied French Literature at the University of Bucharest from 1928 to 1933 and qualified as a teacher of French. While there he met Emil Cioran and Mircea Eliade, the three becoming lifelong friends.

In 1936 Ionesco married Rodica Burileanu. Together they had one daughter for whom he wrote a number of unconventional children's stories. He and his family returned to France in 1938 for him to complete his doctoral thesis. Caught by the outbreak of World War II in 1939, he remained there, living in Marseille during the war before moving with his family to Paris after its liberation in 1944.

Ionesco was made a member of the Académie français in 1970 [1]. He also received numerous awards including Tours Festival Prize for film, 1959; Prix Italia, 1963; Society of Authors Theatre Prize, 1966; Grand Prix National for theatre, 1969; Monaco Grand Prix, 1969; Austrian State Prize for European Literature, 1970; Jerusalem Prize, 1973; and honorary doctorates from New York University and the universities of Leuven, Warwick and Tel Aviv. Eugène Ionesco died at age 84 on March 29, 1994, and is buried in the Cimetière du Montparnasse, in Paris. Although Ionesco wrote almost entirely in French, he is one of Romania's most honored artists.

The origins of his first play

Like Samuel Beckett, Ionesco came to the theater late: he did not write his first play until 1948 (La Cantatrice chauve, first performed in 1950 with the English title The Bald Soprano). At the age of 40 he decided to learn English using the Assimil method, conscientiously copying whole sentences in order to memorize them. Re-reading them, he began to feel that he was not learning English, rather he was discovering some astonishing truths such as the fact that there are seven days in a week, that the ceiling is up and the floor is down; things which he already knew, but which suddenly struck him as being as stupefying as they were indisputably true.

This feeling only intensified with the introduction in later lessons of the characters known as "Mr. and Mrs. Smith." To his astonishment, Mrs. Smith informed her husband that they had several children, that they lived in the vicinity of London, that their name was Smith, that Mr. Smith was a clerk, that they had a servant, Mary, who was English like themselves. What was remarkable about Mrs. Smith, he thought, was her eminently methodical procedure in her quest for truth. For Ionesco, the clichés and truisms of the conversation primer disintegrated into wild caricature and parody with language itself disintegrating into disjointed fragments of words. Ionesco set about translating this experience into a play, La Cantatrice Chauve, which was performed for the first time in 1950 under the direction of Nicolas Bataille. It was far from a success and went unnoticed until a few established writers and critics, among them Jean Anouilh and Raymond Queneau, championed the play.

Ionesco's earliest works, and his most innovative, were one-act nonsense plays: La Cantatrice chauve (1950), La Leçon (1951), Les Chaises (1952), and Jacques ou la Soumission (1955). These absurdist sketches, to which he gave such descriptions as "anti-play" (anti-pièce in French) express modern feelings of alienation and the impossibility and futility of communication with surreal comic force, parodying the conformism of the bourgeoisie and conventional theatrical forms. In them Ionesco rejects a conventional story-line as their basis, instead taking their dramatic structure from accelerating rhythms and/or cyclical repetitions. He disregards psychology and coherent dialogue, thereby depicting a dehumanized world with mechanical, puppet-like characters who speak in non-sequiturs. Language becomes rarefied, with words and material objects gaining a life of their own, increasingly overwhelming the characters and creating a sense of menace.

With Tueur sans gages (The Killer, 1959); his second full-length play, the first being Amédée, ou Comment s'en débarrasser in 1954), Ionesco began to explore more sustained dramatic situations featuring more humanized characters. Notably this includes Bérenger, a central character in a number of Ionesco's plays, the last of which is Le Piéton de l'air.

Bérenger is a semi-autobiographical figure expressing Ionesco's wonderment and anguish at the strangeness of reality. He is comically naïve, engaging the audience's sympathy. In Tueur sans gages he encounters death in the figure of a serial killer. In Rhinocéros he watches his friends turning into rhinoceri one by one until he alone stands unchanged against this tide of conformism. It is in this play that Ionesco most forcefully expresses his horror of ideological conformism, inspired by the rise of the fascist Iron Guard in Romania in the 1930s. Le Roi se meurt (1962) shows him as King Bérenger 1st, an everyman figure who struggles to come to terms with his own death.

Apart from the libretto for the opera Maximilien Kolbe (music by Dominique Probst) which has been performed in five countries, filmed for television and recorded on CD, Ionesco did not write for the stage after Voyage chez les morts in 1981. However, The Bald Soprano is still playing at the Théâtre de la Huchette today, having moved there in 1952.

Like Shaw and Brecht, Ionesco also contributed to the theater with his theoretical writings (Wellwarth, 33). Ionesco wrote mainly in an attempt to correct critics who he felt misunderstood his work and therefore wrongly influenced his audience. In doing so, Ionesco articulated ways in which he thought contemporary theater should be reformed (Wellwarth, 33). Notes and Counter Notes is a collection of Ionesco's writings, including musings on why he chose to write for the theater and direct responses to his contemporary critics.

In the first section, titled "Experience of the Theatre," Ionesco claimed to have hated going to the theater as a child because it gave him "no pleasure or feeling of participation" (Ionesco, 15). He wrote that the problem with realistic theater is that it is less interesting than theater that invokes an "imaginative truth," which he found to be much more interesting and freeing than the "narrow" truth presented by strict realism (Ionesco, 15). He claimed that "drama that relies on simple effects is not necessarily drama simplified" (Ionesco, 28).

According to Esslin, Ionesco is one of the four defining playwrights of the movement, along with Samuel Beckett, Jean Genet, and Arthur Adamov, although each of these writers has entirely unique preoccupations and techniques that go beyond the term "absurd." In practice, The Theater of the Absurd departs from realistic characters, situations and all of the associated theatrical conventions. Time, place and identity are ambiguous and fluid, and even basic causality frequently breaks down. Meaningless plots, repetitive or nonsensical dialogue and dramatic non-sequiturs are often used to create dream-like, or even nightmarish moods. Of course, the careful and artful use of chaos and non-realistic elements and a literary device.

The New York based theater company Untitled Theater Company #61 purports to present a "modern theater of the absurd," consisting of new plays in the genre and classic plays interpreted by new directors. Among their projects was the Ionesco Festival, a festival of the complete works of Ionesco, and the Havel Festival, the complete works of Václav Havel.

Wikiquote has a collection of quotations related to:
Eugène Ionesco

Retrieved from https://www.newworldencyclopedia.org/p/index.php?title=Eugène_Ionesco&oldid=1069185
Categories:
Hidden category:
This page was last edited on 17 May 2022, at 06:32.
Content is available under Creative Commons Attribution/Share-Alike License; additional terms may apply. See Terms of Use for details.