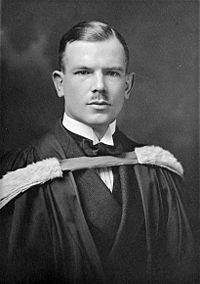 Dr. Norman Bethune at his graduation, 1916

Henry Norman Bethune, MD, known as "Bai Qiuen" (白求恩) in Chinese, (March 4, 1890 – November 12, 1939) was a Canadian physician, medical innovator, and humanitarian. He is most famous for his work in China, and his humanitarian work contributed to the relationship between Canada and China.

His own experiences of being wounded by shrapnel in World War I, and recovering from pulmonary tuberculosis as a young man, gave him a deep sense of compassion for the sick and unfortunate. In Canada, he observed that his poorest patients often became sick again because of their unhealthy living conditions, and campaigned for socialized medicine. He became an outstanding thoracic surgeon. Between 1929 and 1936, Bethune invented or redesigned 12 medical and surgical instruments, and wrote fourteen articles describing his innovations in thoracic surgical technique. He became increasingly disillusioned with surgical treatment and concerned with the socioeconomic aspects of disease. After a visit to the Soviet Union in 1935, Bethune joined the Communist Party.

In 1936, he went to Madrid to lead the Canadian Medical Unit during the Spanish Civil War. In 1938, Bethune went to China to aid the Chinese Red Army in their war with Japan, performing battlefield surgical operations on war casualties. He worked with carpenters and blacksmiths to forge new surgical tools, and established training for doctors, nurses, and orderlies. Bethune died in China in 1939 of blood poisoning. A number of schools have been named for him, and monuments in both China and Canada commemorate his selfless service to humanity.

The son of Christian missionaries, Henry Norman Bethune was born on March 4, 1890, in Gravenhurst, Ontario, Canada. His grandfather, Norman Bethune, Sr., was also a noted Canadian physician and founder of one of the first medical schools in Toronto. Norman’s father, the Rev. Malcolm Nicolson Bethune, led an uneventful life as a small town pastor.

As a youth, Norman Bethune attended Owen Sound Collegiate Institute in Owen Sound, Ontario, now known as Owen Sound Collegiate and Vocational Institute (OSCVI). He graduated from OSCVI in 1907. In September 1909 he enrolled at the University of Toronto. After completing his medical studies at the University of Toronto, in the midst of which he worked for a year as a laborer-teacher with Frontier College, Bethune moved to Montreal where he was associated with McGill University and taught thoracic surgery. Bethune was an early proponent of universal health care, the success of which he observed during a visit to the Soviet Union. As a doctor in Montreal, Bethune frequently sought out the poor and gave them free medical care.

In 1915, during the First World War, he joined the No. 2 Field Ambulance Medical Corps in France, where, as a stretcher-bearer in Ypres, he was hit by shrapnel and spent three months recovering in an English hospital. Afterwards, Bethune continued his studies at the University of Toronto, and re-enlisted as a surgeon in the British navy, spending the last six months of the war as a medical officer with Canadian airmen in France.

In 1916, he received his medical degree and completed postgraduate training in Britain. He entered private practice in Detroit, Michigan, but in 1926 he became ill and was found to have contracted pulmonary tuberculosis. He left Detroit and went to Calydor Sanitorium in Gravenhurst, Ontario. His wife, Frances, was determined to stay by his side, but Bethune believed his death was inevitable and demanded a divorce because he did not want to waste her time. She returned to her home in Scotland, but they continued to correspond frequently and remained close.

Bethune was admitted to the Trudeau Sanatorium at Saranac Lake, New York. There, he read about a new and controversial treatment for tuberculosis, compression therapy, or artificial pneumothorax, in which air was inserted into the chest in order to collapse one lung, either permanently or temporarily. Only 13 doctors in the world were experienced in this technique; one of them, Dr. Archibald, was practicing in Montreal. Bethune insisted on receiving compression therapy at Trudeau Sanatorium. His left lung was compressed; he recovered his health, and went to Montreal to study thoracic surgery under Dr. Archibald.

From 1928 to 1936, Bethune devoted himself to other tuberculosis victims and to thoracic surgery in Montréal at the Royal Victoria Hospital, and later at the Hôpital du Sacré-Coeur, Cartierville, Québec. Although he successfully cured hundreds of cases of tuberculosis, many of his patients became ill again when they returned to crowded, unsanitary living conditions. Bethune thought the medical system should provide the same level of care for everyone, and collaborated with other health care advocates in developing a plan for socialized medicine. When they presented their plan to the government, it provoked a strong negative reaction, and Bethune became unpopular in medical circles because of his radical ideas.

For the remaining years of his life Bethune traveled to the battlefields of Spain and China, using his surgical skills and medical knowledge to aid the wounded.

Bethune died at the age of 49 on November 12, 1939, of blood poisoning from a cut he received when performing surgery, while with the Communist Party of China's Eighth Route Army in the midst of the second Sino-Japanese War.

Did you know?
In his lifetime Norman Bethune was virtually unknown in his homeland of Canada but received international recognition when Chairman Mao Zedong wrote about his work in China

Between 1929 and 1936, Bethune invented or redesigned twelve medical and surgical instruments, and wrote fourteen articles describing his innovations in thoracic surgical technique. He became increasingly disillusioned with surgical treatment and concerned with the socioeconomic aspects of disease. After a visit to the Soviet Union in 1935, Bethune joined the Communist Party.[1] When the Spanish Civil War began in 1936, a spokesman from the Committee to Aid Spanish Democracy visited Bethune and asked him to head the Canadian Medical Unit in Madrid. He agreed to go to Spain, and left Canada on November 3, 1936.

In Spain, he organized a mobile blood transfusion service out of Madrid. The service collected blood donations and delivered them to the hospitals and to the wounded on the battlefield. On many occasions, Bethune risked his life to deliver blood to the front line.[2]

Bethune returned to Canada on June 6, 1937, to raise money for the antifascist cause in Spain, and soon turned his attention to the war being waged by communist forces against the Japanese invaders in China. "Spain and China," he wrote, "are part of the same battle."[2]

In 1938, Bethune went to China to aid the Chinese Red Army in their war with Japan, performing battlefield surgical operations on war casualties. He became the Chief Medical Officer of the Red Army and trained thousands of Chinese as medics and doctors. In China, he worked with carpenters and blacksmiths to forge new surgical tools, and established training for doctors, nurses, and orderlies. He redesigned packing containers to serve as operating tables.[3] He also treated wounded Japanese prisoners. 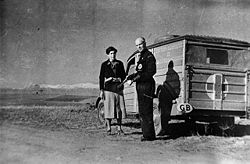 Canadian Blood Transfusion Unit which operated during the Spanish Civil War. Dr. Norman Bethune is at the right. ca. 1935 - 1937 / Spain

The Communist Party of Canada (CPC) asserts that Bethune, who joined the party in 1935, acted out of devotion to the Chinese socialist movement. Some in the West, however, have been highly skeptical of this notion and generally believe the doctor's motivation was exclusively based on humanitarian considerations.

The fact remains that Bethune went to Spain soon after joining the Communist Party of Canada to help in the struggle against fascism, and then went to China to help the Communists there against Japanese imperialism. It is also noted in his biography, The Politics of Passion, by Larry Hannant, that he specifically refused to work under Chiang Kai Shek's Nationalist government and insisted on helping the Chinese Communists instead. He is one of the few Westerners to have a statue in his memory in Communist China, and also has a hospital and a medical school named in his honor.

Virtually unknown in his homeland during his lifetime, Bethune received international recognition when Chairman Mao Zedong of the People's Republic of China published his essay entitled In Memory of Norman Bethune (in Chinese: 紀念白求恩), which documented the final months of the doctor's life in China. Mao made the essay required reading for the entire Chinese population. Mao concluded in that essay: We must all learn the spirit of absolute selflessness from him. With this spirit everyone can be very helpful to each other. A man's ability may be great or small, but if he has this spirit, he is already noble-minded and pure, a man of moral integrity and above vulgar interests, a man who is of value to the people.

Statue of Bethune in Montreal

Bethune University of Medical Sciences in Changchun, Bethune College at York University, and Dr Norman Bethune Collegiate Institute (a secondary school) in Scarborough, Ontario, were named after Dr. Bethune. Heroic statues of Bethune have been erected throughout China.

The Canadian government purchased his father's and his neighbor's house in Gravenhurst and restored the houses into the Bethune Memorial House in 1976. The house is a National Historic Site of Canada. In August, 2002, then Governor General Adrienne Clarkson, who has Chinese ancestry, visited the house and unveiled a bronze statue of him.

Montreal created a public square and erected a statue in his honor, near Guy-Concordia metro station.

Bethune improved upon a number of surgical instruments. His most famous instrument was the "Bethune Rib Shears," which is still in use today.[4]

Dr. Bethune (Chinese: 白求恩大夫), one of the most successful Chinese movies, was made in his memory in 1964 with Gerald Tannebaum (Traditional Chinese: 譚寧邦; Simplified Chinese: 谭宁邦; pinyin: Tán Níngbāng), an American humanitarian, playing Bethune. His life has also been the subject of two biographical films in which Donald Sutherland played Bethune: Bethune (1977), made for television on a low budget, and Bethune: The Making of a Hero (1990), a co-production of Telefilm Canada, the Canadian Broadcasting Corporation, FR3 TV France and China Film Co-production.

In March 1990, to commemorate the centenary of Bethune’s birth, Canada and China each issued two postage stamps of the same design in his honor. In 1998, he was inducted into the Canadian Medical Hall of Fame.

In the CBC's The Greatest Canadian program in 2004, he was voted the "26th Greatest Canadian" by viewers. In 2006, China Central Television produced a 20-part drama series, Dr Norman Bethune, documenting his life, which with a budget of Yuan 30 million (US$3.75 million) was the most expensive Chinese TV series to date.[5]

He is buried in Shijiazhuang, Hebei Province, China, where his tomb along with that of Dr. Dwarkanath Kotnis lie next to great memorials and statues in their honor.