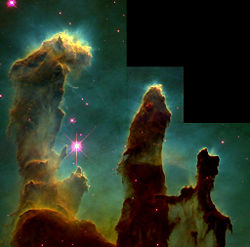 The "Pillars of Creation" from the Eagle Nebula.

A nebula (pl. nebulae, nebulæ, or nebulas; derived from the Latin word for "mist" or "cloud"[1]) is an interstellar cloud of dust, hydrogen gas, and plasma. Originally, the term nebula was a general name for any extended astronomical object, including galaxies beyond the Milky Way. For example, the Andromeda Galaxy was once referred to as the Andromeda Nebula before galaxies were discovered by Edwin Hubble. Many nebulae (known as diffuse nebulae) have poorly defined boundaries; others (such as planetary nebulae) may be described as discrete objects with identifiable boundaries.

Nebulae often contain star-forming regions, as observed in the Eagle Nebula, depicted in NASA's famous image known as the Pillars of Creation. In these regions, the formations of gas, dust, and other materials "clump" together to form larger masses, which attract further matter and eventually become large enough to form stars. The remaining materials are then believed to form planets and other objects similar to those in the Solar System. 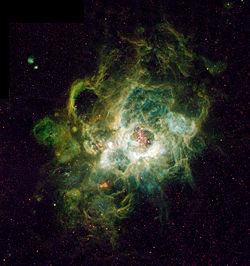 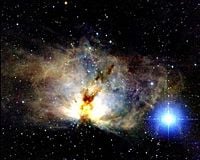 Many nebulae are formed during the gravitational collapse of diffuse gases in the interstellar medium (ISM). As the material collapses under its own weight, massive stars may form in the center, and their ultraviolet radiation ionizes the surrounding gas, making it visible at optical wavelengths. Examples of this type of nebula are the Rosette Nebula and the Pelican Nebula. These nebulae vary in size, depending on the size of the original cloud of gas. The number of stars formed can vary as well. At the sites of star formation, the newly formed stars are sometimes known as young, loose clusters.

Some nebulae are formed as a consequence of supernova explosions, which are the death throes of massive, short-lived stars. The material thrown off from the supernova explosion is ionized by the supernova remnant. One of the best examples of this is the Crab Nebula, in Taurus. It is the result of a supernova recorded in the year 1054, and the center of the nebula contains a neutron star, created during the explosion.

Other nebulae may form as planetary nebulae (discussed below). This is the final stage of the life of a low-mass star, such as our Sun. Stars that have a mass of up to 8-10 solar masses evolve into red giants and slowly lose their outer layers during pulsations in their atmosphere. When a star has lost a sufficient amount of material, its temperature increases and the ultraviolet radiation it emits is capable of ionizing the surrounding nebula.[2]

The Omega Nebula, an example of an emission nebula.

The Pleiades. The diffuse nebulae near the stars are examples of reflection nebula.

Most nebulae can be described as diffuse nebulae, which means that they are extended and have no well-defined boundaries.[3] In visible light, these nebulae may be divided into emission nebulae and reflection nebulae, a categorization that is based on how the light we detect was created.

The Horsehead Nebula, an example of a dark nebula.

Dark nebulae are similar to diffuse nebulae, but they are not seen by their emitted or reflected light. Instead, they are observed as dark clouds in front of more distant stars or in front of emission nebulae.[4]

Although these nebulae appear different at optical wavelengths, they all appear to be bright sources of emission at infrared wavelengths. This emission comes primarily from the dust within the nebulae.[4] 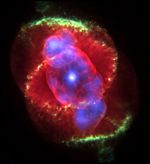 The Cat's Eye Nebula, an example of a planetary nebula.

The name "planetary nebulae" was given because the astronomers who first observed these objects thought that they resembled the disks of planets. However, they are not related to planets at all.[7]

The Red Rectangle Nebula, an example of a protoplanetary nebula.

A protoplanetary nebula (PPN) is an astronomical object that is at the short-lived episode during a star's rapid stellar evolution between the late asymptotic giant branch (LAGB) phase and the subsequent planetary nebula (PN) phase.[8] A PPN emits strong infrared radiation, and it is a kind of reflection nebula. The exact stage when a PPN becomes a planetary nebula (PN) is defined by the temperature of the central star.

The Crab Nebula, an example of a supernova remnant.

A supernova is produced when a high-mass star reaches the end of its life. When nuclear fusion ceases in the core of the star, the star collapses inward on itself and forms a neutron core. The gas falling inward either rebounds or gets so strongly heated that it expands outward from the core, thus causing the star to explode.[4] The expanding shell of gas forms what is called a supernova remnant, a special type of diffuse nebula.[4] Although much of the optical and X-ray emission from supernova remnants originates from ionized gas, a substantial amount of the radio emission is a form of nonthermal emission called synchrotron emission.[4] This latter emission originates from near the core of the remnant as high-velocity electrons move within the magnetic field of the neutron star.[9]