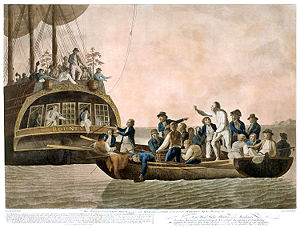 The mutineers turning Lieutenant William Bligh and some of the officers and crew adrift from HMAV Bounty on April 29, 1789

Mutiny is the act of conspiring to disobey an order that a group of similarly-situated individuals (typically members of the military; or the crew of any ship, even if they are civilians) are legally obliged to obey. The term is commonly used for a rebellion among members of the military against their superior officers. During the Age of Discovery, mutiny particularly meant open rebellion against a ship’s captain. This occurred, for example, during Magellan’s journey, resulting in the killing of one mutineer, the execution of another and the marooning of two others, and on Henry Hudson’s Discovery, resulting in Hudson and others being set adrift in a boat.

While there have been cases in which mutinous actions were justified, due to the leader acting in self-centered ways that endangered both the goal and the lives of the group, in many cases the self-centeredness was on the part of the mutineers, and thus mutiny was unjustified. As humankind develops, overcoming the nature of selfishness, and learns to live in harmony working for the benefit of the whole, mutiny becomes unnecessary.

The Royal Navy’s Articles of War have changed slightly over the centuries they have been in force, but the 1757 version is representative—except that the death penalty no longer exists—and defines mutiny thus:

(a) Any person subject to this code (chapter) who—

(1) with intent to usurp or override lawful military authority, refuses, in concern with any other person, to obey orders or otherwise do his duty or creates any violence or disturbance is guilty of mutiny;
(2) with intent to cause the overthrow or destruction of lawful civil authority, creates, in concert with any other person, revolt, violence, or other disturbance against that authority is guilty of sedition;
(3) fails to do his utmost to prevent and suppress a mutiny or sedition being committed in his presence, or fails to take all reasonable means to inform his superior commissioned officer or commanding officer of a mutiny or sedition which he knows or has reason to believe is taking place, is guilty of a failure to suppress or report a mutiny or sedition.

(b) A person who is found guilty of attempted mutiny, mutiny, sedition, or failure to suppress or report a mutiny or sedition shall be punished by death or such other punishment as a court-martial may direct.[2]

Most countries still punish mutiny with particularly harsh penalties, sometimes even the death penalty. Mutiny is typically thought of only in a shipboard context, but many countries’ laws make no such distinction, and there have been a significant number of notable mutinies on land.

The military law of England in early times existed, like the forces to which it applied, in a period of war only. Troops were raised for a particular service, and were disbanded upon the cessation of hostilities. The crown, by prerogative, made laws known as Articles of War, for the government and discipline of the troops while thus embodied and serving. Except for the punishment of desertion, which was made a felony by statute in the reign of Henry VI, these ordinances or Articles of War remained almost the sole authority for the enforcement of discipline.

In 1689 the first Mutiny Act was passed, passing the responsibility to enforce discipline within the military to Parliament. The Mutiny Act, altered in 1803, and the Articles of War defined the nature and punishment of mutiny, until the latter were replaced by the Army Discipline and Regulation Act in 1879. This, in turn, was replaced by the Army Act in 1881.[3]

Section 21(5) of the 1998 Human Rights Act completely abolished the death penalty in the United Kingdom. Previously to this, the death penalty had already been abolished for murder, but it remained in force for certain military offenses, including mutiny, although these provisions had not been used for several decades.[4]

United States military law requires obedience only to lawful orders. Disobedience to unlawful orders is the obligation of every member of the U.S. armed forces, a principle established by the Nuremberg trials and reaffirmed in the aftermath of the My Lai Massacre. However, a U.S. soldier who disobeys an order after deeming it unlawful will almost certainly be court-martialed to determine whether the disobedience was proper. 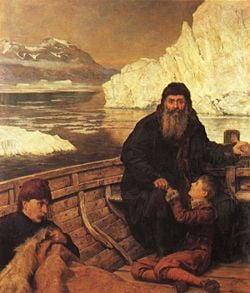 John Collier's painting of Henry Hudson with his son and some crew members after a mutiny on his icebound ship. The boat was set adrift and never heard from again. 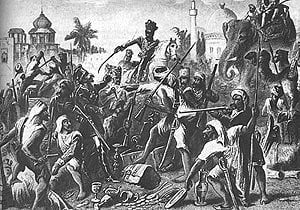 An engraving titled Sepoy Indian troops dividing the spoils after their mutiny against British rule gives a view of events from a British perspective.

While many mutinies were carried out in response to backpay and/or poor conditions within the military unit or on the ship, some mutinies, such as the Connaught Rangers mutiny and the Wilhelmshaven mutiny, were part of larger movements or revolutions.

In times and cultures where power "comes from the barrel of a gun," rather than through a constitutional mode of succession (such as hereditary monarchy or democratic elections), a major mutiny, especially in the capital, often leads to a change of ruler, sometimes even a new regime, and may therefore be induced by ambitious politicians hoping to replace the incumbent. In this fashion, many Roman emperors seized power at the head of a mutiny or were put on the throne after a successful one.

Mutinies are dealt with harshly because of the emphasis on discipline and obedience in most militaries. Soldiers are often punished by death for disobeying orders to set an example to others. The underlying fear is that soldiers will disobey orders in the heat of battle, thereby jeopardizing entire groups of troops. On board a ship at sea the safety of all depends upon the united efforts of the crew, and the captain is the agreed upon leader. Disobeying the captain's orders thus risks the life of all. Preventing this occurrence is considered paramount, justifying the harsh penalties.

Although committing a mutiny is seen as being on par with treason, mutinies can sometimes be justified. Soldiers are typically only obliged to execute orders within the scope of law. Soldiers ordered to commit crimes are entitled to disobey their superior officers. Examples of such orders would be the killing of unarmed opponents or civilians, or the use of rape as a weapon of war.