Kilimanjaro with its three volcanic cones, Kibo, Mawensi, and Shira, is an inactive stratovolcano in north-eastern Tanzania. Although it does not have the highest elevation, Kilimanjaro is the tallest free-standing mountain rise in the world, rising 4,600 m (15,100 ft) from its base, and includes the highest peak in Africa at 19,340 feet (5,895 meters), providing a dramatic view from the surrounding plains.

It is unknown where the name Kilimanjaro originated, but a number of theories exist. European explorers had adopted the name by 1860 and reported it as its Swahili name, assuming that Kilimanjaro breaks up into Kilima, Swahili for "hill" or "little mountain," and Njaro, understood to be Swahili for "white"' or for "shining." The The Nuttall Encyclopædia of 1907 contains the following definition: "Kilima-Njaro, a volcanic mountain group, 19,000 ft. high, on the northern border of German East Africa, 170 m. from the coast, with two peaks, Kibo and Kimawenzi; in 1894 an Austrian communistic settlement was established on the slopes."

Others believe its origin to be from the Kichagga language word jaro meaning caravan. It is unknown, however, why the diminutive kilima is used instead of the proper word for mountain, mlima. It is conceived that an early European visitor, whose knowledge of the Swahili language was limited, changed mlima to kilima by analogy with the two Chagga names—Kibo and Kimawenzi.

Another theory is that Kilimanjaro comes from the Kichagga word kilemanjaare or kilemajyaro meaning "that which defeats the bird/leopard/caravan." However this theory can't explain the fact that the name Kilimanjaro was not used in Kichagga before European exploration in the mid-1800s.[1]

In the 1880s the mountain, called Kilimandscharo in German, became a part of German East Africa after Karl Peters had persuaded local chiefs to sign treaties. In 1889 Uhuru Peak on Kibo was named Kaiser-Wilhelm-Spitze, which was used in the German Empire until its defeat in 1918, when the territory became British-administered Tanganyika and the name was dropped.

Kilimanjaro is 212 miles (340 km) south of the Equator, 174 miles (280 km) from the Indian Ocean and just over 249 miles (400 km) from Lake Victoria. It lies on the eastern side of the eastern branch of the Great Rift Valley, and north-north east of the Maasai steppe, the great plain of northeastern Tanzania renowned as the homeland of the nomadic Maasai cattle-herders.

Principal human habitation lies on the southern and eastern slopes of Kilimanjaro, where the fertile and well-watered soil supports farming, especially of horticultural crops by the Chaga people. The city of Moshi, just over 19 miles (30 km) from the summit, is the main urban center and has paved highway and rail connections to the Tanzanian coast at Tanga and Dar es Salaam. The area's tourist industry is served by Kilimanjaro International Airport.

The grasslands exploited by the Maasai extend west and north of Kilimanjaro into Kenya as far as Nairobi, 124 miles (200 km) north-northwest. The Kenyan border runs along the lower slopes of the mountain on the northeastern and eastern sides, only 12 miles (20 km) from the summit. Amboseli National Park in Kenya reaches to the lower slopes on the northern side, while the hot dry savanna plains of Tsavo National Park, also in Kenya, are farther east.

These extensive plains surrounding the mountain have an elevation of 3600-4594 feet (1100–1400 m) except in Tsavo, which is lower at 2625 feet (800 m). The only other nearby highlands are a chain of hills running southeast to the coast where they are called the Usambara Mountains, and 30 miles (50 km) to the west-southwest is another isolated volcanic mountain, Mt Meru, above the city of Arusha. 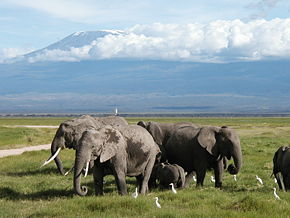 Kilimanjaro's middle and lower slopes receive more rain than the surrounding plains. The southern slopes are the wettest, feeding the Pangani River which has formed a valley flowing south-southwest, parallel to the Usambara Mountains. To the east streams feed the Galana River. The northern slopes drain into the seasonal Lake Amboseli and Kiboko River. Streams on the southwestern side join the Pangani.

Kilimanjaro's prominence above the surrounding plains and frequent clear skies enable it to be seen from the south, west and north from as much as 124 miles (200 km) away—it can often be seen from Nairobi. Although no hills block the view of the mountain from the east, the humid Indian Ocean coast is usually cloudy and hazy. Coastal towns such as Mombasa and Malindi, 174 and 186 miles (280 and 300 km) away, are too far and too cloudy for Kilimanjaro to be seen from; although Arabs and Europeans had visited these towns for centuries, the mountain was not known to them until the nineteenth century. 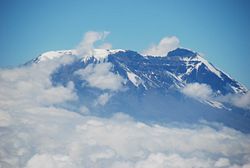 Mount Kilimanjaro from the air. 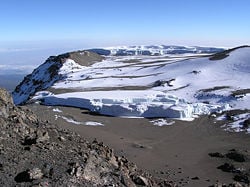 The rapidly retreating Furtwängler Glacier is near the summit. 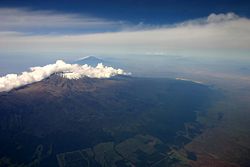 Mount Kilimanjaro seen from the air, with Mt Meru beyond.

The Kilimanjaro mountain system extends in the east-west direction for approximately 50 miles (80 km). It consists of three principal extinct volcanoes: Mawensi on the east, Kibo in the center, and Shira on the western section of the massif.

As the highest point in Africa, Uhuru Peak is one of the Seven Summits. Mawensi is the third highest peak in Africa, after Mount Kenya. Mawensi's cone, which has semipermanent ice patches and substantial seasonal snow, is highly eroded and gorged.

The dome of Kibo retains a permanent ice cap, the only one of the three which does. It also contains a 1.2 mile wide crater on its southern side. While it is inactive, Kilimanjaro has fumaroles that emit gas in the crater. Scientists concluded in 2003 that molten magma is just 1,300 ft below the summit crater. Several collapses and landslides have occurred on Kibo in the past, one creating the area known as the western breach. Although there is no recorded history of eruptions, local legend speaks of activity around 170 years ago.

Mount Kilimanjaro National Park was established in 1973 to protect the mountain above the tree line as well as the six forest corridors that extend downslope through the montane forest belt. The park was designated a UNESCO World Heritage site in 1987.

A succession of vegetation zones include:

Large animals roam the forested southern slopes, including buffalo, antelope, and elephants. There are also a host of monkeys and bird species.

German missionaries Johann Ludwig Krapf and Johannes Rebmann are the first known Europeans to report sighting Kilimanjaro, though there had been rumors of the "snow-capped peak in close proximity to the equator." The summit of Kibo was first mastered by German geographer Hans Meyer and the Austrian mountaineer Ludwig Purtscheller.[2]

While the volcano appears to be dormant on the inside, events on top of the mountain draw global attention. The top of the mountain has seen a retreat of the most recent covering of glaciers, with the most recent ice cap volume dropping by more than 80 percent. In 2002, a study led by an Ohio State University ice core paleoclimatologist predicted that ice on top of Africa's tallest peak would be gone between 2015 and 2020.[3] In 2007, a team of Austrian scientists from University of Innsbruck predicted that the plateau ice cap will be gone by 2040, but some ice on the slope will remain longer due to local weather conditions.[4] A comparison of ice core records suggests conditions today are returning to those of 11,000 years ago. A recent study by the University of Washington in the United States and Georg Kaser of the University of Innsbruck in Austria indicates that the shrinking of Kilimanjaro's ice cap is not due to global warming but instead driven by solar radiation.

As of January 2006, the Western Breach route had been closed by the Tanzanian government following a rockslide which killed four people at Arrow Glacier Camp. The rockslide is believed to have been caused by frost action in an area which is no longer permanently frozen.

After the Western Breach route was closed in January 2006, many expeditions that had intended to use this route have instead used the Lemosho/Barafu route. As the Western Breach route, this route starts to the west and goes up the Shira Ridge towards Lava Tower. Instead of going up to Arrow Glacier camp and the breach, however, this route goes around the southern edge of Kili towards Barafu Camp. From Barafu Camp, around 15,200 ft (4,630 m) altitude, a nighttime summit is usually attempted. 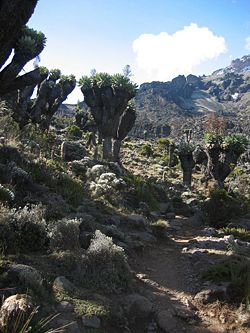 Garden of the Senecias, with part of Kibo in the background.

There are several routes officially sanctioned for climbing Kilimanjaro. These are:

The Machame route as of 2006 is described here. The route is typically done on a six or seven day hike.

The campsites and gates (with corresponding elevations) are as follows:

National Parks in the Kilimanjaro area

Retrieved from https://www.newworldencyclopedia.org/p/index.php?title=Mount_Kilimanjaro&oldid=985565
Categories:
Hidden category:
This page was last edited on 26 November 2014, at 20:46.
Content is available under Creative Commons Attribution/Share-Alike License; additional terms may apply. See Terms of Use for details.