Mount Hood (known as Wy'east to the Multnomah tribe), is a stratovolcano in the Cascade Volcanoes Arc in northern Oregon state, in the Pacific Northwest region of the United States. It is located about 50 miles (80 km) east-southeast of the city of Portland, on the border between Clackamas and Hood River Counties. Mount Hood's snow-covered peak rises to 11,249 feet (3,429 meters) and is home to twelve glaciers. It is the highest mountain in Oregon and the fourth-highest in the Cascade Range.

The area surrounding Mount Hood is known as "The Hood Territory" and is part of the nearly 1.2 million acre Mount Hood National Forest, which contains 189,200 acres of designated wilderness area and more than 1,200 miles of hiking trails.

Mount Hood was given its present name on October 29, 1792, by Lt. William Broughton, a member of Captain George Vancouver's discovery expedition. It was named after a British admiral, Samuel Hood.

The Multnomah tribe's name for Mount Hood is "Wy'east." Legend has it that the name Wy'east comes from a chief of the Multnomah tribe. The chief competed for the attention of a woman who was also loved by the chief of the Klickitat Tribe. The anger that the competition generated led to their transformations into volcanoes, with the Klickitat chief becoming nearby Mount Adams (in neighboring Washington state) and the target of their affection becoming Mount Saint Helens. Their battle was said to have destroyed the Bridge of the Gods, a 200 foot high landslide that crossed the Columbia River approximately 300 years ago, thus creating the great cascades of the Columbia River,[4] after which the Cascade Mountain Range was named. 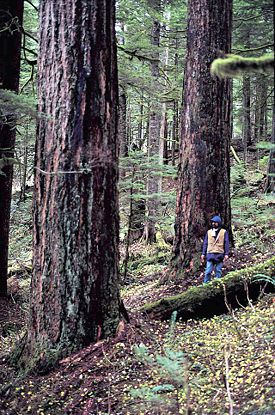 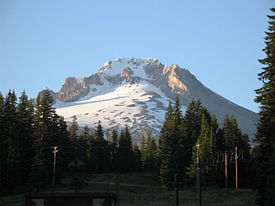 Mount Hood seen from the south. Crater Rock, the remnants of a 200-year-old lava dome, is visible just below the summit.

Mount Hood is located between the borders of Oregon's Clackamas and Hood River Counties. This scenic region is known as The Hood Territory and is part of the nearly 1.2 million acre Mount Hood National Forest.

The Mount Hood National Forest is located 20 miles (32 km) east of the city of Portland, Oregon, and the northern Willamette River valley. It extends south from the Columbia River Gorge across more than 60 miles (97 km) of forested mountains, lakes, and streams to the Olallie Scenic Area, a high lake basin under the slopes of Mount Jefferson.[5]

The Cascade Range Forest Reserve was established in 1893. It was subsequently divided into several national forests when, in 1908, the northern portion was merged with the Bull Run Reserve and became the Oregon National Forest. In 1924, the name was changed to Mt. Hood National Forest.

Mt. Hood National Forest contains 189,200 acres (766 km²) of designated wilderness area. The largest is the Mount Hood Wilderness, which includes the mountain's peak and upper slopes. Others are Badger Creek, Salmon-Huckleberry, Hatfield, and Bull of the Woods. Olallie Scenic Area is a lightly-roaded lake basin that provides a primitive recreational experience.[6]

This forest is one of the most-visited National Forests in the U.S., with over four million annual visitors. It contains 170 developed recreation sites.

Managed by the U.S. Forest Service, Bureau of Land Management, and the U.S. Department of the Interior, Hood Territory is home to two major environmental educational sites, The John Inskeep Environmental Learning Center, a 5-acre site located on the Clackamas Community College campus in Oregon City, and Cascade Streamwatch on the Salmon River, within the Wildwood Recreational Sight, in the Hoodland community.

The Inskeep Center is a wildlife habitat which also provides an environmental educational environment, with training and hands-on learning experiences. The aim of the center is to help people understand how the natural world fits into the urbanized landscape.

Cascade Streamwatch is an aquatic interpretive center which focuses on watershed and wetland protection and provides a wetland boardwalk interpretive trail for visitors.

Bark is a nonprofit organization consisting of volunteers dedicated to protecting Oregon's public forests. The group watchdogs federal land agencies to make sure the forests are managed in the public interest. One of its aims is to halt all logging and forest destruction until environmental regulations are improved enough to truly safeguard the environment. The preservation of Mt. Hood National Forest is a strong focus of the group. 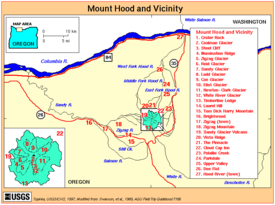 Mount Hood is estimated to be more than 500,000 years old. About 100,000 years ago, there was a major eruption that scientists have identified. During this eruption, the north flank collapsed, leveling part of the mountain's peak. As the lahar moved north down the Columbia River in the Hood River Valley area, it carried with it sediment more that 400 ft. deep. The debris left a large crevice that was later filled with lava.

The eroded volcano has had at least four major eruptive periods during the past 15,000 years. The last three occurred within the past 1,800 years. A debris avalanche formed the still visible amphitheater around Crater Rock near the summit approximately 1,500 years ago, when vents high on the southwest flank produced deposits. These included boulders 8 feet in diameter, which were distributed primarily to the south and west along the Sandy and Zigzag Rivers.[7] The last eruptive period took place in 1781-1782. This episode ended shortly before the arrival of Lewis and Clark in 1805. The U.S. Geological Survey characterizes Mt. Hood as "potentially active," while it is sometimes informally described as "dormant."

The glacially eroded summit area consists of several andesitic or dacitic lava domes. These domes formed when slow moving lava flow piled up over the vents. This piling up can eventually cause more dangerous, pyroclastic flows. The "domes" on Hood, sometimes several hundred feet high, can cause Pleistocene collapses, producing avalanches and lahars (rapidly moving mudflows).[8]

Since 1950, there have been several earthquake swarms each year at Mount Hood, generally lasting 2-6 days on each occurrence. The most notable occurrences were in July 1980 and June 2002.[9] Subduction of the Juan de Fuca Plate under the North American Plate controls the distribution of these earthquakes and volcanoes in the Pacific Northwest.

Scientists believe that Mount Hood will erupt again. Seismic activity is monitored by the USGS Cascades Volcano Observatory located in Vancouver, Washington, which issues daily activity updates. Some of the activities that the geologists watch for as impending threats are increases in temperature near the surface, more seismic activity than usual, and a greater concentration of noxious fumes from the fumaroles.[10]

Mount Hood is host to twelve named glaciers, the most visited of which is Palmer Glacier. This glacier is part of the Timberline Lodge ski area, a popular climbing route. The glaciers are almost exclusively above the 6,000 foot level, which also is about the level of the average tree line on Mount Hood.

The surface area of the glaciers totals approximately 145 million square feet (5.2 square miles) and contains a volume of about 12.3 billion cubic feet (0.084 cubic miles). Eliot Glacier is the largest by volume at 3.2 billion cubic feet, and has the thickest depth measured by ice radar at 361 feet. The largest surface area is the Coe-Ladd Glacier system at 23.1 million square feet.[11] 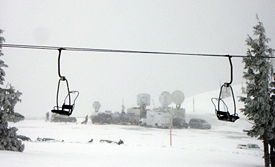 A search-and-rescue team deploys in December 2006 from Timberline Lodge.

There is some debate as to when the summit of Mount Hood was first reached: 1845 or 1857. Since those early days, hundreds of thousands have scaled Oregon's highest peak. Today, it is the most frequently climbed glaciated peak in North America.

There are treacherous conditions involved in the climb with more than 130 people losing their lives in climbing-related accidents since records have been kept on the mountain.[12]

Its status as Oregon's highest point, a prominent landmark visible up to a hundred miles away, convenient access, and relative lack of technical climbing challenges lure many to attempt the climb, which amounts to about 10,000 people per year. On average, one to three lives are lost annually.[13]

Gentle winds and warm air at access points transform into 60°F temperature drops in less than an hour, sudden sustained winds of 60 mph and more, and visibility quickly dropping from hundreds of miles to an arm's length. This pattern is responsible for the most well known incidents of May 1986 and December 2006. One of the worst U.S. climbing accidents occurred in May 1986, when seven students and two faculty of the Oregon Episcopal School froze to death during an annual school climb. The accident in December of 2006 involved three very experienced climbers. Cascade Range weather patterns are unfamiliar to many, even nearby residents. The two major causes of climbing deaths on Mount Hood are falls and hypothermia.

Another reason for the danger in Mt. Hood climbs is the shifting of travel routes. Even experienced climbers can be surprised by unexpected differences from previous experiences on the mountain. One example of this shift was reported in the spring of 2007, relating changes in the formation of the popular South Route. Reportedly, the Hogsback, (part of the South Route), shifted west, increasing the difficulty of the climb. Another change occurred when a technical "ice chute" formed in the Pearly Gates, increasing the difficulty of that climb. This change pushed some climbers to choose the "left chute" of the Pearly Gates, however; in this alternative route there is a technical ice wall 30 feet or greater in height, and with fall exposure of over 500 feet.[14]

Prior to the 1980 eruption of Mount Saint Helens, the only known fatality related to volcanic activity in the Cascades occurred in 1934, when a climber suffocated in oxygen-poor air while exploring ice caves melted by fumaroles in the Coalman Glacier. These vents near the summit are known for emitting noxious gases such as carbon dioxide and sulfur dioxide. 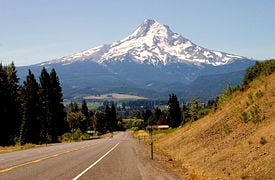 Mount Hood is home to more than 300 species of fish and wildlife. Deer, elk, coyotes, and black bear are just a few of the animals that make their home on the mountain. Along its rivers, streams, and mountain lakes, fishing for Small Mouth bass, Rainbow trout, Chinook salmon, or Steelhead is a popular sport.[15]

Some of the common birds found in the Mount Hood wetlands are herons, Canadian geese, and Mallard ducks. Hummingbirds, Western Meadowlark, Towhees, Northern Flickers, Steller Jays, Pileated Woodpeckers, and many species of hawks and owls (including the spotted owl) are among the birds that build their nests in old snags and forest groves on Mount Hood.

The mountain offers recreation year round including skiing, biking, camping, fishing, hiking, and horseback riding. One can also just relax, which is the most popular pastime for visitors to the mountain.

Hiking on over 1200 miles of maintained trails is the second most popular use of Mount Hood. Along with the evergreen forests, hikers can enjoy many varieties of deciduous trees including golden cottonwoods, crimson vine maples, dogwoods, alders, hemlocks, and cedars nestled at the 1000 foot and up elevation.

The third most popular activity at Mount Hood is downhill skiing with Timberline lodge open year round. There are also many natural hot springs and other winter sports areas along with birdwatching and picnicking sites that makes Mount Hood one of the most frequented National Forests in the United States.

Retrieved from https://www.newworldencyclopedia.org/p/index.php?title=Mount_Hood&oldid=1086776
Categories:
Hidden category:
This page was last edited on 10 November 2022, at 17:07.
Content is available under Creative Commons Attribution/Share-Alike License; additional terms may apply. See Terms of Use for details.