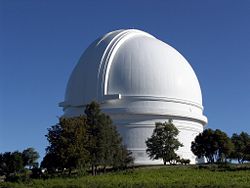 Palomar Observatory is a privately owned observatory located in San Diego County, California, 90 miles southeast of Mount Wilson Observatory, on Palomar Mountain. It is owned and operated by the California Institute of Technology. The observatory currently consists of four main instruments—the 200-inch Hale Telescope, the 48-inch Samuel Oschin Telescope, the 18-inch Schmidt telescope, and a 60-inch reflecting telescope. In addition, the Palomar Testbed Interferometer[1] is located at this observatory.

Operating some 290 nights a year in clear skies at 5,600 feet above sea level, the Hale Telescope and other Palomar astronomical instruments have made numerous celestial discoveries, including hundreds of asteroids; the Eris dwarf planet; the Comet Shoemaker-Levy 9; the first, brown dwarf star; and the most distant explosion in the universe. Although the Hale Telescope was replaced as the world's largest when the Russian telescope BTA-6 became operational in the early 1980s, Mount Palomar remains an important astronomical-research facility, working in concert with others throughout the world. 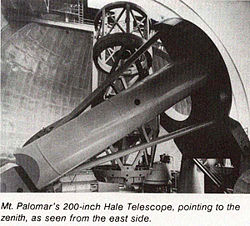 In 1928, Hale secured a grant of six million U.S. dollars from the Rockefeller Foundation for "the construction of an observatory, including a 200-inch reflecting telescope" to be administered by the California Institute of Technology (Caltech), of which Hale was a founding member. In the early 1930s, Hale selected a site at 5,600 feet on Palomar Mountain in San Diego County, California as the best site, and less likely to be affected by the growing light–pollution problem in urban centers such as Los Angeles. The telescope (the largest in the world at that time) saw 'first light' in 1948. The American astronomer Edwin Powell Hubble was the first astronomer to use the telescope for observing.

The Hale Telescope is operated by a consortium of Caltech, Jet Propulsion Laboratory, and Cornell University. It has been used to discover hundreds of asteroids. Its tenth-scale engineering model, which still resides in Corning, New York where the telescope's optics were made, was used to discover at least one minor planet.

The 200-inch Hale remained the largest operating telescope in the world until the Russian telescope BTA-6 became operational in the early 1980s. It continues to be used every clear night (averaging about 290 nights per year) for scientific research by astronomers from Caltech and their operating partners, Cornell University and the Jet Propulsion Laboratory. It is equipped with modern optical and infrared array imagers, spectrographs, and an adaptive optics system.

Innovative techniques were developed at the Corning Glass Works in New York State permitting the successful casting on December 2, 1934 of the 200-inch Pyrex glass disc for the Hale Telescope. It took eight months for the 20-ton disc to cool, after which it was sent by rail to Pasadena, California. There, the disc was ground and polished through an intensive process that would create the exact specifications needed for astronomical observations.

In the mid-1930s, construction of the observatory to house the 200-inch disc began, including a 1,000-ton rotating dome and the telescope structure, with moving parts weighing some 530 tons. However, with the fastidious project nearly complete by 1941, the United States entered World War II, thus postponing the completion of the mirror–polishing until November 18, 1947. By then, the mirror, weighing 14.5 tons, began its final, two-day trip to Mount Palomar, where it was installed in the telescope, then tested and adjusted. 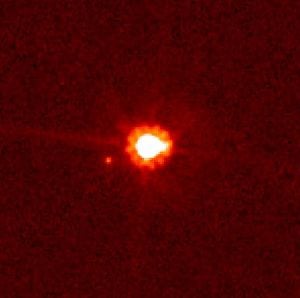 Eris, the "tenth planet" of our solar system was discovered at Mount Palomar.

Other notable features of the observatory include:

The Palomar Observatory Sky Survey (POSS), sponsored by the National Geographic institute, was completed in 1958. The first plates were shot in November 1948 and the last in April 1958. This survey was performed using 14-inch blue-sensitive (Kodak 103a-O) and red-sensitive (Kodak 103a-E) photographic plates, on the 48-inch Samuel Oschin Schmidt reflecting telescope. The survey covered the sky from a declination of +90 degrees (celestial north pole) to -27 degrees and all right ascensions and had a sensitivity to +22 magnitudes (about one million times fainter than the limit of human vision). A southern extension extending the sky coverage of the POSS to -33 degrees declination was shot in 1957-1958. The final POSS consisted of 937 plate pairs.

J.B. Whiteoak, an Australian radio astronomer, used the same instrument to extend this survey further south to about -45 degrees declination, using the same field centers as the corresponding northern declination zones. Unlike the POSS, the Whiteoak extension consisted only of red-sensitive (Kodak 103a-E) photographic plates.

Until the completion of the Two Micron All Sky Survey (2MASS), POSS was the most extensive wide-field, sky survey ever. When completed, the Sloan Digital Sky Survey will surpass the POSS in depth, although the POSS covers almost 2.5 times as much area on the sky. POSS also exists in digitized form (i.e., the photographic plates were scanned), both in photographic form as the Digital Sky Survey (DSS) and in catalog form as the Minnesota Automated Plate Scanner (MAPS) Catalog.

One of the current ongoing research programs at Palomar is the Near-Earth Asteroid Tracking program. This program makes use of the Palomar Quasar Equatorial Survey Team (QUEST) Variability survey that began in the autumn of 2001 to map a band of sky around the equator. This search switched to a new camera installed on the 48-inch Samuel Oschin Schmidt Telescope at Palomar in summer of 2003 and the results are used by several projects, including the Near-Earth Asteroid Tracking project.

Another program that uses the QUEST results discovered 90377 Sedna on November 14, 2003, and around 40 Kuiper belt objects. Other programs that share the camera are Shri Kulkarni's search for gamma-ray bursts (this takes advantage of the automated telescope's ability to react as soon as a burst is seen and take a series of snapshots of the fading burst), Richard Ellis' search for supernovae to test whether the universe's expansion is accelerating or not, and S. George Djorgovski's quasar search.

The camera itself is a mosaic of 112 Charge-coupled devices (CCDs) covering the whole (four degrees by four degrees) field of view of the Schmidt telescope, the largest CCD mosaic used in an astronomical camera when built.

The Palomar Observatory is an active research facility. However, parts of it are open to the public during the day. Visitors can take self-guided tours of 200-inch telescope daily from 9 a.m. to 4 p.m. There is a visitor's center and a gift shop on the grounds.

Retrieved from https://www.newworldencyclopedia.org/p/index.php?title=Mount_Palomar_Observatory&oldid=1086777
Categories:
Hidden category:
This page was last edited on 10 November 2022, at 17:07.
Content is available under Creative Commons Attribution/Share-Alike License; additional terms may apply. See Terms of Use for details.